1. What are the larger universal themes of this book?

Empathy — that uncovering the motivations of others and gaining their perspective not only brings about your own growth but expands your world.  You become more in touch and gain agency over your choices by taking other points of view into account.

Context — we’re each a part of a larger whole, of forces that affect us knowingly or unwittingly.  That can be said for any character in your story and it’s up to you to find out what their framework is, so you know how much is personal, psychological, or contextual.

Self-acceptance — to need others approval more than your own creates an imbalance and a loss of contact with who you are and what matters to you.  Keeping your moral compass means listening to yourself without expectation to conform and accepting that message.

Intuition — it’s more than a little voice in your head, it’s a way of absorbing the world.  Although intuitive impressions are just a part of the lineup, they’re sometimes the most reliable gage of all–provided we’ve not stuffed them down in favor of rationalizing.

Grace — a state of grace means releasing, not harboring your anger in order to enforce a sense of self-righteousness.  It means reconciling and reaching a truce both with yourself over your supposed shortcomings and with others over theirs.  It means sacrificing your ego to gain peace and not have regrets. It prepares you for the next stage, whatever it is.

2. In what way has your experience led you to question your own identity?

My presuppositions had little or nothing to do with the identity I discovered through the reunion experience described in this book.  While I had been busy constructing a persona, a certain core congealed into original state, that only intensified through these events.  Finding out what and who I was not helped me focus on what I believed.  No one can give you your identity. It’s a consensual relationship with the world and your history.  When you understand your identity, you gain insight into your destinies and how to get there.

3. What about your story makes it so important today?

There’s a huge emphasis on our differences now, what separates us and what we represent predominating who we are in humanity.  The existential questions we face require that we come together, though we’re less sure every day how to do that. Negotiating means keeping the big picture front and center, that of the greater good, and that entails retrieving the positive in each situation, holding a light to progress, and not retreating into negativity.

4. How do you define the concept of family in your memoir? Has this definition changed for you?

Family is an emotional commitment that exists outside of any usual parameters of biological relationships and yet includes those, too.  Previously I thought that finding biological family was essential. And that remains true. But family is not zero sum. There is an abundant overflow of emotion for family so that ‘real’ or ‘blood’ can exist in the same space as ‘acquired’ or ‘blended’ or ‘adopted.’  Commitment both voluntary and involuntary, is the ingredient I would describe as forming families. Mine extends to adoptive, biological, and blended family, whose meaning transcends relationship. 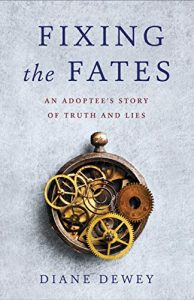 5. What has writing this memoir taught you about empathy and relinquishing your anger?

Relinquishing anger was for me an exercise in mindfulness, and that exercise had to become a practice until it was internalized and the waves of anger passed.  Writing allowed me to see how obsessive I was about my anger, how intent I was in maintaining it, as if it were a part of my identity. That layer was shed-able.  Writing about my anger transformed it into an object to deal with, instead of an internal component. But as part of being human and fallible, so anger, too, is cyclical in nature, though each cycle shortens or has less capacity to derail whenever it comes around.

For more information about Diane and her new book, please visit http://dianedewey.com.