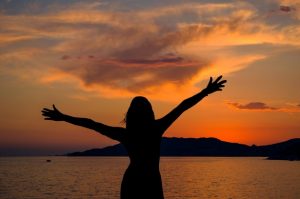 I remember the day when I came to terms with the fact that I would live and die an alcoholic. I was so defeated that I didn’t think sobriety was possible. Nobody in my family suffered from alcoholism, my friends thought I was crazy because I couldn’t stop, I thought I was different from everybody else. I reconciled the idea of being miserable and drunk until the day I die.

I lived like this for four years, until one day life as I knew it shattered around me. I lost the job I was holding onto by a thread and my family cut me off. My home was foreclosed on and I had nowhere to go. I was unemployable, untrustworthy, and homeless. I thought about my childhood and all of the dreams and aspirations I had once had for my life. I was going to be a chemist, a mother, and a wife. I was going to be happy.

I stumbled into a hospital and miraculously got into a detox, where I spent a week on a valium taper as the poison I was drowning in left my body. I was given two options, to go to a 90 day inpatient treatment center or to enroll in outpatient therapy. My past experience had shown that if I was on my own, I would drink. I needed residential treatment – no question about it.

I was scholarshiped into a rehab for alcohol where they stressed the idea of spirituality in recovery. I met this idea with judgement because I wasn’t religious, I had an analytical mind and I thought religion wasn’t for me. My therapist handed me this poster one day and it read “religion is for people who are afraid of hell, spirituality is for people who have already been there.” This was an idea I could get behind, after all, I lived in hell for years.

I began to do yoga, prayer, and meditation. I didn’t know how to do these things, but I took suggestions from others and did them anyway. Yoga have me the ability to get my mind off of the racing thoughts in my head. It allowed me to get healthy again and regain the strength that my body had lost. Prayer was a way for me to express the way I was feeling and let go of my problems. If I am struggling with something, I can give it up to a higher power of my own understanding, and know that I am not in control of life or other people around me. Meditation became a way to me to connect with the energy in my body, calm my mind, and experience a type of consciousness that I now believe is the essence of spirituality.

The foundation I built a belief upon a higher power on is the idea that I put myself in so many dangerous situations while drinking that should have killed me. I broke laws and committed crimes and I should be in jail. The very fact that I am still alive and am given the ability to walk this earth a free woman is nothing short of a blessing from something more powerful than me. I believe that my existence is a gift and that my higher power kept me alive so that I could do something good for the world. Whether it is volunteer work or helping another alcoholic get sober, I do have a purpose. My life is not a waste. Having this faith in a power greater than myself and being of service to others eventually relieved my obsession to drink.

Today I’m not a chemist. I work in the treatment industry helping others and I am an aspiring writer. I don’t have kids, but I’m still young. Instead I am an aunt – an aunt who’s niece never has to see her drunk. I’m not married. Instead I have an outstanding support group full of women who pick up the phone when I call. They show up to my house if I need them. I have yet to reach the original dreams and goals I set for myself as a child. However, I am happy today, and I have achieved more and have a more fulfilling life today than I could have ever dreamed of.

Kate is an aspiring writer and recovering alcoholic. She loves hiking with her dog, Jake, and spending time outdoors. Her passion is helping other alcoholics stay sober.