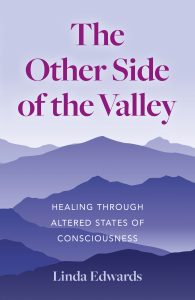 My very first experiences with ASCs came in the form of NLP (Neuro Linguistic Programming). I was a young chief executive in the health service, and was asked if I would pilot something called executive coaching. The purpose of this was to see how it could benefit other young women, who had aspirations to become senior executives. At that time, despite my rapid career progression I had not undertaken any personal development or training, other than my initial clinical degree. I therefore embarked on my coaching with an expectation that this would simply be an interesting intellectual exercise.

How wrong could I have been? I went along to my first session with my selected coach, and what transpired left me feeling deeply uncomfortable. I was asked to explore parts of myself that I had never even considered before, and to participate in some rather strange (to my mind at the time) processes. These were my first experiences of altered states of consciousness (ASCs). The results were quite amazing; after a few sessions, I found that I was feeling less stressed, and more in control of my life. It all still felt a bit strange, but I felt that I could trust my coach, and I genuinely began to enjoy the work I did with her. One day I asked her what she was ‘doing to me?’ She quite wisely told me that she was doing nothing ‘to’ me but was simply enabling me to identify and create new options and possibilities for myself. I was intrigued and enquired about how I could learn these skills to assist myself and others. There began my journey into working with and understanding ASCs.

In 1995 I trained to be an NLP practitioner with the intention of using my new skills in my exacting job as a health service executive. I discovered that I was very good at learning the processes and using these with my fellow students, however, I found that I was unable to fully allow other people to use the processes to full effect with me. Looking back, I see that I was unable to relax and let the processes unfold. I held on to a fear of letting go and allowing. At the end of each day, the trainer would guide us through a visualisation process which, I found profoundly unnerving. I would sit there with my eyes closed, mentally refusing to relax and follow his suggestions. I was terrified, literally scared stiff of letting go.

I qualified as an NLP practitioner with a very strong grasp of the mental processes of NLP without having learned much about working with my unconscious mind effectively.

During my NLP training a number of people had been talking about hypnosis. Initially, I had dismissed this as fantasy, but something clearly resonated inside of me as I began to hear about the positive experiences other people had with hypnosis. My curiosity was piqued, and I eventually found a 5-day hypnosis programme in London, which looked as if it would offer me an introduction to hypnosis. My conscious intention was that this programme would enable me to ‘test out hypnosis to prove that it wouldn’t work on me.’

At one point during the first day, something shifted fundamentally within me; I had the realisation that I was totally in control! I could choose to do as suggested by the hypnotherapist or not, I could stop the process at any time that I chose. I started to laugh. This was the kind of deep, gurgling laugh that comes when we are faced with a truism that suddenly hits us as so obvious that we can’t believe that we hadn’t seen it before. It is as if the childlike attitude of my unconscious mind had finally broken through the constraints of my very serious and adult conscious mind.

This was a huge turning point for me, a true life-changing event. In that moment I decided that I needed to understand myself more, to understand the roots of the fear that had brought me to this moment, and to start to explore the aspects of my mind that were other than conscious. The journey had truly begun. I began to be fascinated by the changes I was able to make in my life simply by tapping into different levels of consciousness. My rampant blood pressure came in to alignment, my weight rebalanced, and I began to feel I had a lot more energy and enthusiasm for life. I realised that prior to this moment I had forgotten what it was like to enjoy life and feel fulfilled.

I had also begun a practice of meditation; another way of accessing ASCs. I found that spending twenty minutes in the morning in meditation enabled me to feel balanced and relaxed as I went about my daily activities. On the occasional times when I was unable to do this, I quickly noticed that I felt really different, and my days did not go so smoothly. Lowering my brainwave activity at least once a day through meditation, self hypnosis, or using a guided visualisation CD soon became a very important and integral part of my day.

The Other Side of the Valley shares my journey from sceptic to passionate practitioner.  It blends scientific research with personal stories to create a readable blend of both. It also draws from many healing paradigms from around the world and challenges some of our cultural beliefs about what is possible. The aim is to distill reams of scientific and subjective experience into a coherent and simple approach to life.