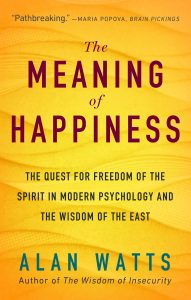 We call such things as life and death “opposites,” but this is not altogether a satisfactory name seeing that it implies a state of opposition and hence of conflict. But life and death are in conflict only in the mind which creates a war between them out of its own desires and fears. In fact life and death are not opposed but complementary, being the two essential factors of a greater life that is made up of living and dying just as melody is produced by the sounding and silencing of individual notes. Life feeds on death, its very movement is only possible and apparent because of the continuous birth and death of cells, the absorption of nourishment and the discarding of waste, which in its turn provides a fertile soil from which new life can spring. For vitality is a cycle whose completion requires both upward movement and downward movement just as light cannot manifest itself without the whole motion of the light wave from start to finish; if these waves could be divided into half or quarter waves the light would disappear. So also in the biological realm we have two opposite yet complementary sexes, male and female; beings are divided in this way in order to reproduce themselves, and the meaning of man and woman is the child without which there would be no point in having two sexes at all. Thus they are the two legs upon which our life stands, and when one is cut away the whole collapses.

These so-called opposites present man with a difficult problem, for there is a longing in his heart for eternity and victory over death, a longing which is misdirected because in life as he knows it he himself is one of those opposites and thus is apparently set against something over which he can never triumph. For the foundation of our life as we know it is the opposition between ourselves and the universe, between that which is “I” and that which is not “I.”Here again are two things which are complementary rather than opposed, for it is obvious that the self cannot exist without the universe and that the universe cannot exist without the multitude of selves and entities of which it is composed. But from the point of view of suffering, struggling man this fact, however obvious, is purely abstract. Moreover, the existence of the universe depends apparently only on the impersonal multitude of selves of which there is an inexhaustible supply; it does not depend on any particular self. Indeed, nature seems astonishingly callous and wasteful in its treatment of individual selves, and it is therefore not surprising that man should rebel when treated with the same callous disregard for individuality as is the insect. It even seems that here there is an actual conflict which does not exist solely in the mind, for with one hand nature lavishes the most amazing skill on the creation of individuals and even on their preservation, while with the other it treats them as if they were no more than the dust from which they rose. But if one or the other of nature’s hands were tied the world would either choke itself from overabundance of life or be altogether depopulated. Nevertheless, from the individual point of view the process is wasteful and callous. Man might assist nature to a greater economy by regulating the reproduction of his own kind and by adapting himself to nature instead of trying to fight it. But this requires a concerted social effort that might take thousands of years to accomplish, and hence is of little consequence to individuals living in the turmoil of the twentieth century.

However, scientific measures for the removal of suffering are here beside the point, for it is doubtful whether the resulting increase of comfort would be welcomed if it were sufficient to upset the balance of the opposites. Just as too much light blinds the eyes, too much pleasure numbs the senses; to be apparent it needs contrast. But the problem of man’s conflict with the universe remains. We can present any number of straightforward, rational solutions, justifying the existence of these uncomfortable opposites and the unfortunate but necessary operations of natural law. It is the easiest thing in the world to philosophize, telling man how glad he should be that he suffers, seeing that otherwise he would be unable to feel joy. But when it comes to the point such talk is found to be remote and abstract, leaving the heart unconvinced even if the head is satisfied.

For here we are touching the very root of man’s unhappiness, and to these regions the sweetly reasonable voice of pure philosophy does not penetrate. Whatever may be said about the need for basing one’s attitude to life on a universal as distinct from a personal point of view, the difficulty is that in the ordinary way man does not feel universal. His center is himself and his consciousness peeps out through windows in a wall of flesh; he does not feel his consciousness as existing in things outside of himself, seeing through others’ eyes or moving with others’ limbs. And the world outside that wall is threatening, so much so that he does everything possible to fortify himself against it, surrounding himself with a barricade of possessions and illusions to hide himself from the world and the world from him. Within this fortress he strives to guard and preserve the thing he calls his life, but he might as well try to imprison sunlight in a room by pulling down the blind or trap wind by shutting the door. To enjoy wind you must let it blow past you and feel it against bare flesh; the same is true of time, for the moment has always gone before it can be seized, and the same is true of life which not even this wall of flesh can hold forever. To feel and understand it you must let it blow past you like the wind as it moves across the earth from void to void.

Alan Watts (January 6, 1915 – November 16, 1973) was a British-born American philosopher, writer, speaker, and counterculture hero,best known as an interpreter of Asian philosophies for a Western audience. He wrote over 25 books and numerous articles applying the teachings of Eastern and Western religion and philosophy to our everyday lives.

Excerpted from the book The Meaning of Happiness: The Quest for Freedom of the Spirit in Modern Psychology and the Wisdom of the East.Copyright ©2018 by Joan Watts and Anne Watts. Printed with permission from New World Library — www.newworldlibrary.com.