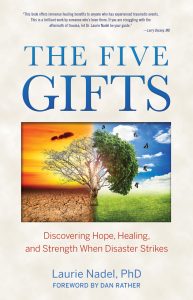 1. What led you to write this book? When did you start?

I started the book in the spring of 2012. As a reporter covering the marine environment around Long Island for “The New York Times,” I was witnessing significant change in the high tide patterns. For several years, the sea levels were covering the marshlands of the South Shore Estuary. It confirmed what I had been told by several indigenous healers whom I had met in the 1990’s. “All of Nature speaks,” they said, warning that unless we, in the industrialized North started to listen, Nature’s voice would get louder.

Soon after I started the first draft, their words rang true when Hurricane Sandy destroyed my home on a barrier island near New York City. I was one of approximately one million people along the northeastern coast who suffered extensive damages.

2. You lost your home to Hurricane Sandy. Can you please tell us about that?

The night of the storm was like the opening scene in a disaster movie that went on and on…and from what I hear, is still going on for far too many people. In my first career in TV news, we always had to battle our way through rough weather to get to work. I must have written hundreds of storm stories in the newsroom, so I wasn’t fazed when the water burst through the back of my house. But when my washing and couch were bobbing up and down in four feet of water, I knew this wasn’t just another storm. Fortunately, I was well trained in the art of staying calm during emergencies, so my partner and I were able to rescue our cat and supplies we would need later on. The town’s sewage treatment plant broke during the storm, and when the tide ebbed, everything the flood had touched was contaminated with raw sewage. There was no electricity on the island. Since the remains of my home was toxic and we had no heat, water or power, I became a FEMA refugee, carrying what remained of my life from airport to airport as I crashed with family members and friends. A catastrophe shows us who our real friends are and I am ever grateful to everyone who helped.

3. What led you to start two long-term support programs for people on the barrier island who were traumatized by losing their homes to a natural disaster?

When the electricity came back one month later, I returned to the barrier island to camp out in a family member’s apartment. There were volunteers from around the country who had come to help people clean out moldy debris. While I couldn’t strip sheet rock, could do heavy emotional lifting. In my twenty years as a trauma specialist, I had directed a program for teenagers whose fathers were killed in the World Trade Center and worked with hundreds of people whose lives were shattered by assault, accidents, and other catastrophic events. When I submitted my proposal and CV, the City of Long Beach opened the courtroom for us to meet every week. Two years later, as people reported higher levels of anxiety and Post Traumatic Stress Disorder, I was invited to start a new group at St. James of Jerusalem church where we focused on the deeper, long-term psycho spiritual issues arising from ongoing financial trauma and institutional betrayal. (The Five Gifts is the first book to address the long-term financial trauma resulting from a catastrophic event.)

4. What are The Five Gifts? How did they come to you?

If the night of the storm was the first scene in a disaster movie, the next year was an exercise in sheer survival. If you had a mortgage, the bank that held your paper seized your insurance settlement check and doled it out after your construction project passed certain inspections. My paperwork—and that of hundreds of thousands of Sandy survivors—got “lost” multiple times. We spent hours on the phone every day being lied to and accused of not having complied with paperwork demands which we then had to resubmit again. (I thought it was just happening to me until it became the lead story in our local paper. “The bank. The insurance company. The government. They are not your friends,” a lawyer told me after I hired him to fight off an extortion threat from a demolition company.)

My stress levels went through the roof when the bank tried to get my property insurance canceled so they could put me into a high risk pool where premiums would triple…well, I lost it.

Then it hit me. If I was my own client, what would I tell her to do? Since becoming a therapist in the early 90s, if there was one personal lesson I had learned it was that it is very hard to live your own advice. I try not to give advice to others; rather, I see my role as facilitating discovery so that the other person has an “Aha!” moment about the question that was troubling him. Maybe I am a slow, stubborn learner and it took something like this to wake me up but my “Aha!” moment was realizing that if I was my own client, I would tell her to take 48 hours off. No phone calls about anything to do with the storm damage. No emails. No conversations. I would tell her to do whatever she needed to do to relax.

Despite the cold, I took a few bracing walks along the ocean. Got a massage. Drank lots of water. Took naps. And when my mind finally stopped racing, I sat in a wide leather chair overlooking the ocean and meditated. I asked my Unconscious to show me my future self. The real question bubbled up: Would I have a future self or was this it for the rest of this incarnation?

As my breathing slowed, I entered a quiet mindspace; translucent grey, like the inside of an oyster shell. In the background, an unlikely afternoon wind swept in from the southwest: a wind that spoke of summer, and sunshine, and a new season. My heart opened to that hope and I heard a quiet inner voice: “Humility. Patience. Empathy. Forgiveness. Growth,” it said.

Then came a message: “Write them down. These are the gifts you need for healing. Give them to those who need them.” These gifts became my foundation for believing that things would improve.

5. Are they like the five stages of grief? How do they differ?

Elisabeth Kubler-Ross who developed the five stages of grief, told one of her students that she never meant for them to be taken as sequential steps. Grieving is complex and emotions frequently blend, mix and blur. Denial. Anger. Bargaining. Depression. Acceptance. They don’t necessarily follow in 1, 2, 3, 4, and 5 sequence. I believe the Five Gifts allow us to be kind to ourselves when we are in pain. They can help alleviate the harsher elements of grief. Humility allows us to accept the unacceptable. Patience is the gift that helps us when we are still hurting long after we thought we would be “over it.” Empathy is what allows us to connect to others…to receive their support and to support those we love who are also grieving. Forgiveness often means forgiving ourselves for not having been able to prevent the loss. Growth is how we look back and say that while we never would have wished for that to happen, we wouldn’t be who we are today if we hadn’t gone through that.

6. You talk about “gratitude guilt.” What do you mean?

It’s hard enough losing someone you know to violence, or becoming a survivor or a witness. Even first responders who are trained to deal with life and death situations are often disturbed by what they see, hear, and smell. As civilians, we are even more vulnerable to feeling flooded and less likely to be thankful in that moment. But it is not uncommon for hear comments like, “At least you aren’t living in Syria. You should be grateful.” Being told what to feel, then feeling guilty about not feeling grateful for a traumatic experience only serves to prolong heartache. Getting to gratitude usually takes time.

We tend to think of forgiveness as an on-off switch. It’s either yes or no. You forgive or you don’t. But if we think of forgiving as a process that fluctuates, it can be to forgive a little bit at a time. Maybe today, we can forgive 10 percent and tomorrow 43 percent and then only 4 percent. You may never be able to forgive that person or event 100 percent but forgiveness is a gift, not a regulation.

8. Is it possible to prepare for a sudden, violent event? (Sometimes yes, sometimes no.)

In terms of prepping for seasonal events like blizzards, wildfires, and hurricanes, packing a psychological go-kit can help you stay calm throughout the event. Chapters Two, Three, and Four have practical tips for getting ready to stay steady. But when you expect the unexpected, it is easier to allow for the possibility that anything can happen. We can learn from the mindset of people in other countries who have lived with war, terrorism, and repression about how to stay balanced when the world around them is in turmoil.

9. Why has PTSD become a household word?

Trauma is a word that has become interchangeable with “upsetting.” But trauma is not a bad hair day. It means you have survived, escaped, or witnessed a sudden, violent event. Or you have lost someone due to such an event. There has been very little accurate reporting on the difference between acute stress reactions that occur immediately after an event and post-trauma reactions that can surface months or years later. Without a real understanding of trauma and how it can affect people down the road, PTSD gets tossed into the narrative whether or not it is appropriate.

10. Does everyone have PTSD? Can you get PTSD from watching MCI’s (Mass Casualty Events) on TV?

Please see #9. Only eight percent of Americans are believed to have PTSD—that’s more than 24-million people—the population of the state of Texas. I believe that millions of us suffer from Vicarious Traumatization (secondary PTSD) due to hours of exposure to violent images showing the aftermath of MCI’s.