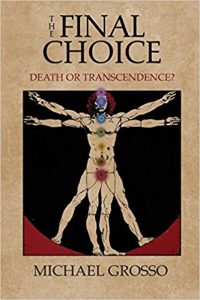 This post is an excerpt from The Final Choice: Death or Transcendence? By  Michael Grosso

Sketch of a Science of Transcendence

It is true that advance is partly the gathering of details into assigned patterns. This is the safe advance of dogmatic spirits, fearful of folly. But history discloses another type of progress, namely the introduction of novelty of pattern into conceptual experience. There is a new vision of the great Beyond.
—Alfred North Whitehead

The Riddle of the Sphinx

The curious center of experience I call myself—will it cease and come to nothing with the death of my body? Or will it flicker on and even know a greater life? Does our center of awareness persist, contract, or widen perhaps as Plato and Bergson thought; grow more dull or more brilliant; divide by fission into a plurality or fuse in new ways with other centers of consciousness?

The survival problem raises the riddle of the Sphinx, the riddle of what it is to be a person, treated by analytic philosophers as a puzzle about personal identity, and by the rishis of the Hindu Upanishads as an experiment in the pursuit of higher consciousness. The modern scientific answer to the riddle is well known:

A human being is a physical object, unique in many remarkable ways, but essentially a complex machine. The language of mind, soul and spirit is treated as a hold-over from folklore. And to say that human consciousness survives bodily death is treated as barely thinkable. I as a person can no more be separated from my body, it is said, than roundness can be separated from the penny in my pocket. But the evidence of psychical research—especially the more challenging survival data—clashes with this orthodox answer to the riddle. There are too many facts that contradict the prevailing one-dimensional view of the Self.

The Origins of Psi Science

The English origins of psychical research in 1882 were linked to a quest for evidence of life after death. Along the way the researchers discovered many things about the depth and complexity of the subliminal self—before Freud’s work. Frederic Myers, for instance, wrote in his great work, Human Personality and Its Survival of Bodily Death:

The ‘conscious Self’ of each of us, as we call it,—the empirical, the supraliminal Self, as I should prefer to say—does not comprise the whole of the consciousness or of the faculty within us. There exists a more comprehensive consciousness, a profounder faculty, which for the most part remains potential only so far as regards the life on earth, but from which the consciousness and faculty of earth-life are mere selections, and which reasserts itself in its plenitude after the liberating change of death.

Myers called this “more comprehensive consciousness” the subliminal Self— an idea close to that of Jung’s objective psyche or Self. These terms are reincarnations of the older, religiously derived, soul, a word rejected by scientific orthodoxy. The work of Myers and the early psychical researchers, and the more recent work of Jung speak to the empirical reality of the world-old idea of the soul.

The overarching concern of the early psychical researchers was to found a new science of the soul. As Myers wrote on the first page of his magnum opus, the method of science “has never yet been applied to the all-important problem of the existence, the powers, the destiny of the human soul.” Scientific research like this is still somewhat of an outsider, on the fringe of respectability. Still, a steady if sparse stream of researchers has increased the stores of our knowledge.

At first glance, the function of psychic “abilities” is not clear. There are no physical organs associated with them and no real evidence that we can learn to use our psychic abilities in any practical and reliable fashion. Suppose that the primary function of psi in nature is to mediate an order of reality different from our embodied existence. The consistent elusiveness of these abilities would begin to make more sense. If the function of psi is essentially otherworldly, then we shouldn’t be surprised how transient and marginal the effects tend to be in our worldly environment.

We normally rely upon the sensory-motor system for engaging the material environment. Psi’s day-to-day survival value in the terrestrial struggle for existence seems to be slight and inessential. The function, in fact, seems to be more about reminding us of our transcendent potential than, say, winning the lottery or making a killing on the stock market. It seems in fact to transcend worldly needs and points toward some dimension the beyond.

What at bottom drives all living things? The goal of life seems to be more life, self-replication with infinite variations.The life process consists of the reproduction, expansion and increasing complication of its genetic legacy. The tendency among mammals, and humans in particular, is toward greater mobility, freedom, and detachment from the environment. Human life is especially mobile and already has begun to move beyond the planetary habitat to explore outer space habitats.

If the goal of life is more life—in a word, survival—the function of our nonphysical psychic potential may be to mediate survival of bodily death. The spiritual world would name the stage where the evolution of life transcends the physical environment.

If the goal of life is more life, higher, freer, more complex forms of life, then our psychic potentials represent the power of life transcending its biological template. Psi is the wedge of life driving against the constraints of physical reality, against the boundaries of time and space. Psi is the medium in which new forms of life carry us beyond the boundaries of the physical environment.