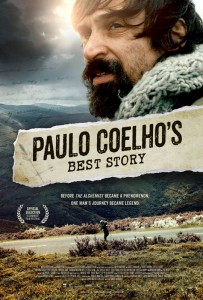 “When you want something, all the universe conspires in helping you to achieve it.”

This famous quote was written by a man who searched decades for his calling and encountered unimaginable trials along the way. Paulo Coelho, author of The Alchemist, was committed to a mental institution by his parents at age 17 for his untraditional path and willingness to follow his calling and dream of being writer. His parents literally thought his dream of being a writer was a possible sign that he might be mentally unstable and reason to be committed to a mental institution. Now, he is known as a literary genius who is the New York Times bestselling author of 30 books that have sold over 165 million copies world wide.

This past summer a biopic feature film about his life, PAULO COELHO’s BEST STORY was released in limited theatrical markets in New York City and Los Angeles. It is also be available on demand via Amazon Instant Video and Amazon Prime.

For information about how you can watch it, you can visit:
www.MusicBoxFilms.com/PauloCoelho

I had the chance to watch the movie and was impressed because it reveals Paulo’s humanity. It shows his struggles as a misunderstood child, intense arguments he had with his parents, and his unwavering commitment to stay true to his calling. Throughout the film, we also see Paolo’s experimentation with drugs, him falling in and out of love, and him developing his interest in signs or synchronicity that guide his path. The part of the movie that really touched me was that Coelho always stayed true to his calling and a willingness to be open to synchronicity in spite of external circumstances in his life that most people would say is an indication that he has gone mad.

The magic of the film is that it captures and follows Coelho’s very human and real struggles from his humble roots to his authentic journey as a writer who has inspired the lives of millions.