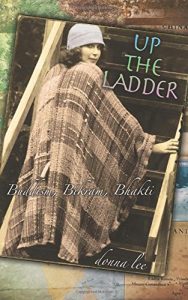 By Donna Lee, author of Up the Ladder: Buddhism, Bikram & Bhakti

When I returned from a trip to India, some of my neighbors asked me why I would go to a country as challenging and arduous as Mother India, Bharat Mata. I told them to consider me a spiritual archeologist and that I just had to know more about Krishna. The famous Beatle, George Harrison wrote; “Everyone is looking for Krishna, they just don’t know it.”

However, what most of us do know is that India is yoga’s motherland. But do you know that yoga is way more than physical postures or asanas? Yoga means to link with the supreme and yoga disciplines will take us on a transcendental journey to God. You do not need to enter a yoga studio, or even begin a hatha-yoga practice to be a yogi. Simply put, you just need the desire for self-realization. Self-realization is freedom from external coercion. Self-realization means to know what your purpose is and why you are here on this planet at this time. Self-realization is honing in so closely that you realize that Krishna or God is the source of everything. And with that knowledge you are no longer lonely or hungry or searching, you have found the vein of gold. But you have to come to this through disciplines and with such intense desire that nothing other than God realization will do. You have to be so tired of materialism and so defeated and so disappointed by the insufficient and unrewarding way of life that you are living before Krishna will respond. God realization is not casual. We have to beg for mercy; we have to cry out, and there can be no other need more demanding than to know Krishna. When this occurs you are in the throws of self-realization and from that very moment forward, your prayers will be answered.

The Bhagavad-gita or The Song of God is the most important book on yoga you will ever read. There is no end to its importance; and as truth is always revelatory, the Gita, as it is fondly known, will always reveal itself in the exact ways you need. The Song of God begins on a battlefield where Krishna, not yet known to his friend Arjuna as the Supreme Personality of God, begins to speak. Arjuna is faced with a situation that vexes his soul and makes him question everything he has ever learned. As the conversation begins, Arjuna is plagued with doubt and Krishna, as friend and charioteer imparts the ultimate knowledge of self-realization.

And now I will share with you the most thrilling and esoteric discovery; the road to self-realization leads us to LOVE. The innermost secret of the Bhagavad-gita and yoga is discovering the Supreme, all sustaining, loving relationship with Krishna. “We are all looking for Krishna; we just don’t know it.” Everyone wants love. Bhakti yoga, the yoga of love is the supreme reward for realizing dejection, despair or a broken heart as Krishna’s mercy because nothing other than loving the Lord will ever be as fulfilling. Bhakti yoga is the highest rung on the yoga ladder. To achieve this transcendental state all you have to do is chant the Maha Mantra. The mantra is a spiritual call to the Lord, meaning, “Oh energy of the Lord, please engage me in the loving service of Lord Krishna.”

Chanting of Hare Krishna surpasses all lower stages of consciousness, namely sensual, mental, and intellectual. There is no need to understand the language of the mantra, nor is there any need of mental speculation, nor any intellectual adjustment necessary to chant this great mantra. Anyone can take part in its transcendental sound vibration without any previous qualification. Just sing:
Hare Krishna, Hare Krishna, Krishna, Krishna, Hare Hare; Hare Rama, Hare Rama, Rama Rama, Hare Hare.