Elders are laboratories of mystical germination. We have the time, quiet, and wisdom to flower as mystical beings. As the levels of mystical consciousness expand among enlightened Elders, increasing numbers of people of all ages will be subtly affected through the unity of being, raising their levels of consciousness toward a tipping point with evolutionary significance. How many Divine Humans would it take to create a more mystically attuned human culture that in turn would stimulate the growth of a new level of collective awakening?

Very soon, a third of the American population will exceed sixty-five years of age. If ten percent of these Elders achieved significant levels of mystical consciousness – roughly half a million people – the ripples of love, peace, and joy throughout the world could reach a tipping point. Indeed the founder of Transcendental Meditation predicted in 1960 that if even 1% of the adult population practiced meditation, violence and crime would decline appreciably. Subsequent studies in peer-reviewed journals confirm his predictions in local settings. As enlightened Elders, we have an amazing opportunity to contribute to the expansion and evolution of human consciousness and civilization. Let’s use this opportunity!

Spend 15 minutes going deep for answers and then review what you’ve written. Look for gems and insights that move or surprise you. Whatever you learn, your consciousness will grow.

The old learn to live very differently from the middle-aged, giving up what they have built their lives around, including work, work relationships, parenting roles, and long-range plans. Aging represents a profound movement from the conventional world of duties and goals into the sacred present and the Presence of divinity. It is an initiation into a new dimension of life, a transformation of self and consciousness, and the discovery of a new and sacred world. If we consciously surrender to this process, the False Self and False World steadily disappear in the magic of transformed consciousness. Fresh, pristine, precious, amazing, enchanting, our perception soon reveals the divine beauty of the world and its beings. In the end, sages, mystics and enlightened Elders are a community’s treasures filled with light and love, teaching and wisdom, morality, and courage. 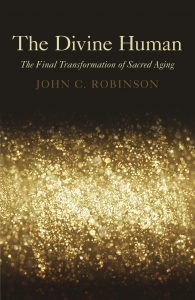 John C. Robinson is a clinical psychologist with a second doctorate in ministry, an ordained interfaith minister, and the author of nine books on the psychological, spiritual and mystical potentials of the New Aging. He is the author of The Three Secrets of Aging, Bedtime Stories for Elders, What Aging Men Want and Breakthrough.

You can find out more about John’s work at http://www.johnrobinson.org