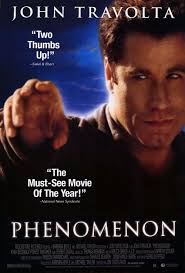 Twenty years ago Jon Turteltabu directed a movie called Phenomenon starring John Travolta (George Malley) and Kyra Sedgwick (Lace Pennamin) that went on to make over a $152,000,000 at the box office. The movie revolves around the life of a small town auto mechanic, Malley who is not the brightest star in the night sky.

All that changes in just one night for Malley after he goes out of a bar and gets hit in the head by a mysterious bright white light. On waking, Malley finds that he now has phenomenal powers that enable him to discern things before they happen, learn new languages exceptionally quick and be able to predict things about to happen in the future. Malley is determined to use his new found powers for the good of the small suburban town in Northern California but some of the townfolk are scared, jealous and upset over Malley’s new transformation.

The plot thickens when Malley intercepts and cracks the code from a nearby airforce base which gets him in trouble with the FBI. Malley eventually gets hit in the head again by the same white bright light and doctors find out that he has a rare brain tumour which eventually takes his life but not before he does more good for his small town and leaves them with a lasting impression of his remarkable powers.

The Malley phenomena is attributed to psychoktelekinetic, an extra ability of mind power that allows you to know and do things that other individuals generally cannot. Individuals who possess telekinesis have a remarkable sense to be able to make predictions that come right more often than wrong.

Some people believe that telekinesis has to do more with chance or luck but someone who works on their telekinesis skills can develop the probability of being right more often than wrong. Individuals who develop this ability can take advantage when playing casino games such as blackjack and roulette.  While playing these games, an individual with telekinesis will have the ability to have a 6th sense to know where the ball will land in the roulette wheel or what cards will be flipped over in the next blackjack move.

While telekinesis might appear like a supernatural power, demystifying the word can make it a lot more real. Some of the other words that are in some ways similar to telekinesis are instinct, intuition, inner-knowing and a gut feeling. The only way to see if you possess any of these abilities is to listen to your inner conscience and see if your predictions are right or wrong.