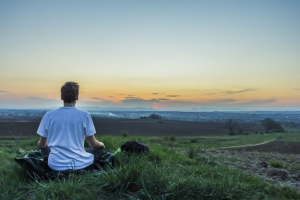 I’ve always admired people who, as they say, see the glass as half-full. I’ve always aspired to be that type of person — someone who always finds a way to seek out the light when we’re shrouded in darkness.

And actually, some of the most optimistic people I’ve ever met are in a group that some people find surprising: recovering addicts.

I know from personal experience that addiction is a lifelong battle. Anyone who has struggled with the disease can tell you how easy it is to feel like you’re constantly battling demons — that you’re forever alone, frightened, and defeated.

But that’s why I’m so inspired by my fellow recovering addicts: while much of our journey has been filled with times when it was much easier to allow ourselves to be overwhelmed by negativity, so many of us actively work on seeing the world for the beautiful place that it truly is — and they have advice that all of us, addicts or not, can learn a lot from.

John shared an inspiring story with me about how he worked to see the silver lining during an especially trying time. After graduating from his recovery program and moving out of his rehab facility in December, he was excited about being able to be back home with his wife and children. But the transition wasn’t quite as smooth as he’d planned. John’s wife, while eager to be with her husband, was still hurt and needed her own time to heal — without John in their home.

“I was still around taking care of my kids and being involved with them,” John remembered. “Then my wife started to trust me to come home for two nights a week, so I started coming home on weekends.”

Even still, there were some weekends where she asked him not to be there. While John respectfully obliged, it was still a painful experience. “I’d have a dabble of being back in family life, and then it would be taken away,” he said.

John admits that it was difficult getting only a glimpse of life at home with his family. But rather than let the situation wear him down, he decided to have a more positive perspective.

“It sucked — but at the same time, it allowed me some space to keep working on me. I was able to read more and to journal more.”

The energy John channeled into focusing on the positive aspects of his situation were worth the effort, and he moved back home with his family a few months later. He and his wife now use their blog, Mabry Living, to encourage others to stay positive on their own recovery journeys.

Sometimes, when seeking a sober life, people battling addiction learn a heartbreaking fact: some people are simply too hurt by mistakes we’ve made in the past to continue their relationships with us.

I know this to be true. And I wish I’d been able to view my situation the way Sally chose to look at hers.

“My best friend, Jenna, and I lost one of our other best friends of 16-plus years because she didn’t understand,” Sally said.

Despite her loss, Sally refuses to be anything but positive, and says she will always welcome the friendship back with open arms if the opportunity arises.

“Maybe someday she’ll be ready,” she said. “They will teach you in rehab that you can’t expect to come home and everything is going to be fantastic or that everyone will understand.”

She has this attitude when it comes to her professional relationships, too.

“People have really embraced me since coming back to work — but I also have to accept the ones who don’t.”

All of us, whether we’ve struggled with addiction or not, face hard times. A lot of them. And sometimes, maintaining a positive outlook feels like an impossible (or infuriating) task. But as John and Sally demonstrate, it’s possible to shift our focus to brighter horizons. Even if we need to take a moment or two to allow ourselves to feel hurt, we don’t have to stay there for long.

This is something that I continue to learn in my sobriety, and as Sally pointed out, is a skill that takes practice.

“How I’m going to react to a situation based on what I’ve learned during treatment is really neat to me,” Sally said. “I think about how I would have handled a given situation in the past and how I do now, and it’s completely different.”

If you’re working on taking a more upbeat approach to discouraging situations like I am, I hope you’ll keep at it, and know that this skill is worth practicing.

As Sally said, “We’re all going to be a work in progress forever — and that’s OK.”

Michelle Peterson is a proud recovering addict. She is fighting to eliminate the stigma against those who suffer from or have suffered from substance abuse and addiction. She created RecoveryPride.org to spread messages of hope and help to those in recovery, those wishing to be in recovery, and their loved ones. When she isn’t building the site, she enjoys running and crafting.