1. WHAT PROBLEM YOU ARE ADDRESSING IN YOUR NEW BOOK?

We all know that American politics suffers from extreme polarization. Just as the middle class has faded away from our economy, the bipartisan “middle” has dropped out of our political process. In the last two decades, moderates have become far less prominent, giving way to ideologues on both sides of the aisle. As a result, our Congress is virtually unable to legislate because politicians on the left and right insist that they have all the answers. They focus on shutting out the other side with parliamentary maneuvers that were once rarely used, including the total abuse of the filibuster. They even stoop so low as to demonize the other side. They very often refuse to work with the President if he is from the other party. This behavior is a far cry from the bipartisan approach to solving problems we once had and that made us great. Our unity as a country is falling apart, and we need to renew ourselves by finding a sacred vision of national unity.

Addressing this division of American into “red” and “blue” is urgent. With the approach of 2016 elections, the prospect of dysfunctional gridlock looms even larger, further crippling our ability to tackle urgently needed reforms. Too many in Congress seem to love their party more than their country. But the fast-growing transpartisan movement offers the answers to this problem. I embrace its analysis of the problem, but I add to that a psycho-spiritual or visionary dimension that is drawn from the findings of transpersonal psychology and the wisdom traditions of both the East and West.

2. WHAT IS MEANT BY TRANSPARTISANISM?

It means that Americans can rise above these damaging polarities. Transpartisanism provides hope that, if we supply the right intention, we can hold to a vision that honors the ideals of both the left and the right. No one can be 100 percent right or 100 percent wrong. We can transcend the divisions by embracing the truths of all the parties while leaving behind their excesses or errors. And it takes dialogue and maturity to sort that out.

You can be a Libertarian, Republican, moderate, Democrat, or a socialist and have an important piece of the truth—but this singular truth you stand for, such as “liberty” or “social justice” or “economic growth” represents nothing but a selection from a larger set of sacred American principles. To attain insight into these principles I propose a sacred vision. The new America I envision will honor all political perspectives, seeing each as a valuable yet incomplete contribution toward the emerging whole. In other words, we need to grow up and evolve, rather than attack each other and fight.

3. SAY MORE ABOUT WHAT DO YOU MEAN BY “SACRED AMERICA”?

“Sacred” is a word that binds us together in the mystery of life and links us into a single human family. In a truly sacred world, no one is ultimately our enemy. A sacred worldview leads to a life filled with respect and reverence. We then connect the term “sacred” to America. America means many things to the world, ranging from a shining city on the hill that flies the flag of freedom to a feared military empire. Much can be said about the current state of America’s character, but perhaps the most essential is that America has a pioneering spirit, always experimenting to find something that works better, never resting for long on our past, always seeking the next higher possibility or the newest frontier. We are not a country that stagnates for long; America is a roaring engine for evolution.

It is that spirit of innovation, adventure, and possibility that needs to inform this exploration of what happens when “sacred” and “America” come together. Sacred America, Sacred World is a call for us to reach for our highest destiny as a country. I believe our truest destiny is not built on our desire to be number one, but is rather a humbler sense of calling, animated by a spirit of service to all. We are called to explore new frontiers politically, economically, and even spiritually, not just in service to our own citizens, but in service to the world.

4. WHAT ARE WE SHIFTING TOWARDS POLITICALLY, AND GLOBALLY?

I believe that we are transitioning to a truly global era in which we will, once and for all, eradicate war and unite as a human family as never before—which requires first of all that we create a “reunited America.” We see the advent of a united world happening remarkably rapidly in the realms of technology, travel, and business. But it’s also happening with our consciousness and our politics. We’re increasingly becoming global citizens first, national citizens second. I believe America simply must play a leading role in this transition, embracing it as the path beyond the waste and tragedy of war and towards real health, sustainability and prosperity for all. I believe the pathway forward requires the best of both progressive and conservative values and a collaborative style of politics that seeks higher ground. Global accords and councils will replace the endless posturing of the military era.

5. YOU SAY THAT YOU ARE A PROGRESSIVE WHO HAS LEARNED A LOT FROM CONSERVATIVE VALUES? SAY MORE.

I used to be a more strident progressive who would see conservatives as the problem rather than part of the solution that represents a complementary value system. Conservatives tend to focus on preserving what has worked in the past, which is a useful function. Consider this analogy: In the human body, we have strong elements required for health that basically protect our homeostasis. Too much change happening too quickly is dangerous for our body and for life. Conservatives often play the same role in a society, minimizing the risk of chaotic change and preserving core values, commitments, and culture. Having a strong foundation actually allows us to grow further and so I have evolved to see and honor conservatives for their role in maintaining traditions and American character even while I still focus on the ways we are naturally evolving to another level­—a “more perfect” union.

As I explain in the book, I’ve found that embracing conservative values and perspectives is a good form of “cross-training” in my role as a spiritually-based CEO, where it’s imperative that I not risk everything on each new idea. The Buddha taught the Middle Way as the more enlightened path and that also applies to drawing upon the best of conservative perspectives while opening to new possibilities for innovation and cultural expression, which tends to be the focus of progressives.

6. WHAT DO YOU SEE AS SOME OF THE MOST SIGNIFICANT SHADOW ISSUES THAT AMERICA HASN’T FACED?

There are many interrelated shadow issues that America is often reluctant to face but I think at the root is an unwillingness to see ourselves as the aggressor and victimizer.  Ultimately, this stems from never being able to face the Native American genocide and African enslavement that formed the twin sins of our early history. If we undertake a much deeper healing of these wounds, which will require humble contrition and an inventory of our shadow side, it becomes easier to see the ways that we are still perpetuating injustice and oppression in the world. 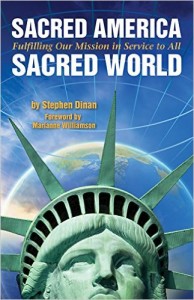 We can all do outreach and healing work ourselves and ultimately it’s helpful to have a kind of national healing and reconciliation, with public apologies the way Australia did with their native peoples. If we’re in denial more generally, it’s hard to own the specifics now. We also have a large shadow issue around unaccountable forces exerting a lot of power domestically and internationally, from finance to covert operations.

7. ULTIMATELY, HOW DO WE MOVE BEYOND WASHINGTON GRIDLOCK?

I don’t see the answer as simple but it begins with seeing the intrinsic, sacred value in other perspectives, even ones we strongly disagree with. When we start identifying only with one group “against” another, we slowly start turning them into caricatures and demeaning them in various ways. This process of polarization has gone on for a long time with political parties. So I think the ultimate solution is very personal; it’s about building bridges of curiosity, respect, and understanding, and recognizing that true, lasting solutions to extremely complex problems require the best thinking of both parties and ideologies so that some hybridization of solutions is going to be best.

We may not come to consensus on major issues but we can come into deep dialogue and human exchange. Reaching out a hand of friendship across the aisle is ultimately one of the most important things we can do as citizens. The women members of the Senate have been a great example in that regard, often creating breakthroughs through their very personal connections with members of the other major party.

Stephen Dinan, a noted social entrepreneur and political strategist, is the CEO of The Shift Network, and was previously a senior staffer for both the Institute of Noetic Sciences and Esalen Institute. The author of Sacred America, Sacred World: Fulfilling our Mission in Service to All (Hampton Roads, July 2016) and Radical Spirit: Spiritual Writings from the Voices of Tomorrow (New World Library), he is a graduate of Stanford University and holds an MA from the California Institute of Integral Studies. Dinan is also a member of the prestigious Transformational Leadership Council and Evolutionary Leaders groups.