I did not set out to write a story of the heart. But sometimes, stories find us.

It was surprising then, when the story frightened one editor and, once published, a number of my readers.

I have had to list my book under Horror. Yet, it is actually in the tradition of the literary fairy tale. Nadia’ s Heart is an allegorical tale about a young girl whose heart has in fact been removed, through magic, as a result of the actions of an Evil character in a distant land. Our heroine becomes the key to saving a generation of children whose hearts are vulnerable to removal, soon to be replaced by stones.

The story is a metaphor about what the heart symbolises beyond the limits of romantic love, how evil can overtake hearts that are vulnerable, and what happens when our heart becomes joined to something greater.

It is not so incomprehensible. We understand metaphors on another level. Yet why is the story equal to, or more frightening than, zombies eating brains, or blood being drained by immortal vampires? Neil Gaiman’s stories have dealt with the gore of characters losing their eyes (The Sandman, Coraline). In Nadia’s Heart, characters lose their hearts and tongues. Nadia’s Heart also explores the implications of ‘losing’ such symbolic organs, and the wider impact of this magic upon four interconnected worlds. In promoting the book and understanding its audience, I have had to delve more deeply into the story’s impact upon the psyche.

Is the Heart Synonymous with the Soul?

The heart has always been a source of fascination to writers—and readers—of myth and theology throughout the ages. The word heart appears in over 900 instances in the Bible. When we speak about the heart, it conjures up a handbag of terms that are sometimes synonymous, and sometimes hard to separate. The emotions. The will. The soul. A connection to something greater. These are all things we associate with the steadfast organ.

There are clues to the soul being hidden in the heart, and there are many ancient folk tales that hint at this notion. In the past, and even today, a wide variety of cultures have explored the heart’s separation from the body as a means of protection. From the Norse myth of The Giant Who Had no Heart in his Body, to a very recent blockbuster movie: Pirates of the Caribbean: Dead Man’s Chest (Disney, 2006), a person whose heart or soul is removed and hidden in a distant place for safekeeping is a recurring theme in storytelling. The heart of Davy Jones is sought in a locked chest in order to change the fate of many, and millions of audience members worldwide had to suspend rational belief, for Jones is still mobile, without said heart. Here, the story of Jones’ heart is linked to romantic love, but the repercussions of its power extend beyond a love story.

In the Disney children’s tale Snow White (1937) and in Snow White and the Huntsman (Universal Pictures, 2012), an evil Queen sends a hunter to remove the heart of Snow White, so that she might consume it for its power. In Philip Pullman’s The Golden Compass (2007), the souls of children are in danger of being severed from their bodies by evil forces and authorities.

Certainly not ‘just for children’, the literary fairy tale continues the tradition of the fairy tale and does not shy away from dark themes. Such stories were intended to mimic real lessons or experiences of life, and were used for both entertainment and instruction. A person’s soul or heart can be vulnerable to forces bent on harming, possessing or even killing it – whether they be individual, malevolent or authoritative.

The Heart as Gateway

Nadia’ s Heart delves not into the common, romantic notion of eros, but instead sheds light on agape: a deeper, transcendent notion of love. It is an allegory whose symbolism speaks to the deeper yearnings within the human psyche: love, loss and existential longing.

Is the heart a gateway to a macrocosm, to another, more profound plane, where our hearts are joined to something greater? Nadia’s Heart certainly aligns with this notion, as Nadia’s heart (to be revealed in Part Two) becomes joined to a great ‘Ruler Unseen’.

The Heart is on the Brains of Many Today

These days, it seems, everyone is talking about the heart. From the recent film, The Power of the Heart (2014), to organizations such as the Heartmath Institute, to recipients of heart transplants, humanity has begun to realize that there may just be a superior intelligence beyond the limits of the mind – beyond linear thinking. 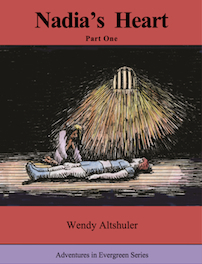 How do we tap into, experience, and live from our hearts? Why do some live more from their hearts than others? When did we lose the ability to incorporate the intelligence of our hearts, and become ruled by the inferior guiding system of the mind?

Finally, and most of all, the allegory of the heart speaks to man’s incomprehension of the untapped, and heretofore widely unexplored, treasure within.

To read more about Nadia and the mythical heart, visit http://arborgate.net.