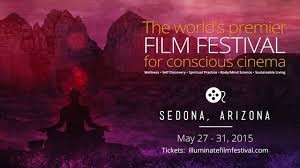 The second annual Illuminate Film Festival will bring to screens 22 inspirational, thought-provoking films to Sedona, Arizona May 27th — May 31st. During five days of life-affirming, evocative and engaging cinematic works, audiences will ponder their existence, experience radical transformation and access some of the leading movers and shakers in the emerging genre of conscious cinema.

According to ILLUMINATE’s Executive Director Danette Wolpert, “The films we selected this year act as catalysts for more expanded, heart-centered experiences.” Wolpert moved from the mainstream indie film festival world to seek out and share cinematic gems with content that empowers viewers to live kinder, wiser, and more enlightened lives.

SOLD– an award-winning drama executive produced by acclaimed actress/producer Emma Thompson, based on real-life events It tells the story of a young Nepali girl’s struggle for survival after being sold into prostitution in Kolkata and how her faith, Bhakti practice and the memories of her mother give her the courage to endure. American photographer (Gillian Anderson /X-Files) and humanitarian aid worker (David Arquette) attempt to rescue her and other young women against all odds.

Dying to Know, narrated by Robert Redford, about two conventional Harvard professors – Timothy Leary and Richard Alpert (aka Ram Dass) – who began probing the edges of consciousness in the 1960s, one ending up in jail and the other becoming a notable spiritual teacher.

The world premiere of Plant Pure Nation, from the writer/director and producer of Forks Over Knives . Featuring nutritional scientist T. Colin Campbell (author of the New York Times bestseller The China Study), the film tells the story of one of the most important health breakthroughs of all time.

The world premiere of four films including On Meditation 2, a fascinating portrait series offering a rare glimpse into how meditation has transformed the personal and professional lives of notable figures such as hip hop mogul Russell Simmons, author Sharon Salzberg, and spiritual author, teacher and expert Gabrielle Bernstein.

A special Sneak Peek of clips from The Connected Universe, featuring the “new Einstein” Nassim Haramein. This groundbreaking marriage of science and spirituality directed by Malcom Carter is now the highest grossing documentary in Indiegogo history.

Love Thy Nature Narrated by Liam Neeson, is a cinematic immersion into the beauty and intimacy of our relationship with the natural world. The film reveals how a relationship with nature ignites a sense of meaning and wonder so profound that it touches us at the very core of what it means to be human. Followed by a hike in the Red Rock Mountains of Sedona.

This year’s Illuminate Film Festival also will feature more than 50 expert facilitators, practitioners, healers, performers, artists, musicians, speakers and new thought leaders; a series of “View and Do” events that encourage audiences to more deeply integrate a movie’s message into their lives; The Conscious Film Convergence workshops and panels focusing on developing and facilitating distribution of this exciting and growing niche in independent cinema; and the Conscious Film Summit, a discussion to imagine new business models and brainstorm new strategies for collaboration to increase the quality, quantity and availability of conscious cinema worldwide.

For more information, and to purchase tickets, visit www.illuminatefilmfestival.com.