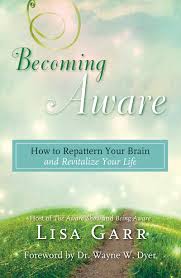 The following excerpt has been reprinted with permission from Becoming Aware: How to Repattern Your Brain and Revitalize Your Life by Lisa Garr (Hay House; May 19, 2015).

THE CHAMPIONSHIP RACE was certainly picturesque… I was focused in on my goal of taking the title. It didn’t matter to me that when the race started at eight in the morning, it was already a searing 95 degrees…

Hours later, the win was in my reach. The race was three laps, and in the previous two, I’d always passed the first-place girl on the descent… On the third lap, I spotted her right before the descent began, and I knew I’d pass her on the downhill and get to the finish line first. That was the last thing I remember.

All of a sudden, I woke up at the bottom of the hill with pine needles stuffed into my jersey. My helmet was sideways on my head and cracked in several places (although I didn’t know that at the time). I wanted to climb back up the hill, but the pine needles were so thick that I kept slipping.

Another cyclist saw me struggling to get up the hill, stopped, and said, “Are you okay?”

Later, he told me that I was trying to get back on my bike and just kept falling back down the hill. All I remember was pedaling… Eventually, doctors would tell me that memory loss is retroactive, and this is why I don’t remember the actual fall or trying to scramble back up the hill…

What happened next was the most important thing to ever happen to me. Somehow my body finally dropped to the ground, and I started to float above the entire scene. I was hovering over my body, which was down below me. I could see people surrounding me, but I couldn’t really tell what they were doing. Instead, I could tell what they were feeling. Some of them were feeling like they were on-purpose in their lives and put here to be emergency medical technicians… I could feel their thoughts, their desires, their unmet needs, but I couldn’t hear their voices, as there was no need to do so.

The place I was in was magical. It was vast and pure, with a type of expanded consciousness that I had never experienced before in my life. It was beyond words… I once looked out over the cliff at the great Grand Canyon, and this feeling was even vaster than that experience. When I ask myself why now, I know the answer. This was a place of complete, unconditional love.

There are no conditions of any kind in this state of pure expansion. There are no boundaries; no pain; and no past, present, or future. It is all of those things at once: the past, present, and the future occurring at the same exact time. It is actually a state of all-encompassing awareness rather than a “place.” It just is.

I can’t report that I saw a white light, nor did I travel down a tunnel according to the classic depiction of a near-death experience… All I felt was vast consciousness, and anything that came into my awareness was instantly manifested in front of me. I thought of Asia, for example, and Asia was in front of me… Even the most remote place I could imagine appeared in my limitless sphere of consciousness.

I was definitely not creating this in my mind, as I was the furthest from analytical thinking I had ever been. I was purely experiencing this peaceful state. I felt so serene and wanted for nothing. There were no unmet needs, hopes, or goals. There were no desires, as everything was present at that moment.

What I would find so interesting when I would look back on it was the absence of pain in that state. What I know now is that all discomfort is created in the mind. I had no feeling of pain after my accident—in fact, I couldn’t feel my body at all… We are pure expanded consciousness.

Back at the mountain, one of the EMTs was asking, “Are you Jon?”
“Yes,” a familiar voice said.
“She has been saying your name. She has been asking for you.”

I saw this silver cord, luminescent, pure, and bright, attached between Jon and me. It was like a light beam connecting us. I saw the connection, and knew that it was something quite significant. At that moment, I jumped back into my body, which felt very confined and small. I looked up, and my eyes met Jon’s… Even though I couldn’t form any words, I marveled that I could communicate in a new way. I spoke from my eyes to his eyes. And it was one of the most powerful and complete communications I had ever experienced. It only lasted seconds, and then I left again, returning to this beautiful place of expanded consciousness.

Lisa Garr is host and producer of a popular syndicated radio show called The Aware Show, heard in the Los Angeles market on KPFK 90.7 FM or on KPFK.org and she has a Hay House Radio show called Being Aware. Lisa also hosts a series for Gaiam TV called Gaiam Inspirations. Her bi monthly Summit series is one of the largest on the Internet. And topping it off, she is a weekend host on Coast to Coast AM, syndicated in over 500 stations around the world. Combined, she reaches millions of listeners globally a month. On The Aware Show, she interviews influential and incredible transformational luminaries from all walks of life. Her new book Becoming Aware (Hay House) helps readers transform their lives by showing how she applied 15 years of these experts’ lessons to her own life as a businesswoman, wife, and mother. Go to: www.becomingawarebook.com