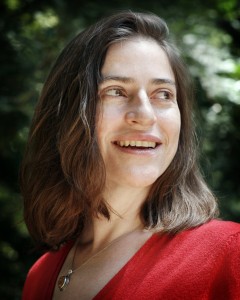 Everyone wants more love in their life, but what does it take to generate that love? How do you become a truly loving person?

Loving others can be hard, especially in intimacy and in family. When I was child, my mother pointed to the Church for the answers, but the Jesus I learned about offered no clues, only an injunction: be good. Easy for him: he was born perfect and free of any sin. That did not help me.

Like many people, I tend to learn by example. I believe something is possible when I see, or hear of, someone else doing it, someone I can identify with in some way. “If they can do it, so can I.”

Back in the 6th century, Pope Gregory understood this. That’s why he made up the story of Mary Magdalene as a prostitute. You see, the whole story of Jesus, as conveyed in the four Gospels, failed to include a single example of a sinner meeting Jesus, being healed, and then staying around and leading a healed life. Now, the Bible also tells us that Mary Magdalene was a powerful individual, especially compared to most women in Antiquity. Free of her person and thoughts, not dependent on any man, she chose to walk with Jesus, and support him and the disciples with her own money. She stayed to the bitter end of Jesus’ crucifixion, and all four Gospels agree: she was the first witness to Jesus’ resurrection. In other words, she was a very important person. Not easy for an every-day person to relate to.

So Pope Gregory added a prequel to Mary’s story: she was a sinner, a prostitute, who had come to be blessed by Jesus and stayed around to become this special person. As a prostitute held the lowest status in society at the time, her redemption was an invitation to all to come, and be welcomed and redeemed. You could not be worse than her. You had a chance.

But today that story has lost its power, in large part because we no longer understand the power of Mary’s role as Witness to the Resurrection. In the 6th century, Mary Magdalene was revered and adored across Europe. Today, she is just another sinner, mingling with tax-collectors and thieves, whom Jesus welcomed to his table.

Well, I still needed my role model. The challenge then for me, in writing Magdala, was to come to understand both Jesus and Mary Magdalene as becoming the extraordinary people who revolutionized the world. From inner life to geo-politics, nothing has been the same since they walked the earth.

In studying the actual physical world in which they lived, I was amazed to discover the ordinariness of horrific brutality in everyday life. The Roman Empire controlled Israel with its powerful army, which answered to no one. The local Roman governor, Pontius Pilate, would just as soon meet with his constituents as have them slaughtered on the steps of his palace while they waited to be seen. Local farmers sometimes had to trade on their children’s lives when they could not afford the crushing taxes. And without a man to speak for her, a woman was subject to rape, enslavement, or – worse?! – banishment, which meant starvation and death. (This is the context, by the way, of Jesus’ injunction against divorce. In today’s language it means: don’t throw your wife to the wolves.)

And yet somehow, in this fractured, violent world, Jesus and Mary created a language of peace and love that has endured for millennia. Somehow, in this tribal, strictly segregated society, they built an enduring legacy of inclusion and community. Somehow, in the midst of hunger and poverty and guerrilla warfare, they sparked a fire of hope and courage and faith that yet burns.
It took seven years for me to imagine how that happened. The result is Magdala. May it speak to your peace-seeking heart, as it inspired mine in writing it.

*******Magdala is available as a paperback or in digital format through Amazon, Barnes & Noble and via www.magdalathebook.com.