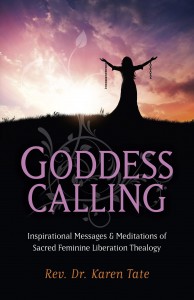 In ever-increasing numbers women and men are seeking spirituality beyond traditional religious institutions and more and more their new normal includes the deities, ideals and archetypes of the Sacred Feminine. They have a desire to get beyond the patriarchal dogma that often perpetuates sexism, homophobia and the domination of Gaia and all her inhabitants, including the body of Mother Earth. Women in particular are hearing and heeding their calling, stepping forth to take on their mantle of leadership as rabbis, ministers, priestesses, Nuns on the Bus and Womanpriests. They are exercising their spiritual authority in circles at their kitchen tables, in their living rooms and classrooms, in brick and mortar churches and temples, in political arenas and groves. They are flexing their spiritual wings and allowing themselves to be guided by their intuition, innate female wisdom and inner-knowing and they encourage their congregations to know and feel the essence of Goddess and understand what that new knowledge might mean for themselves personally and the world.

Often their shared message is one of female empowerment, social justice and environmental responsibility sometimes referred to as eco-feminist spirituality. The liturgy may contain social, cultural and political messages of liberation thealogy using Goddess mythology, archetypes and metaphors as benchmarks and templates for a more just and sustainable future. Gone altogether or tempered is the message of the strict authoritarian Father whose mythology gives license for a male-dominated society with women in a subordinate role. Nothing less than peace, partnership, justice, equality and care for the planet are at the heart of this Sacred Feminine wisdom.

In answer to this collective call to restore and re-write our values and find a new spiritual path women and men are blazing a trail using their pink handled machetes to find their way. It might manifest in progressive churches using gender neutral names for God in prayer and song. Others include liturgy embracing the Divine Mother in equal partnership alongside the Father. Altars might not be dominated only by male images. Still others give themselves permission to conduct women-only services and exhibit only female images of deity at their gatherings. Congregants worship together in circles rather than in hierarchal configurations with a male intermediary between them and deity. In fact, these groups and gatherings might be leaderless, egalitarian or organizers might share leadership. In case it’s not obvious, there is no one way and no absolute right way to facilitate these gatherings or to worship or interpret deity. These are just some of the new guidelines being tried across the globe as spiritual people come forward to see what works for themselves or their communities.

Yes, there has been a plethora of academic writings restoring knowledge of Goddess and women’s history that has been swept beneath the rug. Some, myself included, have used this knowledge to occasionally re-construct or adapt ancient rituals for a modern context. We have gleaned inspiration from inscriptions and ancient knowledge and turned it into the seasonal ritual. Psychologists have explored the significance of Goddess archetypes. Theologians have examined why Goddess disappeared and patriarchy began to dominate. Some statistics show that when all earth-based or goddess-oriented groups are combined, Pagan, or non-Abrahamic religions is one of the fastest growing groups in the country and books have come out in equal measure to support that growing interest.

What has been missing, however, is an abundance of inspirational writings that pulls all of these aforementioned areas of focus together between two covers and puts it into an easy-to-understand and user-friendly book of sacred feminine liberation thealogy. Yes, thealogy, not theology. The meaning of Goddess, as deity, archetype and ideal and her relationship to humanity, the planet and its species. Going beyond the wheel of the year, examining Goddess mythology and ideals of the Sacred Feminine that would reshape values, society and culture, from cradle to grave, and in pre-school to the voting booth. Goddess ideals actually do provide a template for a more just and sustainable future and with this book, I hope I’ve managed to directly connect the dots between the Great She and liberation from the oppression of our patriarchal world.

I wrote Goddess Calling, Inspirational Messages & Meditations to Sacred Feminine Liberation Thealogy to give individuals or those desiring to serve their communities a springboard to offer what I remember were called “sermons from the pulpit” in my early days as a Catholic, with ideas to create a format for a regular gathering or service. Easy to digest and sometimes gently following the seasons of the year and holidays already on most people’s calendars, these messages and meditations use Goddess archetypes, ideals and mythology to provide content for education, inspiration and contemplation for anyone seeking to incorporate a feminine face of god within their spirituality, no matter their faith – and the messages and meditations have been field-tested!

Following in one of the messages within this book, Trust in the Journey, these collective words of inspiration and guidance accumulated over time as I was called on as an ordained minister to speak about the Sacred Feminine. Yes, these messages and meditations have already been successfully shared and embraced by congregations where I have been invited to present papers, guest minister or lead salons or services for conferences, festivals, Goddess temples, Unitarian Universalist congregations, the American Academy of Religion or at Sacred Sundays, the latter being inter-faith services offered in the Los Angeles community for several years. Those experiences have provided the framework for this book and the suggestions herein for readers to find personal inspiration or ready-made material to facilitate your community circles.

As you go forward and find your sacred roar,

May Goddess Embrace You in Her Golden Wings,