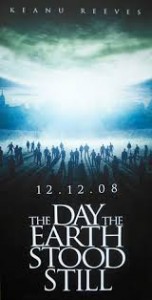 This post is a guest article written by Ken Myers.

Spirituality can have many different meanings for many different people. For some, it is the sensation they feel while attending church on Sundays. For others, it is any experience that can move them in a deep and profound way. While the movie, “The Day the Earth Stood Still” is seen more as a science fiction thriller, for some it has a far deeper meaning as it portrays the suspicious nature of humanity and how it would deal with such feelings.

Basic Plot – In this movie, an alien life form is taken by the government under the suspicion of having nefarious plans for humanity. It isn’t until it’s threatened that it unleashes catastrophic events that wreak havoc on a large scale. While this is a great work of the special effects teams in Hollywood, it begs the question, “could it really happen?” For many people across the globe, the answer would be “yes.”

Meaning to Everything – Humans are inherently afraid of what they don’t understand. In a vain attempt to understand the nature of something experienced, humankind has often linked fabricated stories and guesses as to why certain things exist. For instance, many cultures assumed that the stars in the night sky were “gods” watching over them. In fact, these twinkling lights are nothing more than fiery infernos of superheated hydrogen continuously burning its supply of fuel. We now call them stars. On top of that, many of these twinkling lights in the sky are actually galaxies and nebulae light years away.

Honorable or Fearful? – For some people, “The Day the Earth Stood Still” is an all too altruistic view of how the government believes it can contain any problem. It is an example of our foolishness to assume that humans are the epitome of existence. The overwhelming need for control and power can alter the mindset of many who would otherwise ignore such desires. Being able to control an extrasolar life form would be the ultimate step in creating an alliance that could heavily change the political powers on the planet. Instead of treating the creature like a neighbor who just moved in next door, humanity would treat it as a prisoner until we learned all of its secrets.

Existence or Annihilation? – It’s a sad realization when you consider how much truth is developed in this story. If an interstellar being had the technology to travel to our little planet, are we naive to think that our weapons would provide adequate protection? The being would unveil weapons we’ve never conceived of in order to defend itself – much like in this movie. Although it did have a happy ending when the violence was halted by the alien life form, would such a being be inclined to allow us to exist after assaulting and attempting to torture the creature? When humanity is attacked by a virus, don’t we eradicate it in order to propagate the species?

Some were moved by the plot of “The Day the Earth Stood Still.” It was a way of making us look through the mirror to see humanity for its destructive potential. Only by demonstrating the truth behind intentions can we learn to respect all life and not just those that conform to our specific beliefs. Only through trust and understanding can the bloodshed be stopped in order to allow humanity to evolve into the altruistic people it wants to be.

Ken Myers is a father, husband, and entrepreneur. He has combined his passion for helping families find in-home care with his experience to build a business. Learn more about him by visiting @KenneyMyers on Twitter.