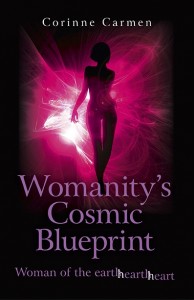 I will begin this article with a comment made by my 80 year old mother:
“After I read your book I cried for I realized that I do not really know who you are.”

Womanitys’ Cosmic Blueprint is not a book about me per say. It is a book about the core identity of every female on the planet. It attempts to lead each woman to a deeper door within herself that she can open to reveal her TRUE essence. This doorway to the real self is to many unnoticed, a hidden mystery, for women remain primarily focused upon the superficial life.

What my mother was really sad about was the realization that she had lived her entire lifetime unaware of her deeper identity, one that all women share. This is the collective feminine consciousness and this common thread makes all females identical in spirit yet unique in their individual potential.

We grace the Earth plane for but a short time and life gives us a brief moment to FULLY express ourselves to the world. To partially know oneself is to be incomplete and hence limit that full potential from manifesting.

The first esoteric wisdom written above the entrance of many ancient Eastern and Middle Eastern temples is “KNOW THYSELF”. Otherwise put, know who you really are from the core of your being right up to your superficial personality.

My aim is to point the reader towards her inner door by introducing her to a higher truth, the Universal Law of Duality that helps govern all workings in the Cosmos. Some call it the Law of Balance of two differing energies that create a pair.

This law, one of many that the Cosmos is built upon, represents itself on the planet in many forms including its manifestation as the male and the female. Divine couples are major symbols throughout mythology and ancient, hidden wisdoms passed down through the centuries. The entwinement of the Feminine and Masculine consciousness is the union of separate and differing energies often referred to as “The Sacred Marriage” when in the state of balance of mutual co-existence.

Dual energies are intended to work together to support one another. Their properties are opposite but not opposing. These two halves work in EQUALITY to enhance and stabilize the whole they are responsible for. In the case of the female and the male that whole is called humanity.

The outcome of the interplay of the specific energies of a duality is dependent upon unimpeded co-operation of these two halves working in balance. The highest mandate is to apply this law to states of destructive chaos (imbalance and instability) and transform it into creative harmony (balance and stability). This then allows a particular whole to thrive and evolve. This is a basic formula that helps stabilize and expand the Universe for “So above it must also be below”.

Bringing this home to humanity, the male being the polarity to the female, must through higher order learn to embrace its counterpart, working alongside her as his respected equal.

Social, religious and cultural brainwashing has led us to a precarious imbalance as a result of male dominance repressing the Feminine. This threatening situation has kept us in an ongoing holding pattern of suffering, pain, fear, disease, pollution and violence.

The gist of Womanitys’ Cosmic Blueprint is to bring awareness to women that this law alone proves woman’s equality in the greater scheme of things and she must now rally in force to rectify this imbalance brought about by the destructive mindset of the male ego need for superiority. There is simply no such thing as states of inferiority or superiority. It is a manmade illusion.

Dualities in co-operation abound around us and serve as examples. Just look at the balanced state of positive (male) charge and negative (female) charge from the North and South Poles right down to the tiny atom stabilized by its negative electrons and positive protons. Look also at the sun’s electrical force (masculine) working alongside the moon’s magnetic force (feminine). In unison they are responsible for creating movement, fertilization and growth in nature.

In Charts A and B of this book, the differing male and female core properties are listed that are important in the development of humankind. Neither chart is superior nor inferior, just opposite from one another. Both men and women must now work together, as per our innate programming, to introduce the long awaited Golden Age of harmonious co-existence. If attitudes of inferiority and superiority prevail, the current state of chaos or Age of Ignorance will continue to imprison the human spirit and severely retard our evolution.