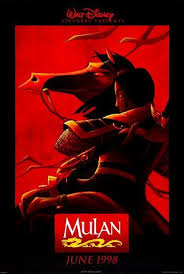 Although it might be a cartoon, this 1998 Disney film is also an inspiration to many. The film centers on a young Chinese girl who is trying to find out who she really is. Although society tells her to become a wife and be quiet and demure, her personality does not go along with that idea. However for the love of her family she tries to be a ‘good woman’ and fails.

Now feeling ashamed and unable to fit in, Mulan does not know where to go. However when the army comes to reenlist her wounded father, because he has no sons, she bravely takes a step that no one could anticipate. She dresses as a boy and goes in her father’s place.

The action filled tale of her adventures as a man in the army, her eventual uncovering and disgrace and then her magnificent achievement as both a woman and a warrior makes this film very inspirational. It shows that a woman can be equal to and even surpass men in many ways and should be respected as a person rather than seen as just a gender. The other soldiers, her friends as Ping, her male alter ego, eventually come to respect and help her to save the Emperor and gain the respect of the whole kingdom.

Not only is this film notable for the journey of self-discovery that Mulan goes through but the male characters also have their eyes opened to what true beauty and womanhood is about.

Additionally, there is the presence of her ancestors, the ghosts that send a tiny dragon to help her on her journey. Acting as both her conscience and the driving force behind her journey towards respect, the dragon helps her to connect with her past and embrace her future.

Altogether Mulan is a wonderful story of female empowerment, finding yourself, and becoming the person that you were meant to be.

Ken Myers is the founder of  http://www.longhornleads.com/ & has learned over the years the importance of focusing on what the customer is looking for and literally serving it to them. He doesn’t try to create a need, instead he tries to satisfy the existing demand for information on products and services.