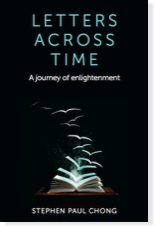 This post is an excerpt from Letters Across Time, written by Stephen Chong.

The old grand master was lying in his bed, almost near death. He struggled for breath and his every movement seemed to take an effort that led him further towards his end. There was much lamenting, for gathered around him were the many acolytes and monks that had been in his service for several years. Their tears flowed freely while lamentations and chants resounded clearly from the main assembly area and numerous other halls within the abbey; all came from those who did not have access to the grand master’s chambers.

Of a sudden and completely without warning, the grand master raised his head from the pillow. It was as if some magical essence had filled his ailing body with such strength that he could master that feat.

‘Go and fetch me the young novice, Michael,’ was his tremulous command.

‘But grand master,’ said his principal assistant, ‘he is but a first-year novice. He has been with the abbey only a few weeks. You are surrounded here by your monks and initiates.’

‘Do as I say,’ was the stern command. ‘Quickly! Make haste, there is not much time.’

So a messenger was dispatched to retrieve the young novice from his dormitory.

Some minutes later, and somewhat out of breath, the young novice was ushered into the chamber in which the grand master lay. He was no more than ten years old and still had not undergone any of the rigorous training in the austerities that define the life of a monk.

‘Come, come to me young minion. I must speak with you. Come over here by my side.’

The novice took tentative steps towards the ailing master and knelt by his bedside in awe of his power and wisdom.

‘Raise yourself, young man. I have not the strength to bend down to look at you.’

Then the master held out his frail hand for the novice to take.

The novice did so, but the quizzical look upon his countenance was enough to assure the assembled acolytes that this situation was completely without plan or design.

Then, in wavering voice, the grand master said, ‘Young novice, what is the meaning of life?’

At these words the novice looked aghast at the grand master, then said, ‘But master this surely is a question for your monks, not a novice like myself.’

‘Well master,’ said the novice, ‘I am a child of God. It is by His grace that I have this life, but it was my choice that I chose this life. I chose this body and this life so I could best realize my true self.’

‘And, young novice, what of your life so far, how has it been?’

‘Master, my life so far has not been without trial. I have experienced some pain, but I have also experienced much happiness.’

‘And for what reason do you think that you have had these painful and pleasurable experiences?’

‘Well master, I guess it is because through these experiences I can realize my pathway to God.’

‘Thank you, thank you, young man,’ said the grand master softly to the novice, ‘you will make a great master one day.’

Then, he addressed all who were assembled to hear his words.

‘Listen well to the words of this young novice, for these are the words of innocence, untainted by a longing for redemption. He knows not the fear of death, yet he speaks the words that define our life. Harken to his words I say, and let none here deny their veracity. For truly, it is the young and the innocent who hold the key to the most profound questions about the meaning of life.’

At these words the grand master closed his eyes, and —with the most beautiful expression on his face – passed on to the next realm.

An excerpt from Letters Across Time: A journey of enlightenment

Stephen Chong M.Ed. is a highly sought after personal development coach, keynote speaker and author. Over the past 25 years he has provided guidance and motivation to countless people through his inspirational messages and ability to bring the best out in people. Stephen’s wise observations of modern work and personal life will give you insight how to realise your highest potential through a rich and fulfilling life.