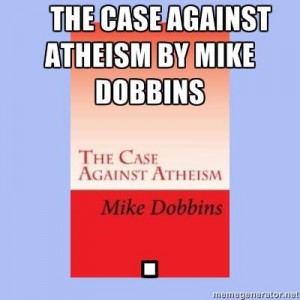 Excerpt from The Case Against Atheism

Should a supernatural event take place, material science, according to its doctrine, would fruitlessly strive to explain the event by natural, material means. It may state that it doesn’t know, but it will not concede that a supernatural event occurred. The entire premise of material science is that all explanations are material, even those claiming to be immaterial. As Smithsonian Institution paleobiologist Douglas Erwin so poignantly stated “One of the rules of science is, no miracles allowed.”

Accordingly, scientists would have reacted swiftly and vehemently to the claim that Jesus Christ was resurrected. If scientists had thrived at the time of Christ they would have immediately started making material hypothesis as to how Jesus rose from the dead: he was in a coma, he consumed something to make his heart beat slow and make it look like he was dead, they revived him and hid him for three days, etc.

Atheists lose their credibility as skeptics when they *skip* the evidence part and instead simply draw a conclusion based on the alternative explanation. Not only is this not scientific, it is perverting the true meaning of skepticism. To the outside observer, it appears as if atheists only use skepticism as a way to *rationalize* *away* something that is difficult to fit into their worldview. Perverted skepticism is a tool used to maintain their faith and not have to entertain or accept ideas that challenge their beliefs. Atheists are giving skepticism a bad name and making atheists look desperate.

Even the founder of The Skeptic Society, atheist (though he doesn’t always label himself such) Michael Shermer confessed as much when he wrote “I am occasionally accused of being skeptical of the wrong things, or being too skeptical for my own good. Sometimes I’m even charged with denialism – I don’t want X to be true, therefore, I unfairly find reasons to reject X. That is undoubtedly sometimes the case.”

Instead of a confirmation bias, which atheists regularly accuse of scientists who show evidence for the supernatural, the atheist has an *anti-confirmation* bias. They are biased towards not accepting evidence that a supernatural claim may be valid. They are in *denial* that the belief system they’ve adopted could be wrong.

It’s one thing to call yourself a skeptic, it is another to apply skepticism properly, rationally, and scientifically. It’s one thing to call yourself a free-thinker, it’s another to actually be one. Yet, atheists continually assert skepticism in the face of evidence that contradicts their belief, often without evidence of their own. Those who dismiss serious evidence pertaining to questions of significant consequence with inventions that have no evidence are treating you like a child, and don’t warrant a seat at the adult table.

This post is an excerpt from : The Case Against Atheism By Mike Dobbins