What is it that I hear in the hush of the night, through the owl’s cry, far beyond the roar of the aeroplane overhead, the traffic on the distant road? What is it speaking to me, calling to me?

What is it that I feel beneath my feet when they touch the dew of the grass in the early morning that meets my flesh with cool caress, and awakens remembrance of music, fragrance and rite long ago – when all things, as all movement were known to be one?

Who is it looking towards me through your eyes when words cease between us and an ancient yet timeless communication begins again, that takes up the thread of truth again where we left off, or forgot, or were sundered long ago? Whence the origin of this silent speech – and what is it saying?
Clare Cameron 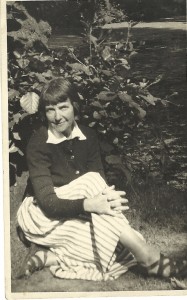 These were the words of poignant invocation that opened an anthology by Clare Cameron, the sensitive, mystical poet, whose reflections form the substance of the book , Hidden Beauty of the Commonplace. They moved me deeply when I first read them many years ago and they touch my heart with their lyrical gentleness still – just as they always did. The anthology is long out-of-print, but I know more about it than anyone else, because as a young man I had conceived and compiled it out of an ardent admiration for Clare’s work.

The book, published in 1980, was entitled Mystic of Nature and it is an inspiring collection of essays by a remarkable writer, who was at the peak of her creative powers during the colourful but challenging decades of the 1960s and 1970s. Just as now, that time was a period of great social and political upheaval – a kind of crucible of change when our contemporary world with its high expectations and dangerous pace was beginning to take shape.

We are living in especially critical times yet again and nobody is immune from the challenging impacts of sweeping change in an era being rendered increasingly bleak and uncertain by austerity and danger. It is this fact that gives the present study of Clare’s life and spiritual teachings such immediacy and special relevance now – and invests it with enduring value. Because what the world needs above all in its continual travail is not judgement or condemnation but genuine compassion and understanding.

It is only words of conviction flowing from authentic wisdom that have real power of transformation – the capacity to clarify confusion and ease the great suffering to be seen all about us. And the writings of this sensitive and unassuming nature poet have this radiant quality in overflowing abundance.

Of a deeply mystical temperament, Clare may be regarded as having had in addition the gift of prophetic vision. No stranger to periods of instability and warfare during her long life, she foresaw with remarkable acuity in her later years the present era of great unrest, which has culminated in such a dangerous clash of cultures between East and West as we are currently experiencing.

Firstly there was the brutal Islamic jihad leading up to the merciless and unprecedented attack on the New York Trade Centre; then came the long drawn-out wars of attrition in Iraq and Afghanistan, followed by the turbulent Arab Spring of 2011, which has released the pent-up fury of aggression mixed with hope of freedom. Clare Cameron had clearly foreseen these grim events long before they came to pass. As far as she was concerned, the writing for humanity was plainly on the wall in all manner of respects, and she issued a series of sober warnings in the spiritual magazine she edited, together with sound advice about how best to cope in the difficult days and years ahead. It is certainly bad news, but strangely one does not feel totally discouraged because of Clare’s resolute and uplifting tone. Her words instil great hope and awaken a strong determination for one to help as best one can. It is a rousing call to arms – but not of the usual sort, for patience and non-violence are always the chosen ways forward for warriors of peace.

Using dramatic imagery, Clare Cameron writes of the battlefield and the armour of light as well as the day of reckoning as she refers to the strong tide of catastrophic events such as we are witnessing in our own era:

It is coming in with increasing rapidity, sweeping away all the debris on our shores, all our former concepts, ideas, beliefs, attachments and, if only we can understand the promise it holds, the habits perhaps of a lifetime.

We are being cleansed and purified as never before, that we may be more worthy channels for what lies ahead for us in service to others. And those of us who have the knowledge will be needed to help others understand when the waters go over their heads in days to come. We shall reach out hands to those who could so easily drown under the waves of fear, anxiety, depression, despair. Even we ourselves at the present time can sink into inertia, indifference and a feeling of helplessness – or ride the waves with courage and hope.

For there is no doubt that just as the whole world is changing, now that the old order of things is breaking down to release the beginnings of the new, so we ourselves are changing. We are obliged to recognise it.

There is no more security in any aspect of life, no more security in the familiar and comfortable – either physically, mentally, emotionally or in the kind of spirituality that has served us in the past. Under this tide of higher vibrations and cosmic energies, the ground is going under our feet. There are new shores ahead, but only this tide can carry us to them.
Clare Cameron

I never ceased to be amazed how Clare calmly made sense of the most troubling of world events in this incisive and matter-of-fact way. I sought glad refuge in the warmth of her unruffled serenity, for she was like the loving grandmother I never had – and she has been a cherished spiritual teacher for me too. When I compiled her anthology all those years ago on behalf of the publisher for whom I then worked, my life had already become deeply entwined with hers. But I did not realise then how potent and far-reaching her influence upon me would prove to be.