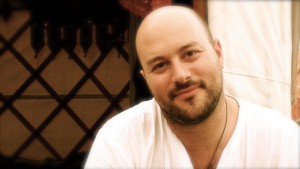 The following post is an excerpt from Mark Abadi’s book Evolve: Living in Balance and Self Acceptance through Science, Spirituality, Mindfulness and Nutrition. For more information about the book, please visit his web site at: http://www.markabadi.com/evolve/.

Yes, that old bucket of fish! We’re all designed to desire to form romantic bonds with others, mainly as a way of creating security and sharing skill sets for optimal survival. Through this ‘safety in numbers’ principle, or tribe mentality, we’re best able to procreate and advance the species. There are other more spiritually important reasons for a romantic joining, which we’re going to explore. The mechanism that drives us together is the Universal desire to be in balance. It’s actually a law of physics to constantly desire neutrality. It’s the same law that makes the wind blow. Wind moves from one place to another because there is more pressure (i.e. air) in one location than another. Continuously seeking balance it moves around the Earth and this is the basis of weather. This is also the blending of opposites, the uniting of the feminine and the masculine, the yin and the yang, the extrovert and the introvert, the ida and pingala.

At the most fundamental level, creation of life is the ultimate goal of romantic relationships. This occurs when two opposites join, to become one. Getting preggers is the same Universal process that governs the movement of everything, from the stars to the wind and the ocean. Of course there has to be an attraction between two people. This attraction will be on a physical, psychological and energetic level. The physical level will depend upon your experiences, the culture you grew up in and in many cases how your parents looked. The psychological attraction will be on how much you feel their interests and skills support yours. How their culture and economic background can gel with yours.

The energetic is slightly different. At this level edges and thus definition lose their meaning and the vibrations are more like a symphony of sounds. A guitar might well sound good with a piano, but if one’s playing rock and the other’s playing classical, they might clash. Deciphering the ideal percentage ratios between all of these three is as boring a question as the nature nurture one. Who cares? The point is you, uniquely will have your own ratio set up and so long as you are being true to it and following your instincts you’ll find what attracts you.

Recently, I was flirting with a pretty girl and her sister called me shallow. I said “You have to go through the shallow to get to the deep!”, which I thought was very witty and now I think it’s clever and brilliant – oh Leos and their ego! We were talking about opposites and laws of attraction. So what about like attracting like? Currently you can’t make life with two identical sexes bonding. This doesn’t mean there’s no point to gay relationships, on the contrary. There is much to be learned in every sort of relationship and anything you can do, is natural, as you, my dear, are part of nature. In reality there are somethings you can get from a same sex partner that you’re less likely to acquire from an opposite sex partner. For example such a relationship might yield a deeper understanding of your gender specific perspective. Remember I said it’s only a current fact that you can’t produce life without the blending relationship of two opposites sexes.

This fact, as many have in the past, can change as science advances. As creating children is a fundamental reason for romantic relationships, the inability to do so removes one of the corner stones of a successful relationship. I mean it’s hard enough to find someone you can stand let alone spend your life with. Now take from that a core, base, animal attractor and you have less than you started with. So if you don’t have the support of your base animal instinct, that hard relationship just got harder. This will also be the case for opposite sex partners who can’t have kids, although there will be somewhere a sense inside them that they are still fulfilling the base requirements. That being said, in today’s climate we have expanded the function of a romantic relationship away from procreation alone.

Relationships these days emerge as emotionally supportive and intellectually stimulating companionships. This topic and the potentially awkward interpretation by an emotionally sensitive reader, reminds me of a funny tale about males and females courtesy of a hilarious comedian Daniel Tosh. He’s talking about how ridiculous it is that people suggest God hates gays. He tells a story to illustrate why it’s not the case. So there we are chilling in the Garden of Eden and the girl goes and eats the forbidden fruit. I mean come on girls, do you have to eat everything? I know you were hungry and there was a snake talking to you, stick to that story, it’s worked this far. So anyway she gets caught, classic mistake! Then all humanity is punished for all time. What’s women’s punishment? Menstrual cycles and painful childbirth, men’s punishment, having to put up with women! The point is, it’s not that God hates gays, he’s just pissed that they found a loop hole in the system!

The same key I shared with you before is even more relevant here – be true to yourself. If there’s anything you’re holding back, especially from yourself, then it’ll come round to express itself at some point in time.

What’s more it won’t be a convenient time of your choosing either. Believe me, it’s far better to get it out of the way, face your demons and be done with them. That ‘be done with them’ saying is also misleading, as it’s suggesting that they’ll be gone, history, nada. As you’re getting by now, the key is to allow them to be present in your life without causing you an issue. So it’s not about eradicating them from the face of your world, but relocating them, in a place, within you. Here they can feel comfortable enough to cause you no more trouble.

Remember, just like the loud guy in the bar, once he feels accepted he no longer has to shout. Your exterior appearance to the outside world, although it might seem important at the time, is unimportant and has nothing to do with your happiness. You might appear to be happy, but true happiness seems to be positively correlated with your degree of sincerity. In other words, happiness comes from being truthful with yourself and others. Even if you feel miserable, be happy about it because it’s not about the flavour of the ice cream but the temperature that makes it ice cream!