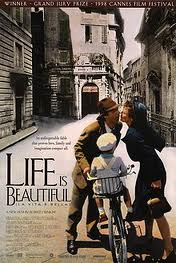 This article is a guest post written by Aniya Wells.

La Vita è Bella is a 1997 Italian film written by Roberto Benigni. Since its release, the movie has won 3 Academy Awards and has been dubbed as one of the most inspirational movies of all time. It is set in the early years of World War II and follows the life of Guido (played by Roberto Benigni) who is a Jewish Italian. I first watched the film while in college as part of advanced Italian language class.

The first half of the film is a heartwarming romantic comedy. Guido is a man of modest means, but his imagination transforms the most common elements of daily life into magical moments. It is Guido’s whimsical and courageous personality that wins the heart of his love-interest Dora and ultimately saves the life of his young son Giosuè.

On Giosuè’s fourth birthday, Nazi’s interrupt the party and take them to a train station. After the family arrives at the concentration camp, Guido and Giosuè are separated from Dora. To keep his young son from succumbing to fear, Guido convinces Giosuè that the concentration camp is actually a game. During this time, Guido exemplifies wit, humor and courage in the midst of suffering and offers light in the darkest of circumstances.

Guido is special because he also understands that reality can be altered with a shift in perception.

During the first half of the movie, it is easier to understand how Guido can view life as a grand and bountiful experience. He is a dreamer who works as a waiter and, later, as a book seller. His life is full of love and rich with imaginative playfulness.

It is only when Guido is imprisoned that we understand the true strength of his imagination and the love that fuels it. As a father, Guido leaves his son with one very important lesson – life is beautiful.  Throughout his role as a father, Guido is committed not only to protecting his son’s life, but also his spirit.

The circumstances, Guido teaches all of us, are irrelevant. External factors are, simply, backdrops to our lives. Our imaginations build our worlds. In turn, our imaginations are fueled and supported by the things we value and people we love.

When I reflect on the film Life is Beautiful, my imagination settles on Benigni himself. As a writer and actor, I think the story of Guido inspires each individual’s real and immediate ability to become both the writer and the star of his or her own life.

My subsequent thoughts center on Guido’s unshakable perseverance. To the very last scene, Guido is fully committed to his role as a father. His talents and values undergo enormous strain, and eventually he is defined in the single teaching he left behind for his son.

This article is a guest post written by Aniya Wells.  Aniya Wells particularly loves reading and writing about online education, although her interests span different niches as well, including personal finance, parenting, sustainable living, and more. Accredited online degree programs are hard to find in the online morass of scams, so Aniya’s ultimate goal is to help her readers figure out the maze of online education. She can be reached for questions or comments at aniyawells@gmail.com