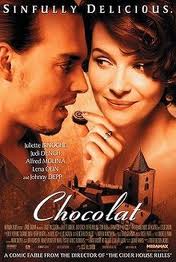 My candidate for a great inspirational movie is one that centers on the tricky business of selling chocolate. The movie is Chocolat, a charming and breezy 2000 film directed by Lasse Hallstrom (who also directed great films like The Cider House Rules and What’s Eating Gilbert Grape) and starring an amazing cast of actors including Juliette Binoche, Judie Dench, Alfred Molina, and Johnny Depp. Like the novel by Joanne Harris, the movie is set in a close-knit and deeply religious village community in 1950’s France, and it serves as an excellent tale about accepting change and the learning to embrace the differences in one another. And of course, the movie has lots and lots of scenes that focus on making chocolate.
The plot in brief

The movie focuses on Juliette Binoche’s character, Vianne, a traveling chocolatier who moves from place to place with her daughter Anouk, selling their wares wherever they go. The director gives their arrival an almost mystical quality as they descend upon the small French village that is the setting of the film. Vianne and Anouk settle in an old shopping space owned by Judie Dench’s character, Armande, an no-nonsense woman whose perpetual crabbiness becomes endearing as the movie progresses. In this newly rented space Vianne decides to set up her chocolaterie (chocolate shop).

The problem is that the small town is a fairly conservative one, where everyone goes to the local church and gossips about the trials and tribulations of all its residents. Vianne unwittingly arrives in the village in the beginning of Lent, a time when everyone is forsaking indulgences in the spirit of Jesus’s sacrifice. Naturally, many of the residents show outright resistance to the opening of a chocolaterie during such a penitent season, including the mayor of the city, the Comte Paul de Reynaud, played by Alfred Molina, who spends the majority of the film trying to thwart Vianne’s efforts at every turn.

Vianne’s arrival serves as the catalyst for many events in the village, but she doesn’t let it bother her. Instead, she reaches out to other outcasts in the village who like herself have been shunned by the populace. This includes Josephine, a woman in an abusive marriage who seeks refuge from her husband in the chocolaterie, Armande’s quirky grandson with a penchant for dark poetry, and Johnny Depp’s character, a river gypsy named Roux. As Vianne’s popularity grows, the mayor of the city steps up efforts to vilify her in various ways, going as far as intimidating the newly ordained village priest into writing sermons that target her specifically.

Of course things come to a head, and I won’t exactly spoil the details for you because the movie is definitely worth watching, but suffice it to say that significant conflict occurs between Vianne and her detractors, and that all of them, even Vianne, learn something about their preconceptions.

Like I said before, the movie’s theme is one of acceptance and forgiveness. It’s no coincidence that the movie is set in the Lenten season, a time of serious reflection and penitence in the Christian faith. Chocolat is all about the different ways that people confront change in their lives. For the mayor, the change comes in the form of his village which is moving away from the traditions and old ways of the previous decades. His unwillingness to meet that change is personified in his doomed relationship with his never shown wife who’s always mentioned as being “on vacation,” though everyone understands that’s she’s left the mayor. Vianne has to deal with her familiar role as an outcast, but she must also face that fact that her transitory lifestyle isn’t suitable for her daughter Anouk who wants some consistency in her life. The river gypsy Roux must face the prejudice against his lifestyle, whereby people universally view him as untrustworthy and criminal.

There are other major and minor characters in the film that confront similar changes in their lives, and they all meet them in their own way. The movie teaches us that we shouldn’t be closing ourselves off from others because of their differences. Instead, we should be opening our doors to other exactly because they live differently than we do; it’s about understanding that everyone has something to bring to the table that’s worthwhile, whether it’s the traveling chocolatier or the old-fashioned mayor.

About the Author:
This guest contribution was submitted by Samantha Gray. Questions and comments can be sent to: samanthagray024@gmail.com.