Below is a copy of a Q&A with Jeremy James, author of the transformational novel, The Alchemical Horseman.

Where did the inspiration for The Alchemical Horseman come from?

Firstly, the inspiration to write The Alchemical Horseman came from a mix of working with horses and abstract philosophy. It came from believing in something: if you hold a value and that value is true, if you believe and work for it, one fine day you’ll be proven right. What it doesn’t come from is self-delusion: to want something because you feel like it, because you think you can force it. Same with horses: if you work with them as though you and they were part of the same thing, you leap ahead. If you work in absence of that, by treating them like objects and are not fully engaged with them, presuming you are the boss and they the slave in some miserable duality, you’ll never get far. The Alchemical Horseman is about unity.

Secondly, the whole story came to me in a dream – about ten years ago. I’d already been writing it for at least ten years before that, had written and rewritten it – then one night I had this extraordinary dream about a subject of which I knew little: alchemy. That dream put me squarely on the path to write The Alchemical Horseman.

If there’s any kernel behind the origins of the book it is the study of the alchemic path – the Great Work as it was called – and horses, whom, personally, I think, hold the code of the universe. They know strange things.

What are the major themes in the novel?

I suppose ultimately the novel is about finding out about oneself, coming to terms with ourselves and learning what we are as opposed to who we are. That is to say we need to learn and fully understand of what we are made: of what we are capable. If we trust life, really trust it, then all will be revealed and we shall find ourselves on the right track. It’s only by failing to listen to our inner voice, ignoring our instinct that we go off the rails. Even when pitted against appalling odds, if we let go and rely on ourselves, we will make it. It’s when we fail to do that, fail to trust life – that we come to grief.

The natural world obviously has a central role in the story. How important is it to you?

I hold with Edgar’s comment in King Lear when he says: ‘Thou Nature art my goddess, to thy laws are my services bound.” To me, the expression of everything lies in the natural world: it’s at our feet, above, beneath and around us all the time, how can we ignore or expect it not to be important? It is not only important, it is vital. What is astonishing about it is that it is fully concentrated, everywhere, all the time, there’s not a corner of anywhere that doesn’t have some spark of life or natural power or natural authority in it. What does that sound like to you? It’s gentle, it’s beautiful, it’s tiny, it’s vast, it’s complex, it’s simple, it’s awesome, it’s cherishable – it’s everything.

How far do you think the problems that exist in Xavier’s world affect us?

Xavier Perdue is the doubting, hesitant hero of the book. He makes a lot of mistakes, repeating the same ones again and again. Although the book is set on both the future and the past, what I have attempted to bring into focus are those things which either are oppressing us, will oppress us or have been oppressing us and are likely to do so again. In the story Xavier is a pretty anarchic figure yet he is for the best of reasons: he sees government as irresponsible and incompetent: he finds himself swept along in a head-in-the-sand society obeying absurd rules that benefit a tiny few at the expense of the many – all this is happening today.

When did you first become interested in alchemy and tarot?

I bought a Tarot pack when I was twenty-five years old knowing nothing of it. At first I thought it a dangerous thing until I realised it was allegorical and the danger lay in my mind, not in the cards. I left the pack alone for a while, then picked it up and did a reading on myself. What rang out clearly from that reading was that my life lay in my own hands. I could make of it what I would. It was up to me. For some reason that made a lot of sense, as do things when you comprehend them for the first time even if you’ve been told them countlessly before. I saw then the value of the Tarot and how it could be used to constructive purpose.

Over time, I saw how it was related to alchemy and alchemy to it, that both The Tarot and alchemy are about the same thing: searching for and finding the right path.

How does The Tarot relate to the 22 chapters in the book?

The Major Arcana of The Tarot is made up of 21 cards, leaving the first, the Fool/Zero. Tarot is similarly structured: set-up, conflict and resolution in three sets of seven, and seven is a recurrent number throughout the story as the heroine, Epsibar Sophia says: “Seven for the seven planets and seven their spheres. Seven for the ages of man and seventy seven, his years. Seven for the steps of the soul and seven for the days of the week: splendour, knowledge, love, beauty, justice, wisdom, immortality. Seven colours set the rainbow; seven notes dance to the scale. The septenary constitution of man: material, vital, etheric, animal, rational, spiritual, divine. Which and where are you?”

On a more basic level, The Tarot describes a man’s journey through life beginning with his setting off without any knowledge of the pitfalls that lie ahead. Gradually he learns and by the time he reaches the end, he gathers the whole world, the last card in the pack – hence The Tarot becoming a divinatory tool, whereas it is, in fact, a far more alchemic device. If read properly, it can help us to comprehend ourselves.

What do you hope people will take away with them after reading this book? 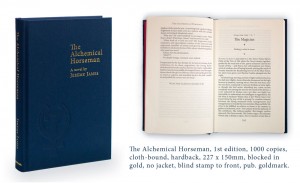 Tricky question: as a writer you write for yourself not for anyone else – if you’re being honest with yourself that is. After all, who is your reader? Do you know them? Him? Her? It’s only by writing for oneself that one can be honest because by trying to judge someone else’s reaction to some event or to some subject, one is not being honest, one is guessing or making an assumption and that can’t be helpful. Certainly it won’t have much depth. What I was trying to answer for myself in the story was how to deal with values in an inverted world, where neither politicians, bankers, lawyers nor media moguls have shown themselves to be paragons of virtue, in fact, they have revealed themselves to be more corrupt or incompetent than we thought imaginable; where the most sensible things are swept aside in favour of the most foolish, when appeals for wisdom are replaced by folly, where enormous companies trade evil for good and we’re all supposed to take it lying down.

On another level, it’s the story of a quest: a redemption. It’s for anyone who has ever struggled with addictions and with phobias or hang-ups, with alcohol addiction, or with drug addiction – I have had to come to terms with painful stuff myself – this book is for people like me. I don’t mean that in a soul-searching, toe-curling way, I mean it as a truth: there are ways of getting yourself out of a hole and one of them lies in this book.

If there’s anything I would like The Alchemical Horseman to do, it is to entertain: anything over that is a bonus.