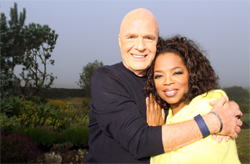 Wayne also speaks candidly about his battle with leukemia and his decision to seek controversial treatment. Dyer says his illness is gone due to a long distance surgery he had with a healer known as John of God. While Dyer was in Maui, the controversial surgery was performed thousands of miles away in Brazil.