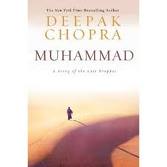 In “Muhammad: A Story of the Last Prophet,” author Deepak Chopra captures the spellbinding life story of Muhammad through a compelling novel.

According to the introduction,

“Higher consciousness is universal. It is held out as the ultimate goal of life on earth. Without guides who reached higher consciousness, the world would be bereft of its greatest visionaries — fatally bereft, in fact. Muhammad sensed this aching gap in the world around him. He remade the world by going inward. That’s the kind of achievement only available on the spiritual path. In the light of what the Prophet achieved, he raises my hope that all of us who lead everyday lives can be touched by the divine.”

In a culture bombarded with a media that often only covers extremist viewpoints of Islam, it is refreshing to see a novel written about Muhammad that writes about Islam and Muhammad from a fair perspective. Written as a novel that is rooted in historical detail, Deepak Chopra’s book brings the Prophet to life through the eyes of those around him.

“Muhammad: A Story of the Last Prophet” is available on Amazon if you click here