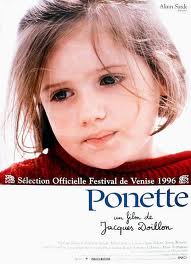 This article is a Guest Post written by Barbara Richardson, author of Guest House.

What is Your Favorite Spiritual Movie?

I’m going out on a ledge here. When asked  “What is your favorite spiritual movie?” I have to admit a gaping chasm opened, and hence the ledge in front of me. Moviemakers don’t often grapple with how their films can suggest the profoundly wonderful.

So I gave myself time. And while my own inquiring mind circled back, I asked friends the same question. What is your favorite spiritual movie? The first person said without any hesitation, “Midnight Cowboy.” Which makes me want to see this film again! A friend of hers said, “The Big Lebowski.” Goodness, people are interesting.

I read lists of spiritual movies online, to see if that would inspire. The obvious titles don’t stir me. So the next question became, “What is spiritual?” I believe the answer is another question: “What moves you beyond yourself?”

In this spirit, a few movies have come to mind. “Enchanted April,” in which four soggy disillusioned British women choose love. In Italy. And I don’t mean escapist love. They take their dreary lives and infuse new life into them. They make what they have bloom. (I am strongly influenced in this by Elizabeth von Arnim’s great novel Enchanted April. Some call it fluff, but I would ask them to take their dreary lives and embrace them into beauty.)

“Wit,” a one-woman show starring Emma Thompson, requires no distractions and allows for none. The entire movie takes place in a hospital room. An academic is dying of ovarian cancer, accompanied mainly by her own clear memories of her life and all its distances. An unflinching overview of a life, given final “simplicity and kindness.” This film will move you beyond your everyday self.

But I am choosing “Ponette,” a quiet French film featuring a four-year-old girl coming to grips with the death of her mother. Transcendent in the most grounded way. You will see life through Ponette’s eyes.

What movies do you value as spiritual pole stars? What leads you beyond yourself? What lifts you out of worldly constraints awhile? Let us know, and we’ll tune in!