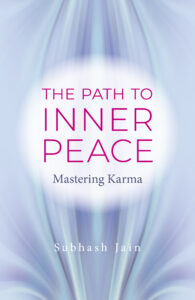 According to universally accepted wisdom, good actions give rise to the desirable consequences and evil actions result in undesirable consequences. That is the karmic law or theory of Karma. Different religions provide different explanations and the Jain teachings have produced many complex treatises on the subject. Unlike some other theories, Jains are taught that the producer of Karma alone bears its fruits, and no worldly or heavenly power can alter the outcome of that Karma. It does not recognize any external forces outside the realm of a person’s Karma that can punish or forgive. In other words, it does not assign a creator God any role in determining the fates of individuals.

However, the individual does have the power to eliminate or soften the blow of some of the Karmas by steps described in the scriptures. Even after accepting these general statements, we are often confused by the application of these karmic laws in our daily life.

Dr. Subhash Jain, a Professor Emeritus in the departments of Civil and Environmental Engineering at the University of Iowa, has attempted to explain Karma theory in this book. To simplify complex metaphors, he has employed a fictional account of the relationship between a Guru and his American student, Jason in a question-and-answer format. The locale is YellowStone National Park and just the two of them conversing in a quiet setting.

Simple? Not really. After all, the subject – “KARMA” is not for the faint of hearts. The Guru is patient and benevolent. The student is sharp, intelligent, and full of reverence for the Guru.  His gasping powers will astonish the readers, but they will at times, feel left behind. One is forced to go back often and reread the previous line, previous paragraph, or the previous page. Here is the plot.

Jason had just graduated from high school, and before joining college, spending his summer vacation camping alone. In solitude, he is seeking answers to why one is often preached to do good things. In the previous year, he read a book on Karma given to him by one of his best friends – Ajay Jain. Jason finds the book intriguing. He has learned that it is one of the main tenets of Jainism. Jason is on a journey to find his own path for spiritual transformation, and he feels that the Karma doctrine is the missing piece on that path. But he has many questions.

Jason believes the actions of a living being make that living being unique. But what may be the reason that everybody’s actions are different from others?  He has learned that for the Karma doctrine to be meaningful, the presupposition of rebirth is indispensable. That makes him wonder if the soul of a living being can liberate itself from the cycle of birth and death. Why are some people born healthy while others ill, some intelligent while others are mentally challenged, some compassionate while others are cruel, and so on? Why do terrible things happen to good people? He believes there must be a logical explanation for the suffering in the world. He would spend the summer seeking answers to his queries. Ajay had given him the phone number of a Guru that could answer his queries and lived not too far from where he was. So, Jason connects with the Guru.

Guru undertakes to answer all of Jason’s questions and more. They agree to meet five days a week for a couple of hours in the afternoon. He inquires of Jason if he will have time to learn, do research, and still enjoy his stay at Yellowstone. Satisfied by his answer the Guru begins.

The Guru starts with a question – what are the substances which living beings are made of as he introduces the concepts of six fundamental substances starting with “matter” and its properties. From that modest beginning, the Guru takes him to the constituents of living beings, consciousness, properties of matter and soul, and causality, and brings him to ponder on Actions and Consequences leading to the conclusion that the Karma doctrine must be a universal doctrine. But the consequences can be universal or environmental (time, place, or local regulations).

This is where the first rule of Karma is revealed:  Only the universal consequences are governed by the Karma doctrine. Wealth, poverty, prestige, and disgrace are environmental consequences that aren’t governed by the Karma doctrine. The next phase of conversation gets into Karmic body, transmigration of the soul, dark matter, subtle matter and moha (impurity of the soul).

Interestingly, for a book on Karma doctrine, the author begins a chapter on Karma only halfway through the book.  He discusses the applicability of laws of Karma, types of Karma, Karmic particles, and Karmic debt, etc. After that, there are topics of the Karmic field, Mastering the Karma and a primer on life forms based on the number of senses. The last three chapters are on Free will, Health, Wealth, and Happiness, and Steps towards Spiritual Growth.

On the last day of discourse, Guru reminds Jason that each of us has the potential to achieve everlasting inner peace by liquidating our karmic debt with our own effort.  Always remember the golden rule that spiritual growth is achieved by conducting nonviolent actions that reduce karmic debt. Spiritual growth leads to the destruction of ego, the change in our attitude toward life and outlook toward worldly objects, and the realization that the soul is the location of inner peace.

The book ends on an emotional tone. Time for the student to depart.  He has learned a lot and it is time to internalize the knowledge and internalize it in his daily actions. Happy endings but a blissful beginning.

Path to Inner Peace: Mastering Karma presents the fundamental principles of the Jain karma doctrine through a fictional account of the relationship between a guru and his American student. As the story unfolds, the guru instructs the student on how ‘karmic debt’ is incurred as the result of personal action and how this ‘debt’ can be reduced through behavioral choices.

Path to Inner Peace: Mastering Karma by Subhash Jain is available from www.mantra-books.com and wherever books are sold.