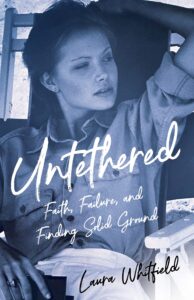 The night my parents got the news that my oldest brother, Lawrence, had fallen to his death while climbing Ben Nevis in Scotland, I had an epiphany: Life is short. You have to take risks—make every moment count. I was just fourteen at the time. Little did I know those words would change the trajectory of my life.

Later that year, I became a Christian and found hope and a path forward. I was on fire for Jesus and was never even tempted to stray, at least not until I moved to the beach the summer after my freshman year of college. That’s when my risk-taking began: Losing my virginity to a handsome DJ. Dropping out of college, twice. Moving to New York City to become a cover girl.

People kept telling me I was brave to go to New York. Was it bravery? Or just bravado? I certainly don’t think it had much to do with my faith. I still believed in Jesus, but following Him was a different story. I just wanted to do faith my way.

After New York, and still in my twenties, I took other risks. Marrying quickly. Leaving that marriage to return to college and complete my degree. There were other impulsive decisions after that, many which have had a lasting impact.

Even after sifting through difficult memories while writing my memoir, Untethered, I’m not sure how much those risks increased my faith, except when I fell flat on my face, which I did over and over again. That’s when I would long to return to “something that wouldn’t come undone at my own bidding.” I knew that “something” was my relationship with Christ and that finding that Solid Ground was my only hope. I was like the prodigal in Luke 15, tired of following my own path. It took me awhile, but I finally gave up, returned home, and fell into the arms of my loving Father.

Since that time I’ve taken more risks. Teaching kindergarten for fifteen years without a teaching degree (I’d majored in Economics). Retiring from teaching to write full time. And daring to love again. With each new experience, I’ve gained wisdom. As I reflect on my life to date, I know God has been with me, equipping me to meet every challenge.

This spring I will publish my debut memoir, the culmination of a lifelong dream. And yet, of all the risks I’ve taken, this is one of the most difficult and profound. As I wrote, my coming-of-age memoir began to evolve into the story of my journey back to faith. I stumbled upon dark, painful memories that I had a hard time facing. As I began to remember, I fell into shame. How could I possibly face my past, much less share it with the world?

I will never forget the day I was walking our dog down the path that runs by the lake behind our house. My book was going to the printer and I realized that it would soon be released for everyone to see. The shame of my past decisions—and many of the risks I’d taken—began to cave in on me. My heart felt heavy; I was afraid.

That’s when I clearly heard God say: “If you walk around with your head down, what does that say about Me? Lift your head and walk into the world with your head high. You are not your past. You are beloved and forgiven. That’s who you are.” I took a deep breath, lifted my head, and made the short walk home.

In the days that followed, I practiced holding my head up. Whenever I’d feel shame creeping in, I’d recall that encounter. Several weeks passed, and one day I said to my husband, “I don’t know how to explain it, but I feel lighter. It’s like I’m walking around in a different body.” That’s when I knew I’d been released from my shame.

My father, a lifelong journalist and newspaper editor, kept a plaque on his desk that read, “You shall know the truth and the truth shall set you free.” By writing my memoir, I’d taken the greatest risk of all: telling my truth. I was finally free.