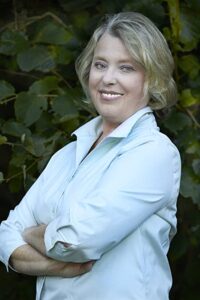 Anyone from the Northern Hemisphere who travels to the Southern and looks up at the stars at night has probably had this disconcerting feeling: the constellations seem to be turned on their heads. This is what happens to two Americans in An Upside-Down Sky as they are stargazing in a field in Namyan, a fictional south Asian country modeled after Burma/Myanmar. The title, then, is literal. It is also metaphorical. The sense of incongruity grows as the two travel along with sixteen other Americans and a Namyanese guide. They struggle with the contradictions of a deeply devout Buddhist country that is also enmeshed in long-term ethnic cleansing and a recent brutal military dictatorship.

2. What is your book about and why did you write it?

I am, for better or worse, a novelist who works without an outline. I love what Michael Ondaatje, author of The English Patient, says about the writing process. For him it is inspired by “a little keyhole of an image.” My keyhole image for Sky came when I had the opportunity to visit Burma in 2015. Early on, the tour group I was with visited the de rigueur Shwedagon Pagoda in the capital, Yangon. It happened to be the day that a purported relic of the Buddha, brought from India, made its debut and there were lines stretching out of sight of Burmese of all ages waiting under a broiling sun – cheerfully snacking, playing, dozing – to see it. This image if the humble, docile crowd over which loomed the massive golden complex of pagodas and stupas, waiting to see a toe bone, stayed with me. And then, once inside the complex, another image proved irresistible. In corners and crevices of the massive compound there were curious little altars topped with  offerings of fruit and flowers, and many of them decorated with gender-fluid figures. What, I wondered, did these have to do with Buddhism?  Well, nothing, as it turned out. These were called nats, hardy animist deities from a belief system predating – and surviving alongside – Buddhism. A perfect setting, I thought, for a varied lot of American tourists.  As a one-time travel journalist, I’d been on a lot of trips and collected an eclectic assortment of characters. I wanted to write an ensemble piece, pitting those with the world-as-a-theme-park mentality against others who wanted to understand (to one degree or another) a culture (or cultures) outside their own experience.  And finally, to explore, through a main character, the messiness of accepting and letting go of grief and the possibility of renewal.

I do tend to take on serious topics in my books, like addiction, cancer, depression – and in Sky, grief and violence. Adding humor in a serious narrative is like a pressure valve that releases the tension, making space for the unexpected, the absurd, the irreverent. And not least, reconnects with the reader. If we know why humor works, nobody seems to be able to say how it does. Try deconstructing a joke or a funny incident. Not many laughs there. Yet everyone recognizes and needs humor.

4. What drew you to write this story?

I mentioned the personal impact of visiting Burma and wanting to explore its contradictory images as a writer in a novel. There was the irresistible thread, too, of putting a lot of characters who don’t know each other in the pressure cooker of a trip where much can go wrong (and does), as well as the peculiar stress of enforced intimacy while in a strange country. And again, I wanted to explore the challenges of grieving. The protagonist, Lidia, presents as a blocked Latina artist who has, it seems, lost her husband. She’s floundering. And she’ll have choices to make that could help redirect her energy and balance.

5. In the book, you write about the political conflicts of a fictional country in Asia while also incorporating Buddhist traditions. What are your thoughts on the current conflict between Russia and how could someone use principles of Buddhism to respond to serious conflict?

There’s a scene in the novel where the Americans visit a Buddhist nunnery. In this disparate group of 18, there are a couple of Buddhists, several progressive and fundamentalist Christians, two Jews, one Moslem, and the rest are unaffiliated with any organized belief system. They gather in the meditation hall for a discussion with the nuns, during which one of the American women gets a call:  her beloved only grandchild has been hospitalized in the States after an accident, in an induced coma. Panicked, the woman interrupts the discussion to ask the nuns how God can permit such suffering to a child who has Down syndrome. The response by the nuns to the grandmother of the gravely injured child is swift and succinct: “Life is suffering. Tend to her.”

Burma, with its 54 million people, and Ukraine, with 44 million, are both enmeshed in extreme violence, where ordinary people’s lives and livelihoods are in constant danger. For Ukraine, for Burma, the world, the Buddhist virtue of “not to injure” is paramount. Jesus said, “Pray for those who abuse you.” And the nuns in the monastery say “Life is suffering. Tend to her.” When I wrote this scene, of course, the fictional Burma had not been slammed with a reinstitution of the vicious dictatorship that had ravaged the country for half a century. There had been ten years of new, fragile democracy. All that is gone now, but the people refuse to accept it. Just as the people of Ukraine refuse to accept another round of Russian oppression. For those who follow the tenet of “Do no harm,”

the Buddhist nun’s advice in Sky is ever apt.

6. What did you learn about yourself as you wrote the book?

I’ve been writing for a long time and in one way, my work is a kind of archeology of my strengths and weaknesses. For example, I know I am in trouble when I am taking myself – or anything – too seriously. In Sky, I connected more easily with the characters and the narrative when I let go and lightened up. That showed me I’ve made some progress over the years. 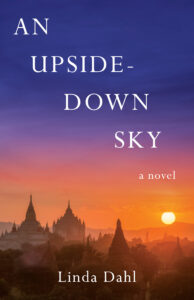 An Upside-Down Sky had been copyedited, proofread and put to bed at the printer’s when the news broke of the violent reimposition of the military dictatorship in Burma. The fragile democracy had endured just ten years. Now it was crushed. And now as I write, Ukraine, with its own long history of oppression, has been violently invaded by Russia. Jesus, in the Sermon on the Mount, spoke of “turning the other cheek” – that  justice does not call for retribution. Buddhism accords no place for the use of violence as a means of diffusing conflict and indulging in violence is viewed as self-harming.

For those who try to live by principles of fairness and peace, whatever their spiritual or religious or moral beliefs, giving aid to the needy is a first precept. In the midst of the great violence in Ukraine as in Burma and in so many other parts of the world, including America, there’s the temptation to fall into cynicism, despair or vengefulness.

Linda Dahl began her career as a travel journalist and college teacher before turning to writing full time. An award-winning author, she has written groundbreaking books about women in jazz and women’s needs in recovery from addiction, as well as five works of fiction. She is currently at work on a screenplay and a new novel. She has two children, a cat, and too many plants. She lives in Riverdale in New York City.