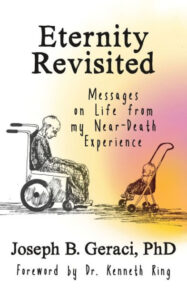 1. What is In _Eternity Revisited about and why did you write it?

Eternity Revisited (ER) is an account of my clinical death in 1977 and its effect on my life over the the past 45 plus years. It was written out of an obligation to share what I have learned and its meaning in an increasingly troubled planet.

2. Can you describe your NDE. What did you see, hear, and experience?

The most frustrating question I am most often asked is what was it like and can you describe it? My answer is always the same; I cannot describe it. It was a totally non-biological experience. There was nothing to hear, see or feel, there was no time or sequence of events. It was a state of awareness with total knowledge, peace and love. Everything was all at once. Some people have reported visions and communication with others. Some have recalled visions of fields and flowers; I did not. What I was left with was an awareness of certain things upon my recovery. Among them I had total knowledge, the importance of love and importance of a sense of humor. Accounts of the experience have been recorded numerous times over the years portrayed by lights and tunnels and has become pretty much common knowledge. Perhaps it is time to spend more of an effort on what the experience means and its implications for living lives of peace for the betterment of man and beyond.

For me the experience of peace and love was from being in a state of consciousness where that was all that existed. One may say it was the personification, for lack of a better term, of God. God in a sense that we have never known.

4. How can people who have not experienced an NDE cultivate that type of peace and love in their life?

It is not necessary for one to have an NDE to have love and peace in their lives. I know many people who are peaceful and loving without having the Experience. I believe that, despite media reports, there are far more loving people in this world than not. I also believe that love cultivates love, we can learn it from each other. Perhaps the reason some people have had NDEs is to help cultivate that love. The NDE is a phenomenon that occurs throughout the planet regardless of religion, or the absence of it, culture or ethnicity. Each NDE’r a Johnny Appleseed of peace and love. It would be nice if more of those seeds were planted in the barren media and entertainment industries.

5. What would you say to skeptics who dismiss NDE as some sort of change in the brain or delusional state of mind?

Skeptics are important to the NDE for they provide for a stimulating and healthy discussion on the phenomenon. It has been my experience that the skepticism has actually worked in favor of the NDE as evidenced by long accepted laws of physics coming into question and recent research into levels of consciousness. The deeper we probe into the universe(s) the more we are finding out that there is little that isn’t possible and that the NDE is not that far removed from our expanding knowledge.

I share my thoughts because I was asked. I never intend to influence or persuade anyone to my beliefs or way of thinking. My only hope is that it stimulates further discussion and research. If it helps anyone in a time of crisis be it personal or social, that would be a plus. If we do not question or challenge then we have learned nothing.