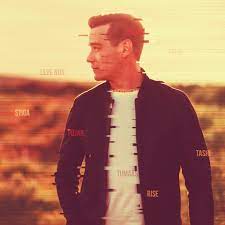 I wrote Trillion after having the realization of how important it is to celebrate life. I would see people celebrate touchdowns, home runs, and other victories in sports and watch them go crazy, jump around and lose their freaking minds. And the funniest part about it was, it was all vicarious! It had nothing to do with them. So I thought to myself, “why don’t we do the same for the biggest victory of all: Being alive? Being you?”

To me, Trillion is a reality check. When the statistical odds of being alive are 400 trillion to 1, that’s like getting struck by lightning 800 million times.

Life is simply a gift, ‘Trillion’ is about the importance of embracing this truth, as many things (especially during this time) can easily take this realization away.

(You can click here to listen to Trillion on Spotify).

2. Can you talk about healing frequencies in music.

I started composing music from Dr. David R. Hawkins’s scale of consciousness, which is a map made from 30 years of testing that discovered a correlation between a spectrum of values, attitudes, and emotions that correspond to a certain frequency. My first release’ Rise, for example, was written from the energetic frequency of ~200, which corresponds to the emotion of courage, the words “I can,” etc. I have also used Solfeggio frequencies, originating tones reputed to date back to ancient history before the sudden change to 440hz in the early 1940s.

3. You write about the value of positivity/spirituality. Can you share a time in your life when you struggled and how you were able to use positivity or spirituality to overcome that?

Within five years, my mother, father, and grandma all passed away. During this time, I had a spiritual encounter during a meditation in Florida with Tony Robbins. Even though it was during a chakra/gratitude meditation and had nothing to do with the encounter, at some point, I left my body and noticed a golden figure approaching me. Behind it was my family. Wrecked with tears, the figure walked closer and stood before me. The feeling was indescribable, so I’ll save you the long description, but I simply let go of everything.  Many would call it a “spiritual awakening,” but I simply realized that all my needs were already met, even at higher levels beyond my capacity to realize it fully. Later on, I quickly realized that this was Jesus, haha. I realized that all you truly need is God’s love.

4. You are also a career coach trained by Tony Robbins. Can you talk about that? What was your training like, and can you give some examples of how your work has helped other people?

I trained as a results coach and a strategic interventionist with Anthony Robbins for about four years. It was a lengthy process in which 30 out of 500 applicants were selected. At one point, I was flown into New York for a week to what I could imagine Navy Seal training to be like, haha. Tons of manufactured adversity to see how you navigate rough waters and how quickly you can develop effective solutions.

A lot of the work I did was simply how to condense what would normally take 20 years of counseling/therapy into 30-60 minute sessions. Many of my clients report what helped them most is breaking out of old beliefs, patterns, and identities that they have been stuck in. And from this shift, they healed from their past, started a business, or simply feel like their “best self.” This happens by actually going to the root of the issues and working with the subconscious, not just the conscious mind.

5. Some of your work is focused on giving and receiving support. How do you find that balance and learn to receive while also not taking or giving too much of yourself?

The first step is to make sure you are in a mindset of genuine service, and after setting proper giving boundaries and genuinely being in a state of service, how much you give and take balances out naturally. Let’s face it; many people give to get. One of the most effective ways to REALLY get to a heart space that wants to give is to re-wire your mind to Gratitude. Whether it’s meditation, visualization, or journal – apply a daily practice where you truly overflow your cup with what you ALREADY have and what is GREAT in your life. From this space, you naturally want to give and help others, and your intuition on when not to will be heightened. The springboard of your action is more important than the action itself. Are your actions from lack or trying to get? Or are they from abundance and wanting to give?

Once you lock in this mindset as your OPERATIONAL standard, you then set boundaries. These boundaries include who you give to, to what extent and period of time per day, per week, etc. These boundaries are just as important as generating giving energy because they prevent it from leaking out by directing it to the wrong situations and people.

6. Have you experienced any serendipity or synchronicity in your life or musical career. If so, when?

Absolutely. All throughout my life, music somehow was around me. When my parents separated when I was 4, they played the Leap of Faith album by Kenny Loggins, which I visualized I made myself. Then, a kid I ran into down the street of our new home after moving ended up being a musician and my childhood best friend. THEN my high school best friend was a producer, and we ended up road-tripping and going to the same music college together. The story’s continue on to today, it’s simply nuts!

7. What do you have coming up next?

My next track is set to release in a few months, which will be the most ‘spiritual’ release to date. I am incorporating a lot of new things that haven’t been done before that I am very excited to unveil.