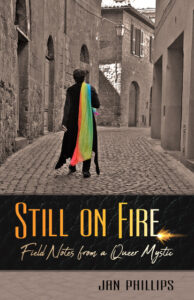 Excerpt from Still on Fire

The God that I once related to has gone the way of the wild goose, but the time I spend in prayer and meditation only increases. I redefine prayer every morning as I light my candle and open to the Divine, which feels to me like the air in my room and the air in my lungs—both inside and all around me. I imagine everything as energy or light vacillating between two forms: particle and wave. I am the particle version (visible, finite, mortal) and the Divine is the wave version (invisible, infinite, immortal).

My relationship with this force is conscious and all-consuming. I dedicate my life to it. It is my primary work—not an arduous task but a jubilant encounter. I am in a love affair with an invisible lover. Every morning I raise my being to the condition of oneness. I begrudge nothing. I wake up eager to light my candle and announce my presence. There is no heavy lifting.

God, to me, is a moving force, a verb, creation ever unfolding—the supreme force that I come from and belong to. I am the shape it takes, the form it melts into, the mirror it sees itself in. The ground of being— consciousness itself—pervades and saturates the universe. There is nowhere I can go to escape it. It is not inaccessible. It is unavoidable. Like the Hassidic saying: “He who does not see God everywhere does not see God anywhere.”

Every one of us creates our own relationship with the sacred, or not. It’s really nobody’s business how that connection gets created. Religion has tried to corner the market on all things spiritual, but from where I sit, there is nowhere to get to and nothing to seek. We are swimming in the sea of it. We are made of it. We are cells in the being of it. Nothing that exists is not it.

When the apostle Philip said to Jesus, “I do see you, but I want to see God,” Jesus replied: “Whoever has seen me has seen the Father,” according to traditional translations of John 14:9. Catholic philosopher and scholar Beatrice Bruteau in Radical Optimism suggests some other words Jesus might have used: “Whoever sees anything at all is looking into the eyes of the Only One Who Is.”

When Buddha said, “Make of yourself a light,” and Jesus said, “Let your light shine before others,” we can only imagine they were urging us toward complete self-expression. When we are most ourselves, we are most on fire, most alive, most enlightened. The Hindu mystic Ramana Maharshi said that self-realization “is the best help you can possibly render to others.” “Wake up, come alive, share your light,” is what the masters urge of us. We don’t grow our light by study. We grow our light by union with our Source, Light itself. It is not what we learn, but what we unlearn that is useful to us now. We need to give up our sense of separation from Source and others, give up our notion that there is a heavenly father out there taking care of us, let go of the notion that we are anything but creators, cocreating the destiny now of civilizations to come.

As we evolve ourselves, we see ourselves as agents of change, creators of our lives, our families, our communities and cultures. As we deepen our awareness, let go of limiting beliefs and inherited ideas that no longer serve us, we rise above the fear that has silenced us and shine our light for those in the dark.

What does it mean to be the light of the world? To radiate love, to act in peace, to speak for justice? It means to see beyond the opposites, to enter into unity, to find the sacred wherever we look. Everything we need is in the air we breathe. Everything we long for is in the love we give.

This is the time to come out of our solitude and accept that we are saturated with divinity and instruments of its grace. This is our time to shine for ourselves and each other all the days of our lives.

Jan Phillips is a thought leader who connects the dots between spiritual intelligence, evolutionary creativity, and social transformation. She is the author of eleven award-winning books, has taught in over 25 countries, and has published work in the New York Times, Ms., Newsday, People, Parade Magazine, Christian Science Monitor, New Age Journal, National Catholic Reporter, Sun Magazine, and Utne Reader. This is an excerpt from her new memoir, Still On Fire—Field Notes from a Queer Mystic, to be released by Unity Books in October 2021.

Jan teaches throughout the United States and Canada, facilitating retreats on evolutionary faith and prophetic action. Her quest has taken her into and out of a religious community, across the country on a Honda motorcycle, and around the world on a one woman peace pilgrimage. She has produced three CDs of original music, several videos, and a seven-hour audio program called Creating Every Day.