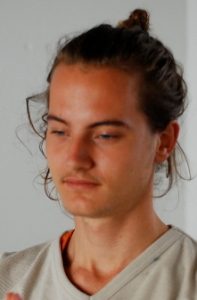 It is the path of the mystic to pursue humility, for in the shadow of namelessness one makes oneself equal to the sublime light of our divine and nameless origin. And yet I must now speak a little of my humble self, for in the light of the nameless shadow I have found a measure of spiritual wealth, and such wealth must not be kept for oneself alone, especially not in the face of a world that lives in a state of inner poverty. If out of humility a baker should deny that he has bread while the world starves, then his intentions are noble but his compassion is ineffective. Therefore those endowed with some mystical quality must at whiles speak with humble honesty about the path that lies behind them, so that the world can understand the spiritual service they feel they can offer.

At the age sixteen I had a kundalini awakening while I protected a defenseless young man from violence. Kundalini is a primal energy located at the base of the spine, when awoken it ascends up the spinal cord, nourishing a person’s evolutionary potential. As I came to offer protection to the would-be victim I had no intention to fight, yet now I myself had become the target of aggression. My opponent was obviously a trained fighter; his build was strong and his kicks and strikes were skillful. But this divine energy that now coursed through my being protected me from harm. I was kicked and I was struck, and even head-butted. But my opponent simply could not harm me. Suddenly I noticed I was able to clearly perceive the thoughts of my aggressor, not so much literally but I could clearly sense the quality of his thoughts, and also of the people who stood by and watched. The fight would end with my opponent’s confusion and having harmed himself by slamming his forehead against mine.

The kundalini energy had awoken some of my latent spiritual potential, for suddenly I was capable of mediumship. I entered into communion with higher realms and the spiritual beings who live there — my spirit guides. They told me in a wordless language that meditation is a developed facet of my soul, and that I should give in to it. As I would sit, they induced the knowledge of meditative breathing techniques upon me, and so I entered into the realm of meditation, and began my journey upon the path of the mystic

I started to naturally integrate the facets of my soul that were developed through the myriad spiritual paths that I have walked in previous lifetimes, such as Buddhism, the path of the Indian yogi, and paths that are now forgotten. However, one path has become the foundation of my soul, and is also that which I wish to share with others the foremost: the path of Taoism. Taoism is a form of ancient Chinese mysticism that pursues a harmonious unity with nature. The ancient Taoist path that I remember was about Taoists not only perceiving the Tao as the divine source of life, but especially as a passageway into nature. In order to understand this, we must see that the Tao is not only the source of life but naturally also the universal essence of all things. Because the Tao is the universal essence of all things, it has a bridging function between all things, as if it enables a neural network to exist between the myriad facets of life. Therefore those who learn to live in compliance with Tao learn to interface with reality, and so become wise and harmonious.

I also like to refer to this quality as transcendental empathy.

The meaning of empathy is that one is able to understand another person by being able to place oneself in his or her position. By living in compliance with Tao, one places oneself in the universal essence of all things, thereby attaining an empathic relationship with the truths of life, including the laws and principles of nature. This is where esoteric wisdom such as yoga, qi gong, inner alchemy, the internal martial arts and tantra come from. It is also through transcendental empathy that the ancient Taoists awoke to the true Self. We are in the state of the personal self when our identity is not founded upon a real-time attunement with the universal laws of nature, but rather upon personal ideas and convictions, and socio-cultural conditioning. When we do live in this state of real-time attunement with these universal laws is inevitably to attain an identity founded upon truth, and so the Taoist mystic entered into the true Self. I feel transcendental empathy also holds the key as how to go beyond the human suffering of intelligent ignorance. A human being with all his clever technologies is very intelligent and yet because he is divorced from existence (nature) as a whole, he is also very ignorant, and thereby causes ceaseless destruction to both himself and the world around him. Conducting science by the virtue of transcendental empathy will allow humanity to evolve into a technological civilization that destroys neither itself nor its environment.

In order to attain the transcendental Tao and allow it to function as a passageway into nature, we must understand and attain Stillness. A human being manifests himself though three qualities: mind, body and speech. All these three qualities give direction to energy. When mind, body and speech are under the control of the personal self, we misdirect our energy. Our energy can never resonate with anything truly meaningful — it can never resonate with Tao or natural law. By cultivating Stillness, the mind, body and speech are no-longer under the control of the personal self. Now it becomes possible to connect with Tao and natural law, entering into a transcendental communion with truth.

Here we must see yet another function of Stillness. When we enter into Stillness, the yin and yang forces of our chakras are naturally stabilized. When these two forces are stabilized, a perfect central point is created in the chakras that acts as a passageway into Tao so that one begins to touch upon its infinite power. This is in truth the principle of zero-point energy active within the human body. The principle of zero-point energy states that when the positive (yang) and negative (yin) forces are stabilized (in a state of equilibrium) within a vacuum, it becomes possible to draw great amounts of energy from higher dimensional sources. This is of course what is happening within the human chakra system. This vacuum is analogous to emptiness, which is just another word for Stillness. I remember from my Taoist lifetimes that we used this infinite power to generate an energy body that can rise beyond the limitations of the physical body and goes beyond the cycle of death and rebirth. This is why we called this body one’s immortal body, which is the Taoist term for nirvana. However, using Stillness to attain one’s immortal body through the infinite power of Tao is to me but of secondary importance, for I believe it is far more relevant for humanity to attain the Tao and its capacity of facilitating the virtue of transcendental empathy to go beyond the suffering of intelligent ignorance.