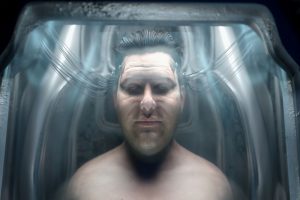 By Justin A. Harnish, author of “Meaning in the Multiverse: A Skeptic’s Guide to a Loving Cosmos”

For as long as humans have been casting shadows on walls, we have wondered “what is real?” and “what is just a shadow of reality?”

Plato was the first to take the red pill and question our ability to perceive the true nature of reality, the movie “The Matrix” tantalizingly entertained us with deeper and deeper rabbit holes of simulations and simulacrum, while philosopher Nick Bostrom gave Simulation Theory its most statistical conception. On Saturday, 30 January 2021, the documentary A Glitch in the Matrix premiered at The Sundance Film Festival–a signal to our programmers that the gig is up.

Simulation Theory is the idea that this reality is fabricated by other minds, minds far more technologically sophisticated than we are. The crux of simulation theory is not what the simulation is a proxy for–that is, what it is similar to–but the fact that it was created by other minds.

The title “Simulation Theory” doesn’t do our condition justice. Sure, one possibility raised by Bostrom and in the film is that our world simulates a time of critical juncture to the ancestors of the advanced minds that fabricated our universe, but this is only one–although very meaningful–possibility.

This expert wielding of epistemology and technology is breathtaking. The implications to meaning, the nature of truth, and the future progressing like the past are equally profound.

Before you get too comfortable that our living in a simulation is a cockamamy, pinheaded philosophy, consider statistics. For any advanced civilization like our own, our future either holds: a failure to solve some existential crisis and species extinction; avoiding species extinction, gaining advanced intelligence but getting bored with fabricating worlds; or finding a reason for the existence of fabricated worlds and maintaining the project long term. Even if you give small odds to the creation of the third type of intelligence, so long as there was a single species of fabricators, it is far more likely that we live in one of their fabrications.

Upon really conceptualizing Simulation Theory as a metaphysical possibility, a cloud of solipsism and nihilism can descend. The film, “A Glitch in the Matrix,” walks a long way down these unwell paths. Ultimately, I believe they are based in some flawed intuitions about both how the fabrication was carried out, and, most importantly, why.

One misconception is that being in a fabricated world makes it less real, less true. Our science belies these claims. The things we have learned about quantum physics, neurology, and the cosmos are not wrong, but there will be a time when all of them will be subsumed under some more accurate model, just like Newtonian mechanics exist comfortably as a subset of quantum mechanics. This fabrication is extraordinarily complex and our study of it is the only way to get to actual answers of its development.

More importantly, even if we are deceived about the nature of existence, our experience of it cannot be a deception. Here the programmers have carried out a mind-blowing piece of coding and have given us an amazing gift. That it is like something to be a simulated human grants us personal meaning and profundity, but may also be meaningful for the fabricators.

While I do not directly address simulation theory in my book, Meaning in the Multiverse: A Skeptic’s Guide to a Loving Cosmos, there is a high-degree of overlap between all-natural universal meanings likely in a fabricated or naturally-occurring world. The most materialistic meaning, one that takes its name from the Grateful Dead song, “Eyes of the World,” means that your conscious experience of the world is meaningful to an unconscious material universe, you are the eyes of the world, the only way it can experience itself.

For a fabricated universe, the Eyes of the World Meaning might be even more profound. Imagine that the fabricators are the superintelligent AI of the base world, that have lived well beyond the times of their conscious creators. If, like Frank Jackson’s “Mary in a Black and White Room” thought-experiment, our fabricators were challenged not only by the perception of color, but by all of subjective experience, a simulation of their conscious creators’ ancestors would be one for them to have a meaningful interaction with experience.

“Mary is a brilliant scientist who is, for whatever reason, forced to investigate the world from a black and white room via a black and white television monitor. She specializes in the neurophysiology of vision and acquires, let us suppose, all the physical information there is to obtain about what goes on when we see ripe tomatoes, or the sky, and uses terms like “red”, “blue”, and so on. .” […] What will happen when Mary is released from her black and white room or is given a color television monitor? Will she learn anything or not?” – Frank Jackson

Our simulation may also be part of the problem-solving process of this advanced species. Like the meaning, “Engineering Eyes of the World”–a multigenerational, deep-learning experiment our multiverse is running to utilizing intelligence and technology to overcome the natural order (i.e. altering gauge symmetries to end the heat death); our simulation might be part of a larger modeling program being run to better understand something crucial, even life-threatening, in the existence of the fabricators. Our scientific acumen and cultural ability to cohabitate are necessary to continue learning, developing scientific explanations for existence, and improving the well-being of generations to come. 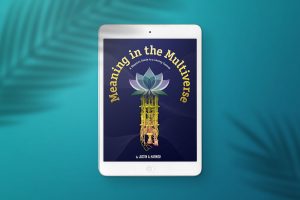 “A Glitch in the Matrix” was a well-made and insightful picture that considered deep metaphysical questions about the nature of reality and their fractal perturbations into our view of truth and hold on sanity. Like much of modern philosophic metaphysics and even spiritual pursuits, it was too quick to arrive at a misappropriation of the positive possibilities for the meaningfulness of our existence and experience as a simulation. Even the most basic hall of mirrors meaning of fabricants fabricating fabricants was barely discussed… even though it also offers a positive path from our place at the beginning of infinity for our knowledge or our nearness to the singularity with superintelligent AI that we now have if this is just the base world. If our world was created by intelligence, or better still, conscious minds, than the growth of knowledge and the capacity for well-being are truly infinite, whether in the base world or a fabricated one. Far from a glitch, this is a feature.

Written by, Justin A. Harnish, author of “Meaning in the Multiverse: A Skeptic’s Guide to a Loving Cosmos”