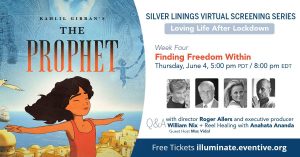 About the Film Kahlil Gibran’s The Prophet 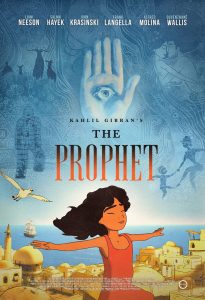 Called a “work of essential spiritual enlightenment” by Variety Magazine, the film is a stunning visual adaptation of The Prophet, one of the most popular volumes of poetry ever written and cherished guide to life, death, love and art. Chock full of wisdom, Gibran’s timeless verses have been given enchanting new form in this painterly cinematic adventure about freedom and the power of human choice and expression. The film intersperses Gibran’s poetry within stunning animated sequences by filmmakers Tomm Moore (The Secret of Kells, Song of the Sea), Nina Paley (Sita Sings the Blues), Bill Plympton (Guide Dog) and a host of award-winning animators from around the world. This groundbreaking use of animation for divine storytelling will excite both adults and children alike, lovers of the classic text, as well as novices to Gibran’s work.

The movie’s story centers around Mustafa, a beloved exiled poet (Liam Neeson) who is under house arrest in the foreign city of Orphalese.  In his Mediterranean seaside village, Kamila (Salma Hayek-Pinault) cleans house for Mustafa but the more difficult job is keeping her free-spirited young daughter, Almitra (Quvenzhané Wallis), out of trouble. The three embark on a journey meant to end with Mustafa’s return home—but first they must evade the authorities who fear the truth in his words will incite rebellion. As he imparts his gentle wisdom on a variety of topics related to a life well lived, audiences are carried on the 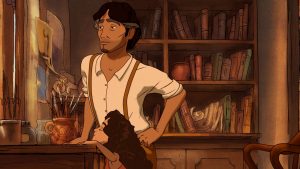 wings of his words, enriched by the timely and artistic expression of what it means to be vibrantly alive.

In May 2014, a work-in-progress version of The Prophet was screened at the prestigious Cannes Film Festival, after which it had its North American Premiere at Toronto International Film Festival and its Southwest Premiere at ILLUMINATE Film Festival in Sedona, where it earned rave reviews and the festival’s 2015 Director’s Choice Award.