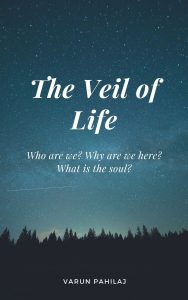 By Varun Pahilaj, author of The Veil of Life: Who are we? Why are we here? What is the soul?

Is the world the product of nothing more than a cosmic accident, a seemingly random event that occurred, beating the odds of a centillion to one?

Mark Twain was born on the day Halley’s comet appeared in 1835 and died coincidentally on the day it reappeared in 1910, maybe some things just occur by chance…

However, in one’s heart there is this lingering temptation to wonder if there was a deeper order behind such a life that was poetically bound.

Maybe the universe being created was just a serendipitous moment like Alexander Fleming discovering penicillin in 1928 but on a grander scale, the right elements somehow combined with just the right ones and so on until it gave rise to the RNA world? Did we just get lucky?

That’s what many scientists propound, while others refute feeling none of this could be possible without a guiding hand. Was this ‘His’ way of staying anonymous?

The truth is, when we do see anything so beautiful existing, like the cosmos it does beg us to wonder if there was a designer.

While many of us continue to debate about his existence what have the rest done in his name?

Is there any meaning to all this pandemonium we go through?

If no, it seems like a rather empty place where we spend an awful amount of time of our temporary lives trying to make marks of permanence. If you answer yes, there is some meaning, have we really made the best of our lives then?

Are we really living or just trying to make it through the days, while some of us continue in this incessant pursuit with the hope things will be better.

We’ve all wondered our place in the universe or whether there is some intricate design to this existence, a grand purpose behind the life we are leading. Almost every culture in the world mentions the transmigration of the soul. Although the concept of reincarnation seems to be peculiar to the teachings of the East, but the fact is it’s been spoken about since ancient times including by the ancient Greeks, Egyptians, Africans and even modern philosophers.

“The soul comes from without into the human body, as into a temporary abode, and it goes out of it anew… it passes into other habitations, for the soul is immortal.”

Furthermore, the works of Ian Stevenson, Elizabeth Kubler Ross, Dr Brian Weiss and Michael Newton have shed a new light on the concept of reincarnation all the while backed up with irrefutable evidence.

So if this is the case, we do indeed reincarnate and live countless lives, then why are we here after all?

And what could or what should be done with all this unshaped time ahead of us that would make us feel content before we took our last breath?