1. What is WHERE AIRY VOICES LEAD about?

Where Airy Voices Lead is a global history of immortality, from the ancient Near East to the present. It looks at the origins and development of all the different beliefs in how to achieve immortality.

So it covers the history of resurrection and reincarnation (including its lesser known appearance in Christianity, Judaism and Islam), ideas about the immortal soul, how different cultures have imagined heaven and hell, and why they originally conceived of them as places of reward and punishment in the afterlife. The book follows the search for everlasting life on this earth, and the pursuit of immortality through fame, from ancient legends such as Gilgamesh to present day cryonics. I have included a chapter on animist societies, in which the dead are believed to transform into other humans, animals, plants or spirits, and play an important role as ancestors. I also take a step back to reflect on immortality: the pros and cons of the scientific evidence, and speculation across the centuries in myth, fiction and philosophy about whether immortality is worth having at all.

One thing that stands out for me is how any culture’s beliefs about the afterlife reflect the values of that society – and how much was borrowed from other cultures, adapted and re-interpreted to fit into cultures with different values and understandings of the world. For example, many details of the Jewish, Christian and Islamic heavens, and of the Celtic Otherworld, were derived from the pleasure garden motif of classical Elysium – first mentioned in Homer’s Odyssey – which was itself possibly borrowed from descriptions of the ancient Egyptian afterlife, which by Homer’s time had been around for about two thousand years. So at every step, in the book, I have tried to clarify what the evidence and sources are, so that we can be clear about how we know something, where the ideas came from, and their contemporary context and meaning.

I have been rather worried about immortality my whole life! I was brought up as a Roman Catholic, with its promise of eternal life in heaven. As a young boy, my head span and I came close to panic when trying to imagine what living for ever and ever would really be like: millions and millions of years, and then millions more, never ending… It was scary, and it’s a feeling I have never forgotten. I suspect I feared not so much death, as the prospect of eternal life.

As an archaeologist, it seems to me that immortality – like food, shelter and sex – is one of the core elements of every human life and of every culture. I honestly don’t know of any culture, past or present, which has not expressed, in some way or other, a fascination for the idea of living forever and tried to achieve it in some way. And while some people might say that they don’t believe in any sort of immortality, and don’t even care about it, my suspicion is that everyone has at least thought about it at some point. It is something that links us to every other human being, past, present and future.

I think that as humans we find it extremely difficult to imagine our own death and non-existence: we fear the almost unimaginable prospect of having no awareness or sensation at all, of not being. This fear is perfectly normal and understandable. Many philosophers since antiquity have argued that much (or arguably all) of what we do and create is a way of overcoming death and becoming ‘immortal’ in some way – that the fear of death lies at the root of all human culture. But I am not convinced that this is true, because it sounds to me a bit like a dogma that explains everything. As an archaeologist and historian, I tend to be suspicious of single, universal explanations for human culture – the history of human societies is always more complex than any single explanation can support.

Many – or perhaps most – of the major religions try to ease this fear of death by offering some sort of afterlife, usually in return for adhering to a set of principles and actions that are deemed ‘good’. Those who do not find solace in religion might consider the alternative to death: what would living forever entail in practice, and would you really want it – especially if your body continues to age and falls apart? Tellingly, most ancient legends and stories conclude that immortality would be boring and repetitive, and in fact a curse – and that death is a better option. The immortals often end up craving death. Or you can take further solace from the Greek philosopher Epicurus, who over two thousand years ago said that, since we cannot actually experience the sensation of being dead, there is nothing to fear.

4.  Can you tell us a little bit about your background as an archaeologist and museum curator. What are some interesting findings or pieces of work you have come across that have influenced you?

For over twenty years I curated a large ancient Egyptian collection, much of which was created to immortalise individuals by preserving their names or images and helping them into a paradisical afterlife. Interestingly, I also looked after the antiquities that had been collected by Henry Rider Haggard, the author of that wonderful adventure of immortality, She, the tragic love story of Ayesha. ‘She-who-must-be-obeyed’, who lived for two thousand years after finding the secret of immortality and eternal youth, only to wither away by trying to renew its effects. Haggard had a deep interest in ancient civilizations, and collected antiquities from the ancient Near East, Egypt and the Classical world. He was clearly influenced by ancient tales of lost immortality and eternal youth such as Gilgamesh and the Classical myths, mixed in with his experiences as a colonial administrator in South Africa where he was exposed to traditional Zulu tales. It was great fun looking after what he chose to collect.

A huge influence on me was working with different indigenous groups from Australia, New Zealand and North America on the repatriation of the human remains of their ancestors. This brought me into direct contact with different, living perspectives on death, immortality and time. In these cultures, the dead – even the long dead – continue to be regarded as persons, and their consciousness remains as an animating force in the dead body, in the landscape, and in the community. None of this is theoretical – the dead are experienced viscerally on a daily basis. This had a big impact on me and on the ideas in Where Airy Voices Lead: consequently, it is not only a history of immortality, but a key theme is that worldviews, cultural norms, goals and values influence how the afterlife and immortality are understood.

5. You also talk about people trying to find symbolic immortality. What is that and why do you think that is so important? 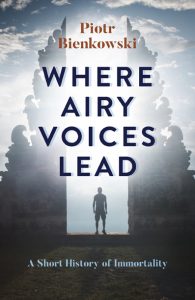 ‘Real’ immortality is an afterlife of some kind, or seeking to prolong life on this earth. It is actual living forever. But, if that cannot be achieved, there is another type of immortality: symbolic or proxy immortality, through children, fame or being part of something long-lasting that outlives the individual.

Some might say that the simplest – and perhaps the only – way to achieve any sort of immortality is in this symbolic form: to be remembered forever, by leaving some memory, legacy or heroic deed that will be remembered down the ages – whether creating an empire, becoming an Olympic champion, or writing a book. Another legacy is to have children: the individual may not survive, but the family line will, and your children will remember you and tend your grave. Already in the world’s oldest epic, in the third millennium BCE, the hero Gilgamesh, having failed in his search for real immortality, had come to this conclusion: fame and progeny are the only route to immortality.

Beyond the family, you can see symbolic immortality at work in people’s lives, through the importance of religious, national, ethnic, tribal or group identity (such as football clubs). In some ways, these can be seen as forms of immortality by proxy that offer us a chance to be part of something enduring, something greater than the individual that both precedes and outlives us and gives meaning to our lives.

One of the conclusions I come to in Where Airy Voices Lead is that, while the ancient heroes and rulers became immortal through being memorialised in epics and on public monuments, ordinary people in antiquity had their own more modest strategies to commemorate and immortalise their dead. In modern times, becoming immortalised has become different, easier, and accessible to anyone through social media. The messages are not so different from those on Roman epitaphs or the public reciting of the names of the dead in the ancient Near East. The pursuit of symbolic immortality through fame is just as important today as it was for Gilgamesh and Achilles, but you no longer have to be a hero – and we can write them ourselves without the bother of first having to be dead.

6. What has your work taught you about finding meaning and purpose in life and what advice would you have for someone who believes they will never find any meaning, purpose, or symbolic immortality?

I actually start the prologue of Where Airy Voices Lead with the question: is immortality important, and does the pursuit of it, and the attempt to defeat death, provide meaning to life? I conclude that I am not sure it does, but along the way I note that human beings, in general, have always done more than just survive. As well as eating, drinking and trying to put a roof over our heads to keep us warm and dry – and working in order to provide those essentials – we read, write, compose, play and listen to music, take part in sports, go to the theatre, cinema and on holiday, dance, sculpt, draw and paint. It is what makes life worth living.

One might argue that none of this is about the real meaning of life: these activities are about enjoying life and getting through it as best you can, but they are not what life is essentially about or for. But there are different ways of looking at this. For those who are religious, the meaning of life might be about following religious precepts and attaining the afterlife. Others create their own meaning, in terms of what makes life worth living for them, with the activities they enjoy, like going to a forest for a walk, or the difference they can make in the world – to their families, friends, colleagues, or communities.

In the book, I have tried to bring out the immortalising strategies of ordinary people as well as the rulers who ‘made history’. Some historians claim that the lives of ordinary mortals throughout history are mostly depersonalised statistics, but this has never been entirely true, and my work as an archaeologist has mostly uncovered the lives of ordinary people. We can’t all make history, but we can all make a difference, however big or small, to mark the fact that we existed, for a time, on this earth.