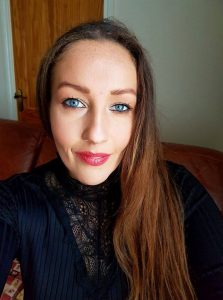 Below is my Q&A with Fiona Aedgar about her work as a karmic astrologer. For more information about her work, please visit https://fionaaedgar.com

What is a karmic and esoteric astrologer? How did you get interested in that?

I’ve been passionate about Astrology since my sister introduced me to “star signs” in the 90’s. I identified partially with my Sun sign of Cancer, but it was only when I discovered the rest of my chart that it really clicked with me. Most people know their Sun sign, but did you know that the rest of the planets in our solar system are equally as important in the birth chart? The moon sign reflects our past lives, instincts and private feelings, so it’s a mistake to only focus on the sun sign. Each person’s birth, or natal chart is totally unique to them and real astrology is never vague but is always precise and accurate. Studying Astrology quickly became an obsession for me, and twenty years on, I’m still discovering new things about my own chart! I have always been fascinated by the topic of reincarnation, and one of my skills is to identify past lives, karma, and the progress of the soul, through my clients’ birth charts. There are some important points on the chart which indicate where the person should be heading to, and the type of energy that they’re supposed to be working with, in order to grow spiritually and fulfil their mission in this lifetime.

Can you give some examples of your work and the type of impact it has had on someone?

Clients often come to me feeling frustrated that they’re not getting ahead in life as they would like to and when I examine their charts, it usually turns out that they’re working against the karmic points that I mentioned previously. When working in harmony with the birth chart, much progress can be made in a short period of time. This includes progress in many areas such as relationships, career, or general happiness. Relationship astrology is very useful as it can be used to gauge compatibility with another person even before we start dating them or to figure out why we attract a certain type of person over and over again and how to break that cycle if it’s a negative one. My clients also hire me to pick important dates for them, such as when getting married. It’s important to never get married on a Mercury or Venus retrograde and to find a date that’s compatible with both charts, otherwise the marriage may not last. The birth chart clearly shows our wounds from childhood which have a massive impact on the relationships that we form as adults. I’ve helped many clients enter happy relationships by identifying wounds that they had suppressed and emotional habits that they were unaware of. I’ve also helped my clients to find career success by identifying skills and talents that they previously didn’t see in themselves.

Have your predictions ever been “off” or wrong. How do you explain that?

I can advise my clients of the best time to take action, such as entering a new relationship, moving home or starting a new job. Astrology is a huge influence but we have to put in some work ourselves to make the most of it. For example: I see that a client will have a stellium of benefic planets in her 7th house of relationships, making it highly likely that she’ll form a romantic partnership during this time, but for that to happen, she has to allow herself to be open to dating and trying something which may be out of her comfort zone, such as using online dating sites or going to singles nights. It’s unlikely that she’ll meet someone if she stays in the house every night, watching TV, instead of making the most of this period. So my job is to identify the periods of time when the planets align to create those golden windows of opportunity. I prefer to see Astrology as “fortune making” rather than “fortune telling.” Ultimately we have free will and have to work with the universe in order to manifest our desires, and when doing so, anything is possible.

How can believing in reincarnation help us in our journey with our current life?

I find that many people have skills and talents that they’re unaware of, and we can use the birth chart to identify those. These are skills that they learned in other lifetimes and can be anything from spiritual gifts, writing, art, to wood working. We can also identify relationships with others that were formed in past lives, and what the karma is between the individuals. Reincarnation also shows us that we don’t only have one chance to get things right and that when our loved ones pass on, we will enjoy life on earth with them again.

How do you think our past lives affect our current life?

Phobias and fears can be caused by past life trauma. For example, I had a client who had a terrible phobia of snakes, plagued by nightmares involving the creatures, and we did some past life work to figure out the cause. It turned out that snakes caused a horrible death for her in a lifetime that occurred in the 10th century. Simply by talking about this death, and releasing the energy, was enough for her to make some real progress in healing her phobia. Past lives also explain why we’re so drawn to certain activites and people. For example, in my own chart, it’s clear that I’ve been an Astrologer in many lifetimes! My husband and I have some aspects in our astrological synastry that point towards relationships in previous lifetimes which explains why I felt such a connection with him within minutes of meeting him for the first time.  Sometimes, trauma from other incarnations can manifest as physical illness in the body.

What have been some life lessons you have learned about yourself through astrology?

Astrology explains the reason why I felt so unfulfilled when I was working a 9-5 job in I.T! My chart clearly shows that I need to be self employed, in full control of my job and daily routine, and working in a spiritual area that brings healing and happiness to others. I’m happy to be now doing what I love and fulfilling my destiny in helping others to navigate their lives. I also discovered how certain events in my childhood had affected me on a deep, psychological level, and how best to work with that.

Have you experienced any moments of serendipity or synchronicity in your work? If so, what was that like and can you give an example?

I often find that many different clients approach me with the same problem, during a certain period of time, or that individual clients who share an astrological placement in common, for example moon in Aries, book readings with me at the same time. This can be explained by the energy of the current motion of the planets in the skies making the same aspect in the birth charts which share some placements. I’ve also discovered some of my own soul family through my work!