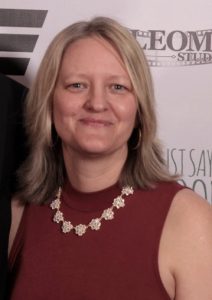 1. What is Just Say Goodbye about and how did you get interested in writing and producing it?

The film is about a high school Junior named Sarah Morin who finds out her best friend Jesse Peterson plans to take his life during summer vacation. The story came to me through a couple of experiences.

Back in 2009, an 11-year-old boy named Carl Joseph Walker-Hoover who lived one town over from me hung himself with an extension cord after suffering relentless bullying. My heart broke as the story did on the news. I thought, “Eleven??”. I had a couple kids around that age at the time. I cried.

This event brought me back to when I was in high school. A friend of mine told me he planned to commit suicide during April vacation, which was a little more than a week away. I thought he was kidding at first, but it became pretty clear he was seriously considering it.

After confessing to my mother, at her urging, I made the hardest call of my life the following day. I broke my friend’s trust and called his parents. I cried then, too. But in those days, I was a strong-willed tomboy, so crying wasn’t really my thing!

After the call, my friend completely ignored me at first. I was devastated, but at the same time I was happy/relieved that at least his parents knew, so it was out of my hands. A few days later, he finally came up to me at my locker and gave me a hug so genuine, I can still feel it to this day.

These two stories, the one of Carl and the one of my high school friend, converged on my brain. Characters and story began forming around someone being bullied, and a “what if” a teenager heard a friend planned to take his life, but instead of soliciting the help of parents, they alone tried to convince their friend not to go through with it. This was how Just Say Goodbye was born.

A few years later, Matt Walting, one of my daughter’s good friends, approached me about co-producing the script as it completely moved him. At first I had reservations since he was only a teenager, but over a couple cups of coffee he convinced me he had the film experience to pull it off. Well, I guess he was right, because he ended up winning the Indie Spirit Best Director Award at the Boston International Film Festival in 2018. He was 18 at the time, and youngest to ever earn the achievement.

2. The film deals with suicide and what we can do to prevent suicide. Do you think suicide is preventable? If so, how can we prevent it?

I don’t think there’s an easy answer to this. Depression is such a personal thing and different for everyone. While I’m just a writer, and not a clinical psychologist or psychiatrist, I do feel educating ourselves and keeping our eyes open for signs that someone is exhibiting symptoms of deep depression could possibly prevent some suicides by taking action. Action can include informing that person’s family of your concerns, or encouraging the person to reach out for professional help.

3. What advice would you have for counselors who are working with people who are thinking about suicide?

I think it’s the counselors who should be giving ME advice, not the other way around! Haha.

4. What advice would you give to someone who is considering suicide?

Without question, talk to a mental health professional.

5. What sort of challenges have you had in your life that has shaped your perspective on suicide and other issues in the film?

All three of my grown children knew friends and/or acquaintances that took their lives in high school. You don’t really know how to help them deal with that kind of loss at such a young age. I would hug them, and encourage them to talk about how they felt as much as they wanted, but I found that more so, they just wanted to be left alone with their grief. It was hard to do that.

The film also tackles the subject of bullying. I was a victim of bullying at various stages of my school career, like so many other students. And, yes, as I grew older, I realized at times I was complicit in bullying as well. I think the potential effects of bullying being brought to light through bullying awareness these days is a great thing. When I was in school, I don’t we thought very seriously about how making fun of someone could damage that person’s self-esteem and negatively impact their mental health. 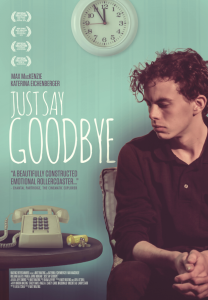 6. Have you had any experiences of serendipity or synchronicity during your making or distribution of the film?

When we were first raising funds during the pre-production phase of Just Say Goodbye, I saw on social media that an old college friend was spending time at a retreat within a 45 minutes of where I lived. I hadn’t seen her in years as she resided far away in another state, so I asked her about getting together for dinner.

As we were catching up, I told her about the film project. She felt her ex-husband Jeff Simons might be interested in the production since he was a two-time Emmy winning cinematographer/producer. Even though we were producing on a micro-budget, because of Jeff’s close personal experience with suicide, he jumped on board. With his experience and massive array of film equipment, his involvement completely upped the production value of the film.

7. What sort of response have you got from the film?

It’s definitely not a Marvel movie with a multi-million-dollar budget, so due to the micro-budget, we have had some film critics who focused more on the technical flaws of the movie. It was intentionally filmed as a slow-burn, character-driven drama. We wanted our audiences to FEEL for Jesse. And you can’t really feel for someone until you get to know them deep down.

That said, overall, the response to the story and the message has been amazingly positive. Some saying the film is one of the most honest dramas they have seen in a long time. And it is hitting emotions across cultures. Our Facebook fan page continues to grow…with many fans from Egypt and China!

Yes! Our film is now streaming on Amazon Prime and Fandango Now. DVD’s are also available through major online outlets like Best Buy, Target, and Amazon, so we hope people will check it out and spread the word. And we encourage parents in particular to watch the film with their teenagers and start a dialogue. Such as, what would they do in Sarah’s situation? People should know up front, this is a dramatic feature film, and not intended to be an instructional video on how to deal with bullying and depression. But, it should spark important conversations.