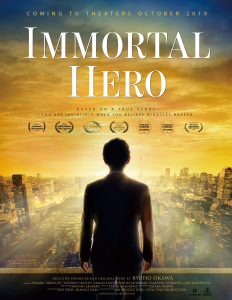 1. The movie “Immortal Hero” is based on a significant period in Ryuho Okawa’s life. Who is Ryuho Okawa?

Response:  Master Ryuho Okawa, Founder and CEO of Happy Science was born on July 7, 1956 in Tokushima, Japan.  After graduating from the University of Tokyo, he joined a Tokyo-based trading house. While working in the New York headquarters of the trading house, he studied finance at the Graduate Center of the City University of New York.  In 1981, he attained Great Enlightenment and awakened to his true mission to bring happiness to all of humanity.  In 1986, he established Happy Science in Japan. Happy Science is one of Japan’s fastest growing and most influential spiritual movements. With over 12M members across more than 100 countries, it is rapidly growing on a worldwide scale.

Master Okawa has delivered over 3,000 lectures (more than 140 in English), and published over 2,500 books. Several of his books, including The Laws of the Sun, became best-sellers. As Executive Producer of ARI Production, he is responsible for the creation of 18 feature length films, many of which are based on his original stories.

2. What is Happy Science, and what are its major teachings?

Response:  Happy Science is dedicated to bringing greater happiness to humankind by uniting religions and cultures to live in harmony. The major tenets of the movement are: Study the Truth, Self-Reflection, Meditation and Prayer.  From the early days of Happy Science, Master Okawa has been teaching people to practice the basic teachings of Exploration of the Right Mind and the Principles of Happiness, otherwise known as the Fourfold Path: Love, Wisdom, Self-Reflection, and Progress. The Fourfold Path is the fundamental teaching of Happy Science, which all members repeatedly study and practice.

3. What experience in Master Okawa’s life does the movie depict, and what is its significance for Master Okawa and for the world?

Response:  Based upon true events, “Immortal Hero” is a dramatic, inspiring account of how Ryoho Okawa, teacher, healer, best-selling international author and visionary spiritual leader of the budding Happy Science movement, came to recognize his miraculous abilities and the obligation they carry to share the truth with the world.

Based on Okawa’s actual, life-changing events, and written for the screen by his daughter, Sayaka Okawa, this poignant biography recounts how an extraordinary man has ascended to become a world-changing faith leader.

Makoto Mioya is a successful, fortyish, Japanese writer and publisher living a model suburban life with his wife and three children. When he unexpectedly collapses and must be rushed by ambulance to the hospital, it becomes a desperate race against time. Tests show that Makoto’s heart is not pumping. His examining doctors are dumbfounded that Makoto is alive and fearful that he will not survive the grave heart condition they have discovered. However, as the doctors tell his family to prepare for the worst, Makoto has other plans.

Unbeknownst to anyone but Makoto, he has been communicating with powerful spiritual beings of the ages and accessing their wisdom and advice for most of his adult life. In a near-death visitation at the hospital, the spiritual beings come to him to remind Makoto that he can cure himself with the power of his own mind.

His wife and young doctor don’t believe this is possible, so they encourage Makoto to undergo a last-ditch surgery to forestall his imminent death. But an older doctor, a sage in his own right, suggests that Makoto has the right to try and heal himself by whatever extraordinary means he can, even if it means foregoing medical treatment.  Makoto surprises everyone and begins recovering, channeling the powerful wisdom from beyond and his own willpower. He miraculously reverses the effects of his fatal heart condition and recovers completely, to the amazement and gratitude of his wife and children.

As part of the recovery process, Makoto writes about his powerful ‘rebirth’ as an enlightened and transformed teacher. He promises to use the second chance at life he has been blessed with to make a positive difference for as many people as possible. He commits to ‘die for the truth’, a powerful covenant that defines the purity and intensity of his message of love, our mutual responsibility for each other, and world peace.

But some people doubt the power of his healing wisdom, including his wife, who begins to feel separate and apart from the loving husband she once thought she knew. And, as he travels to London amid deadly terrorist attacks to make an important speech, things at home are unraveling. His children are facing pressures of their own, without the support of the parents they love and need.

In London, Makoto delivers a powerful speech about what might be possible for a world that can put its differences aside and accept God’s love. The speech is an instant sensation, enhancing Makoto’s stature in Japan and worldwide. Yet, upon returning home, Makoto must face the discord within his own family, head-on and courageously.

Makoto considers the needs of his own family and the unwavering commitment he’s made to ‘the family of man’. As he and his family members choose their paths and their destiny, Makoto reconnects and recommits to both his family and his mission.

4. In the film, the main character, Makoto Mioya, is visited by spiritual beings a few times. In real life, Master Okawa says he is visited daily by several highly evolved beings in the spirit world and has been for most of his life. When did those visitations begin, and what spirits does he communicate with?

Response: On the afternoon of March 23, 1981, while working with an international, prestigious Japanese trading firm at the age of 24, Ryuho Okawa experienced the first spiritual phenomenon that began his spiritual awakening. “Suddenly, I sensed an invisible presence with me in the room and almost simultaneously, intuitively understood that whatever it was, it wished to communicate with me. I ran to get a pencil and some blank cards. Holding the pencil, my hand began to move as if it had a life of its own. On card after card it wrote the words, ‘Good News, Good News, Good News…’ I realized then that I had just experienced some sort of religious awakening,” recounts Okawa.

He kept his experience secret for some time because he didn’t believe such things could happen to him. When he finally divulged his thoughts to his father and brother, they encouraged him to continue his communication with the spirts and to record the spiritual wisdom he received.  After six years at the company, on June 17 and 18, 1986, high spirits descended from the heavenly world one after another to tell Okawa that it was time to pursue his true mission in life. Just a week after his 30th birthday, on July 15, he handed in his letter of resignation to devote his life to the salvation of humanity. This was the first step towards establishing Happy Science.

Over the years, Master Okawa has continued to interact with the spiritual world. He is able to call all high spirits, including Buddha, Jesus, Confucius and Socrates, as well as Lincoln, Mother Teresa, Peter Drucker, Hannah Arendt, and more. The two that are depicted in the film visiting him in the hospital are Jesus and Edgar Cayce.

Response:   He has published over 2,500 titles on a variety of topics, including self-help, success, spirituality, the power of the mind, politics, history, channeling and healing. His books have sold over 100 million copies worldwide and been published in 31 languages. Many titles have consistently ranked on the annual bestsellers list in Japan.

6. In the film, the hero heals himself and later heals his mother’s bad knee. Does Master Okawa perform healings? Does he teach others how to heal themselves?

Response:  Master Okawa does not perform actual healings, but he constantly gives lectures about healing, and some people actually heal after the lectures or even after viewing a Happy Science film.However, Happy Science believes that we tend to create our own illness.  For instance, if you have a tendency to get angry and envy others, that negative energy can create illness. So, even if Master Okawa were to perform a miracle, if an individual’s tendency does not change, s/he will revert to the same situation. Thus, Master Okawa tries to encourage people to reflect upon their actions and tendencies to discover the root cause of their condition or illness in order to heal themselves.

7. What is the message of the movie?

Response:  We created this spiritual and inspiring film especially for those who want to find hope.  Because it is based on a true story, it is a very powerful and touching film that we hope will inspire true miracles.  We all encounter suffering and difficulty in our lives. It is our hope that anyone who watches “Immortal Hero” will realize that with belief and the power of the right mind there is hope, that God exists, and that the God of love watches over us constantly.

8. Who should watch this film?

Response: We want everybody to watch the film, but especially those who are suffering from illness or loneliness. Whatever you are encountering now may be tough, and you may think your life is meaningless. We want whoever watches this film to be reminded that their life is important; they are born with a mission and they are loved by God.

9. Happy Science has produced several movies through a media entity called HS Pictures Studio. The US subsidiary, HS Productions, is bringing “Immortal Hero”, the group’s 17th film, to the US and Canada. Why has Happy Science chosen to spread its message through film?

Response:  There are several reasons Happy Science has chosen to spread its message through movies. Many people in Japan consider new spiritual/ religious movements “dangerous” because a few nefarious new-religion groups in the country have instigated terrorist acts in the past. Therefore, many people tend to pre-judge any new movement without researching its teachings and practices. Happy Science is using entertainment mediums like film to try and reach beyond the blinders people have put up to show them that not all spiritual/ religious organizations are evil and that Happy Science is here to enrich everyone’s life, regardless of their faith.

We create movies to let people know who we are, but we also make them to help those suffering from personal hardship and illness. Just as reading books can be advantageous for finding solutions to perceived problems, so can good films offer insights to answers people are seeking.

We also believe there are too many dark and offensive films being aired these days. Our hope is that our films will help counter the negative influence of those films by lighting the darkness with bright, inspirational content.

Based on a true story, the new spiritual film, “Immortal Hero” which opens in theatres in the US and Canada this October, is a dramatic, inspiring account of the near-death experience that inspired Ryuho Okawa, the founder of Happy Science,  to choose life and change the life of millions. www.Immortal-Hero.com