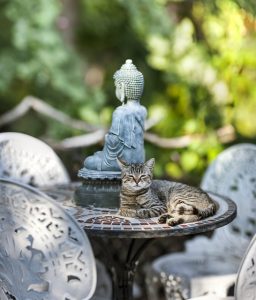 Cats are one of the most loved pets, especially in American households. In fact, in the National Pet Owners Survey conducted by the American Pet Products Association (APPA) in 2017-2018, it was found that from among 85 million families who have pets, 47.1 million have cats. Such number ranks second to dogs, which are owned by 60.2 million American families.

On the practical side, it’s no wonder why cats are among the favorite pets – they are cute, playful, easy to maintain and keep the rodents away.

However, the benefits of having a cat do not end with just these(you can find additional content at Miauland, a site dedicated to answering your questions about cats).

Psychological and Spiritual Benefits of Having a Cat

Here are more benefits for cat owners, particularly on the mental and spiritual aspects.

Typically, the sound frequency of cat purrs range from 20-140 Hertz. Based on scientific studies, such sound frequency causes lowering of stress level, decrease in the symptoms of dyspnoea, lower blood pressure, bone, muscle, tendon, and ligament healing, 40% less risk of a heart attack.

Thus, cat owners are found to live longer than those without pets.

Should you lose a loved one, a cat can serve as a company and social support as you go through your difficult times. You may freely talk to your pet and express your grievances, heartaches, and the like without the fear of feeling judged. After which, you will be able to move on more quickly.

Not only are they great during the hard times, but cats are also great pets to have for your ordinary days. They are affectionate and playful without making you feel guilty when you leave them. Most probably, they will sleep until you come back home again. Moreover, once you arrive, you will immediately feel their fur upon your legs.

Based on some studies, cats showed that they remember the kindness you explain to them, and they tend to return the affection later on.

If you want to have a human companion or a significant other, it doesn’t mean that you have to get rid of your cat. A British research discovered that 82% of women tend to be more attracted to men who like animals.

More so, 90% of single women perceive men who own a cat as nicer ones compared to others who don’t.

In a 2016 survey conducted to 1,000 British pet owners, it was found that 54% of women prefer to sleep with their pet(s) than with their partners. They further shared that with a cat, they sleep better as compared to when they were sleeping with a human.

This was supported by a study conducted by the Mayo Clinic Center for Sleep Medicine in Arizona. Survey participants share that sleeping with their pet make them feel cozy; another commented that a touch from her cat in the middle of the night is soothing and comforting.

On the other hand, only 20% believes that pets cause disturbance as they sleep.

If you’re having a child soon or planning to have a child, it was found by the National Institutes of Health that babies who are exposed to a cat are less prone to allergies as they grow up. They stated that “high pet exposure early in life appears to protect against not only cat allergy but also other types of common allergies, such as an allergy to dust mites, ragweed, and grass.”

In this case, it’s “better” compared to having a dog in terms of carbon footprint. Since dogs need more food throughout their lives, they leave eco-footprints similar to that of a land cruiser. Cats, on the other hand, eat less; and as such, their eco-footprint may be compared to that of a tiny hatchback.

Given all these, we hope that you will look at your cat with new lens. Although they’re not asking for much attention, it will only do you well if you care for them more.