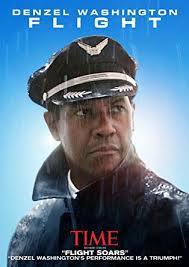 “Flight” stars Academy Award-winning actor, Denzel Washington as an airline pilot who struggles with issues related to drug and alcohol addiction. Washington gives one of the most stunning and notable performances of his illustrious career in this film, it even gained him an Oscar nomination for best actor, along with a list of other nominations from notable entities.

“Flight” tells a powerful story of addiction, depression, triumph, and acceptance. It is a movie that can help anyone feel inspired, especially those struggling with similar issues. However, even for those who are sober, it is still a great experience.

Denzel Washington plays Whip Whitaker, a pilot whose struggles with drugs and alcohol are apparent within the very first scene of the movie when he snorts a line of cocaine to help him wake up and get through his hangover. The issue comes even more into view when, after boarding the plane that he will be piloting, he addresses the passengers about the upcoming flight while making a cocktail for himself and disposing of vodka bottles in the plane’s trash can.

Eventually, Whitaker makes his way to the cockpit and has his copilot take over while he takes a nap. A few scenes later, the plane experiences a mechanical issue and goes into an uncontrolled dive. Despite the chaos of the moment, Whitaker stays calm and attempts a number of emergency maneuvers to get the plan back under control. After a number of failed attempts, one of his maneuvers works and he is able to level the plane out before crash landing in a field.

Whitaker wakes up in the hospital following the emergency landing and a colleague explains that he saved a lot of lives with his piloting skills, however, a few passengers on the plane still perished.

The rest of the film follows Whitaker as he deals with the consequences of his substance abuse and the aftermath of the plane crash. His life becomes intertwined with another individual who is dealing with her own substance abuse problems.

Following the crash, Whitaker has gained media attention due to his heroics and they are even camping outside his hospital and home. Choosing to avoid this, he sneaks out back and goes back to his father’s old farmhouse. In an attempt to clean up his act, he goes through the house and disposes of all the alcohol and drugs that he finds.

Whitaker eventually learns that his blood was taken following the crash and they found an elevated blood alcohol level and cocaine in his system. While his lawyer will fight these findings, Whitaker could face charges of manslaughter and may receive jail time and a loss of his pilot’s license. Upon hearing this, he heads to a liquor store and spirals back into his self-destructive ways.

Eventually, his situation becomes worse and one night he even ends up drunk in the neighborhood of his ex-wife and son. They demand he leave but he refuses, the police are called to handle the situation.

Whitaker’s investigation eventually leads to a hearing date in which he will have to testify on what happened the day of the crash. Whitaker gives in to his lawyers and colleagues and allows them to escort him to a hotel room that has been cleaned out of alcohol and has a security guard outside the door.

Despite these measures taken to prevent Whitaker from using alcohol, he is still able to find a way. He wakes up hungover. His lawyers are beside themselves but eventually, contact Whitaker’s drug dealer to help him get himself back to his personal equilibrium with cocaine.

Whitaker goes to the hearing drunk and high on cocaine.

Eventually, the hearing reaches a breaking point in which Whitaker can get away with his crimes if he says that one of his coworkers, one who died in the crash, was the one who used the empty vodka bottles that were on the plane. Instead of telling a lie, Whitaker finally admits to his wrongdoings.

In the epilogue, Whitaker is seen over a year later. He is clean and he has gained back the trust and understanding of his son and ex-wife.

Washington’s portrayal of Whip Whitaker is one of the finest depictions of drug and alcohol addiction in recent movie memory.

“Flight” is a story of struggle. Struggle with addiction. Struggle with self-acceptance. This is a story that many people experience every day in their lives. Whatever the struggle is, it is a constant among almost all people. It is important to come to terms with the issues you may be facing and deal with them head-on. Rehab can help you deal with your struggles with drugs and alcohol.

“Flight” is inspiring because despite all the setbacks and attempts to shroud the truth, at the end of the movie Whitaker chooses to accept who he is despite the consequences he may face. His choice ends up helping him become a better individual at the end of the day.

Matthew Boyle is the Chief Operating Officer of Landmark Recovery, a chain of drug and alcohol rehab facilities. He has been working in the healthcare space for 7 years with a new emphasis on recovery. Before his ventures into healthcare, Matthew graduated from Duke University in 2011 Summa Cum Laude with a Bachelor of Arts degree. After Duke Matthew went on to work for the Boston Consulting Group before he realized his true passion lies within Recovery. His vision is to save a million lives in 100 years with a unique approach to recovery that creates a supportive environment through trust, treatment, and intervention.