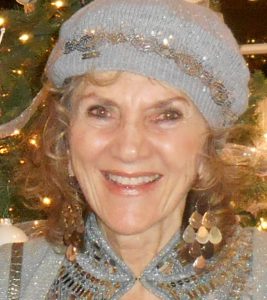 Would it be possible to create a seismic shift in our spiritual perceptions just through music and art alone?

Known for his virtuoso playing of two recorders simultaneously, David has sold more than one million CDs featuring music people often describe as “the sounds of heaven on earth.” As author of  “THE TRUE STORY OF JESUS AND HIS WIFE, MARY MAGDALENA: Their Untold Truth Though Art and Evidential Channeling,” David has undertaken a new and challenging role he never dreamed a Jewish boy from Brooklyn might have imagined or dared to attempt: to debunk what he calls “the myth of Jesus dying on the cross and then disappearing into thin air.”

David maintains that Jesus, still barely alive, was taken down from the cross by a sympathetic Roman soldier who then helped Mary Magdalena, Jesus’ wife, hide Jesus in a cart with hay and escape to a small town in France.  In Saint-Maximin, in the south of France, according to David’s sources, Jesus and Mary Magdalena lived in a cave while Jesus healed from his wounds. Jesus and Mary allegedly had three children that they left behind in the care of Mother Mary in Jerusalem—because it was too dangerous to try to take them along–and they had a fourth child in France, named Sarah.

David attributes his inside information to a series of ongoing revelations provided to him by individuals who attended his music workshops and experienced direct contact with their deceased relatives as well as with Jesus, Mother Mary and Mary Magdalena.  Other eye-opening data was subsequently transmitted to David by professional channelers, including a former girlfriend named Mimi, enabling David to have direct access to Jesus and Mary Magdalena and even dialogue with them.

Considering the power of Christian believers around the world, estimated at more than a billion, don’t you think most of them will be highly skeptical about these revelations? I ask David. I promised him at the very beginning I would not spare my own skepticism during the interview.

“Yes, of course, but I am the greatest skeptic of all,” David responds excitedly, “and I could hardly believe what I was hearing from the workshop participants or the corroborating evidence I then received through the channelers.  I doubted it myself, but ultimately the weight of the evidence was too great. I couldn’t ignore what I was seeing in the images that emerged from more than 100 pieces of art I painted during an 18-month period while performing at some 150 concerts and meditation events around the country. The evidence was overwhelming,” he emphasized,  “and I share details of that in my book.”

Born to a traditional Jewish family, David went to Hebrew school from age 10-13 and then celebrated his Bar Mitzvah. He grew up in a predominantly Jewish and Italian neighborhood in Brooklyn.  He did socialize with Italian Catholic youngsters and played sports with them, he recounted, but he never had religious conversations with them. That was a taboo subject, he explained. And in his home, he and his brothers were never allowed to say the name of Jesus. 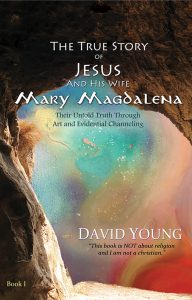 He briefly dated a Catholic girl in high school and once she convinced him to attend a mass at her church. “I remember being afraid to go into the church,” he recalls.

He studied classic guitar and business administration but after college he chose the life of an itinerant musician, playing guitar and singing in numerous rock bands around the country.  “I liked the soft side of Led Zeppelin, but I played a lot of hard rock.”

When he was 22 he left Judaism behind and embarked on a spiritual path with an Eastern orientation. “I quit drinking and smoking completely.  I didn’t even have chocolate for 30 years.  I was deeply immersed in that community, fasted every Friday, and used to play music with more than 3,000 devotees in the audience.

“The spiritual track was not new to me when I wrote this book because I have been meditating all of my adult life,” David related, but I was not prepared for the message I had been hand-selected to deliver.”

“Why you, rather than someone else?” I ask.

David acknowledges that at first he considered himself a most unlikely candidate to deliver this message. But the key lies in the music, he insists.

“Music and art are the entrée to the divine message I have been asked to share.  (If you would like to see examples of sacred art , please visit HolyArt ). Consider this. More than a million people every month are listening to my music being played in retreat centers and spas across the world. Two generations of children have grown up listening to my music as a lullaby. Who knows how many of those children were conceived while their mothers and fathers were listening to my romantic music?” he quipped. “The book I wrote includes 90 minutes of my music through QR codes that you can access through your phone.  Each one of these books is a transmitter of that heavenly energy through the vibrational sounds of the music, through the heavenly colors of the artwork, and the truth of what Jesus, Mother Mary and Mary Magdalena want people to fully know about their lives.

“During my performances, “ he continued, “over 1,000 people have experienced Jesus.  They have come forward voluntarily to say that during the concert they have connected with their loved ones who passed and many have also experienced healings.  They also related that they had fun in dialogue with Jesus and that he has a sense of humor.

“That was my experience as well when I first dialogued with him through channelers,”  David recounts.  He vividly remembers his initial conversation with him.

“I told him it was awkward for me to speak with him because I come from a Jewish family and I have never been close to Christianity.”  Jesus’ humorous response was not lost on David. “I can understand that,” Jesus said.  “I grew up in a Jewish family also.”

Jesus, the man, had many messages to relay to David but his main message was an interfaith message, the one David was being asked to share widely through his art and his music:

All of the ascended masters: Jesus, Moses, Mohammed, Krishna, Buddha, etc. and the Archangels are on the same team.  They like to be called “the heavenly team”. What people think of, as God, is actually a heavenly team because when people experience that huge light and God’s love and everything beyond, they’re not actually experiencing the Creator, they are experiencing the ascended masters and the archangels appearing to them as representatives of God.  And they’re all on the same team.

The point of the game is to win the game. And the way the game is won is by having more light-workers and positive people around the world contributing to the uplifting of humanity.

David Young is not concerned if everyone will accept his revelations.  “Enough people will resonate with what I am presenting”.  Most important, he said, is the desire of the heavenly family to reveal the truth. “Jesus did not die on the cross.  He did not die for our sins.  You don’t need a leap of faith.  You don’t have to believe in that myth.  If you want to talk to Jesus, you can talk to him directly.  The great irony is that Christians love Jesus for things he never said while Jewish people resent him for what he never said. The difficulty arises because what most of the world said about him for the last 2000 years is not about him. It’s about what they think about him.  If you could ask Jesus for a wish for us, he would say for everyone “to love and accept one another without judgment.”

Jesus was arrested for “disturbing the peace,” David concludes,  “but he was actually trying to share the peace.”

Honored internationally for her interfaith activism and leadership, filmmaker/journalist Ruth Broyde Sharone is the creator of INTERFAITH: The Musical. (interfaiththemusical.com) She pioneered ground-breaking interfaith pilgrimages to the Middle East in the 90s and served as Co-Chair of the Southern California Parliament of the World’s Religions for 10 years. Her documentary, God and Allah Need to Talk,and her interfaith memoir, MINEFIELDS & MIRACLES, have received multiple awards. She is a regular contributor to the on-line magazine,The Interfaith Observer, and also a co-author of  the 2018 best-selling Amazon book, 21ST CENTURY VOICES: Women Who Influence, Inspire, and Make A Difference.