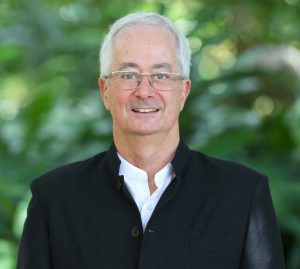 Q.1. What is Bodies of Consequence about and why did you write it?

‘Bodies of Consequence’ is a unique story that describes what happens to us when we pass on to the next realm. It explores our ‘evolution’ in the hereafter – as a consequence of the actions we took in life – told through the interwoven paths of three generations of a family.

I believe that each reader’s interpretation of the book will be very different. It will be flavoured by the depth and form of their religious and spiritual beliefs. It may even challenge one’s belief in the hereafter … who knows. Ultimately, it is a book about consequences of our actions on earth that go beyond the deeds themselves – and impact on people and situations that may never have been considered.

The story has its origin as a short story. One I had written a couple of years ago. About twelve months ago, I kept having these ‘inner promptings’ to write more. It was my inner-voice telling me that there was much more to do … so I listened … and I wrote. It was an irresistible force. It was a story that just had to be told … if you know what I mean?

Q.2. Two of the main characters were in the military. How did you get interested in writing about the military and Veterans and how did it influence the story?

Whilst the principle characters in Bodies of Consequence are in the military, my intention was not to write a book about war and death. My intention was to write a story about life. For me, the war settings in this novel are a metaphor for ‘everyday’ life. The actions we take, the choices we make, the effect (known or otherwise) of what we do to others … how we make them feel as a consequence of our actions. The book also confronts the necessity of ‘facing our own inner demons’.

I have used the military characters because they highlight the extremities of life under duress … the taking of another’s life, the devastating impact of war on families, the atrocities of war, etc.

But, for me, the characters could have been an accountant, stockbroker, or a plumber – but I guess that would not have been quite as dramatic.

Q.3. You chose to write this novel, where did the inspiration for the characters and the story come from?

You know, Matt, this is my fifth published book and my usual modus operandi is, before commencing, to map out and plan the structure and characters so that I know where the story is heading. The amazing thing was, in this case, I had no idea.

What transpired after that was I just sat, not really knowing what or whom I was going to write about. I just let it ‘evolve’. If I tried to look too far ahead into the story’s development I couldn’t see anything. Each time I just sat and allowed the story to evolve in its own way. It was quite a wonderful journey in the unfolding … I really never knew what I was going to write before I actually did it. In many ways, I believe the story to be divinely inspired. I would often finish a chapter or a segment and go, “Oh, my God, where did that come from?”.

Having said that, I did take initial inspiration from a movie. It was a movie about an actual war veteran – a sniper who was a hero to his nation. What impacted me about the movie was the Veterans’ willingness to, at all costs, protect his buddies and to take actions that he believed were the ‘right thing to do’. It portrayed how he was willing to stridently ‘face his maker’ for the consequences of his actions. In other words, he was willing to take the actions of a sniper in the belief that what he did was right. In many ways, this movie gave me the inspiration to write a story about heaven and what happens after we pass on to the next realm.

Q. 4. Bodies of Consequence focuses on life-after-death experiences. What exactly does that mean? And, what do you think happens to us after we die and what influenced your beliefs?

Do you remember, on page 106, Matthew Cooper experiences dolorous pain when he confronts ‘the disfigured man’? The man he shot and caused so much pain after he ‘missed’ … he did not kill him, rather, the man survived in pain.

This example underlines one of the two foundational premises that support the book. The first is, “We are all one”. This arises from the tenet, “What you sow, so shall you reap”. What we cause to effect in others, so shall we experience … this is because I believe, we are all one in spirit. In other words, we must face/confront and be accountable to the consequences of our actions … in life as it is in heaven … how else can we evolve into love? … to realize who we really are. This is eternal life’s greatest paradox, ‘love returning unto itself’.

The other important descriptor of heaven in the book is that ‘there is ‘no escape, no obfuscation’ … in eternal life’s review, there is no hiding. We must face the consequences of all our actions.

I firmly believe that when we die, we undergo a ‘life review’. That is to say, we experience all that we did to others. Do you remember in the book I use the analogy of being inside a kaleidoscope and that really important events shine brightly and become ‘irresistible’? This signifies that these particular ‘experiences’ are ones crucial to our evolution … our evolvement in love.

My life has been blessed with having contact with a number of ‘spiritual masters’. My system of beliefs has formed as a consequence of my many interactions and readings of these great beings. In the book, I talk much about ‘the music’ – this, for me, is the ‘Hand of God’ – we are never absent the music, only awareness of its presence.

Q.5. What evidence or support do you have for your beliefs about life-after- death?

With ‘Bodies of Consequence’ I am not trying to convince or convert anybody to my system of beliefs. I merely portray them through the medium of story. It is not a book based on ‘evidence’. The wonder of this story is that it has many levels. It combines the literal with the allegorical, but it also delves into the depths of the metaphysical and mystical where the reader can feel and deeply experience their own truth.

Q.6. What did you learn about yourself as you wrote the book? 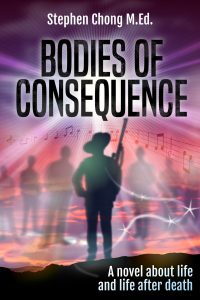 The interesting thing that has transpired since writing the book is that my own beliefs have become deeper, more enhanced. It is as if the colours have become more vivid, more alive than they ever were. It has brought a unique focus on each individual moment – everything is important, nothing insignificant.

The other really interesting thing the book has done for me is that I now have no fear – no fear of what lies behind the veil (of death). I am alive to the consequences of a life well lived and an awareness that each moment (on earth) is a precious jewel.

Q.7. What are you hoping others will learn or take away from your book?

The words and stories in ‘Bodies of Consequence’ are from a source I can only assume works in our favour – to help us in some way or other. To prepare us for the consequences of the actions we have taken in this life we have chosen. Deep within my being, I know this to be so.

If readers of the book seek to change for the better their lives and the circumstances of the people who cross their path, then, so much the better. If enough people do the same then the world becomes a preferred place and the individual has fulfilled their divine purpose, both in the here and the hereafter. Let the small ripple of love become a tsunami – after all, we often do not know the consequences of our actions.

I have also written ‘Bodies of Consequence’ into a feature-film screenplay. But only God-knows if it will be produced into film. We shall see what the divine unfolds.