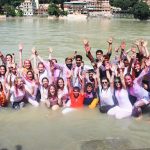 Traveling to India on a Yoga Teacher Training expedition is the beginning of a transformative journey that lies ahead to welcome you to its full potential. As the starter moments of ‘culture shock’ begin to subside, the sheer untouched beauty and sacredness of the place, its traditions, and people begin to surface soon after. A Yoga Teacher Training in India is not a mere program but a journey that yogis come to embark upon from various corners of the globe. Whether the desire is to evolve into a complete Yogi or to become a great teacher of the discipline, a Yoga program in India helps establish these goals and gives so much more. If you are traveling to India, then you should look for the best luggage brands to help you travel.  The range of outcomes and experiences may vary for each one of us since we are all individuals, but a series of mental, spiritual, and physical transformations unravel for each yogi in different forms. So, what is it really like – doing Yoga Teacher Training in India?

Connecting with the Soul of Yoga

Yoga and India are two bodies joined in a single spirit where one would simply cease to exist in its true form without the other. Why would they not be? Yoga is the legacy of India, the country being the mother bearer of this great mind-body science. Its origin can be traced back to more than 5000 years to the time of the Indus Valley Civilization in India. The science has continued to flourish and nurture ever since. This is the country where yogis are born as the science continues to descend from generations to the next in its original form. During the YTTC here, you do not learn Yoga, you come into ‘Yoga’ within and the celestial.

Embracing the Purity of Nature

The home of the Himalayas, the land of sacred Ganges, a country divided by its diversity of weather, culture, and topography, but assimilated in the spirit of Yoga and love greets each Yogi with open arms. Whether you are a mountaineer who dreams of dwelling in the greatest mountains of the globe that are also the home of Lord Shiva (the first Yogi of the Universe) or someone who is enthralled by the serenity of the beaches, dense rainforests, and tranquil backwaters, a Yoga expedition in India is full of the most mesmerizing landscapes and dreamy nature’s treasures.

Being under the Shadow of the Gurus

When we are talking Yoga in India, the presence of the honorable descendants of the science in the form of yoga gurus and masters is the next thing that strikes the mind. Be prepared to unlock the hidden potential of your body and mind as you come under the guidance of these teachers and gurus as the YTTC unravels. Unlike the west, the teachers here place a mutual prominence on each aspect of Yoga – Physical, Mental, and Spiritual.

Finding a Blend of Traditional and Globally-Recognized Experience

The yoga schools in India (the best ones) impart Yoga Training that is not only traditionally authentic but is also in line with the set standards of Yoga on a global spectrum. The purpose of offering this fine blend is to make sure that a Yoga TTC graduate from India not only takes back authentic learning of Yoga but is also eligible to share his or her experiences as a certified teacher of the discipline anywhere in the world. A certified Yoga TT graduate from India is at the liberty to contribute to the yoga community as the preacher of the science across the globe.

Living With Entities from Different Corners of the Globe

India witnesses a number of yogi travelers each season. Hence, you shall come across people from various corners of the worlds as your batch mates. Living with these entities is a unique experience of its own where you get the chance to meet people who might share the same interests as you do. Engage in discussions with them as you build eternal bonds with them. People even find their soul mate here. Yoga symbolizes eternal love with the ‘Self’ and ‘life’.

Discovering the Body and Its Spirit

A YTTC expedition in India is all about exploring the Self so that a point of union with the power of the universe can take place. Not just physical Self, the program is also about discovering and further honing the command of the mind, body, and soul in its true form. Do not be surprised if a certain distress does not seem to bother you as much as it used to before you underwent the program. This just means that you are truly embracing the power of Yoga into your life. 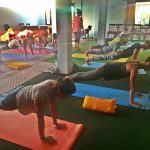 Ah! Getting introduced to Yoga’s sibling ‘Ayurveda’ is another major aspect of the Yoga Training program in India. Ayurveda is the ancient-most medicinal system of the world that was developed in India around 5000 years back right after Yoga. The science is used for treating multiple ailments and disorders. It is also applied in amalgamation with yoga practices for achieving target outcomes. Ayurveda is a major component of YTTC journey in India.

Exploring Yoga without Compromising the Bills

Even if you are well-off and money is the least of your concern, if there was a chance that quality and reliable cost were parts of the same package then we would not like to miss it for the world. And, this is exactly what a Yoga TTC in India has on offer.

Be ‘whole’ with Yoga in India!

Author Bio :Bipin Baloni is a passionate Yogi, Yoga Teacher and a Traveller in India. He teaches Ayurveda Courses India. He loves writing and reading books related to yoga, health, nature and the Himalayas.