Margaret Winslow is a field geologist with over thirty years experience in Central America, South America, and the Caribbean. Her fascination with donkeys in rural areas evolved into a quest to fulfill a long-forgotten childhood dream of owning one. She holds a PhD in geological sciences from Columbia University. Her National Geographic–funded fieldwork on earthquake hazards and archaeological settlement patterns in Alaska and Chile is featured in the award-winning PBS series “Fire on the Rim.” She is professor emerita of earth sciences at the City College of New York and resides in the lower Hudson Valley. Her donkey, Caleb, boards nearby with fifty horses and ponies, where he continues to steal the show every day. During the holiday season Winslow is frequently asked, “Could my church borrow your donkey for a nativity show?”

Caleb is much in demand and is a huge draw at local charity horse shows and races, as well as churches and libraries. He receives typing assistance from his owner and can be reached through www.MargaretWinslow.com

Why did you decide to get a donkey?

As a geologist and a professor at an urban university, I found myself at a crossroads at the start of the new millennium. After thirty years of fieldwork in South America, Alaska, and the Caribbean, numerous back injuries had taken their toll. I was looking for the perfect animal companion to help navigate the next phase of my life. Most people would choose a cat or dog. I chose a donkey.

Every Christmas, starting at age five, I had pestered my parents to buy me the “Genuine Mexican Burro” that was advertised in the Sears catalog. The brown -and -white drawing featured a small shaggy pony-size animal with rabbit ears. The first time I turned to the page and saw the burro’s huge dark eyes gazing shyly toward the viewer, I was mesmerized. I felt an intense yearning that was impossible to describe. For several years I begged my parents to get me this donkey until, finally, under the tree one Christmas morning, I found a large gray stuffed donkey. I later became horse-crazy and took riding lessons, until at age twenty, I was thrown and injured, which resulted in a decades-long avoidance of horses.

I first came across live donkeys decades later while working as a field geologist in the Dominican Republic. The comical ears brought back memories of that long-ago Sears ad and their playfulness with each other in the harsh environment fascinated me. Moreover, their steadfastness in the face of harsh working conditions captured my heart.

But that only partly explains why I became the owner — or should I say unwitting wrangler and straight man — of a seven-hundred-pound donkey.

When I returned home from the field in the spring of 2001, I found several donkey -and -mule organizations and magazines. According to the rapidly growing pile of books and articles I acquired, donkeys were steadfast and safe to ride. But other adjectives that experts used to describe these un-showy animals — affectionate, playful, smart, undervalued — struck a chord deep within me.

In what ways has your donkey changed your life? Your life’s outlook?

Caleb challenged me to accept his true nature — and helped me rediscover my own. First, he showed me that he was not a wannabe horse. Soon, though, he made it clear that he was a unique individual—with his own ideas and a wicked sense of humor— even when compared to other donkeys.

By forcing me to constantly reassess what I was trying to do with him, at the same time that I was reassessing my career frustrations, I began to see how much alike we were deep inside. Tenacious, somewhat single-minded, yet shy of direct confrontation. Yearning for affection, but never submissive. Wanting to achieve our goals, yet not go along with the herd.

Why did you decide to write a book about your donkey?

I had written two previous books about misadventures on the path to becoming a geologist while working in Chile during the Pinochet dictatorship. I had written about my experiences since childhood.

About ten years ago I regaled friends with anecdotes about my donkey, Caleb. They encouraged me to write the stories down. I wrote the first story —about when Caleb and I showed up at a very traditional hunter pace (cross-country race), in Mexican garb, thinking that it was a Halloween costume event. Two weeks later I was diagnosed with Stage III breast cancer. Throughout surgery and cancer treatments, I wrote stories to comfort myself and to entertain my fellow patients. 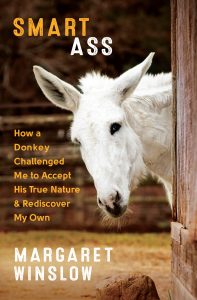 What do you mean when you write that Caleb serves as both a mirror and a foil in your life?

With rose-colored glasses firmly in place, I convinced myself that the side of me that had always felt underestimated as a woman in a largely male profession — the outwardly docile but tenacious striver — would resonate with a donkey’s spirit. That was the mirror part.

As Caleb seemed to take pride in opposing every single one of my goals for him, we matched tenacity with tenacity. Another mirror, actually, but at the time I thought of him as my foil. Thwarting every effort of this lifelong achiever seemed to be his goal.

What do you mean when you wrote: “like the medieval court jester, donkeys speak truth to power?”

In the medieval court, the only person who could make fun of the king was the court jester. Jesting evolved in Europe to a fine art of providing social commentary or even criticism hidden beneath the disguise of entertainment.

I first made that connection with Caleb from his blithe indifference to training commands and sometimes outright refusals to obey, even when doing so would seem to be to his own benefit. He would refuse until the trainer quit in disgust (this is the source of another myth about donkeys: that they are stupid) and then do the pattern perfectly. Several trainers gave up in disgust and despair over Caleb’s antics, yet he is kind and willing, and very affectionate when people respect him.

Why didn’t you buy a horse?

One of the factors that decided me: unlike horses that bolt and throw their riders when frightened, donkeys, I learned, freeze and stand their ground.

How are donkeys different from horses?

Aside from the genetic differences—they are separate species which result in differences in appearance—their original habitats played a major factor in their social structure and behavior.

Horses are herd animals. They evolved on the open grasslands of central Asia where there was no natural protection from predators. They developed speed as a survival tactic. They place the survival of the group over that of the individual. Individual horses submit to a herd leader. If faced with a predator, they will form a tight group and then flee.

Donkeys are semi-solitary, somewhat like deer. They evolved in the desert of North Africa where they had to graze over a large areas, often alone. When attacked they stand up for themselves.

How does this affect their personalities and relationships with humans?

Horses will seek out and submit to an alpha. Through intimidation and punishment-reward techniques, humans appoint themselves the leader. Almost all horses will submit to what is still called “breaking.” A broken-in horse is submissive.

Donkeys don’t seek out an alpha. They have to be independent and solve their own problems in the wild. That is why a donkey will never truly submit to a human or to another donkey and explains their reputation as “stubborn,” impossible to train, etc.

Through positive reinforcement and ample time, however, they will accept a human as a buddy.

What exactly is a mule, and how is it different from a donkey? (This question always comes up as mules are donkey-horse hybrids and many people can’t tell them apart from donkeys.)

The mule acquires the larger size, speed, and coat color (usually) of the mare, but the ears and independent personality of the donkey. They are bred because of increased muscle mass for their size, and great heat tolerance, traits they inherit from the donkey sire. “Stubborn as a mule” comes from the donkey side of the family.

When donkey owners are asked whether donkeys are stubborn, we insist that they are not. “Oh, no. Not at all! Circumspect, independent-thinkers, problem solvers who need time to decide if a command is worth following, but never, never stubborn.” Then we try not to smile.

If a person wants to ride, which is better: a horse, mule, or donkey?

There are far fewer donkeys in the US, fewer yet have been trained for saddle riding. Working with a donkey requires a LOT of patience. The expression goes: if you’re in a hurry, the donkey will take all day. That’s not to say that a well-trained donkey can’t become a faithful trail animal or perform in a ring. The critical word is: trust. Your donkey must trust you before he will obey. Otherwise, you’ll never find the gas pedal or get him to turn despite whips or other aids. Most trainers don’t understand them and will refuse to work with them.

On the other hand, a donkey won’t run away with his rider, or throw him off if frightened. He’s also slower than a horse and prefers to walk or trot over faster gaits. If safety is a primary concern, donkeys are safer than horses.

How does Smart Ass compare with other books about animals?

Of the many hundred books about dogs and cats, there are far fewer written  — with the exception of horse books — about large farm animals. In recent years, many unusual pet/ animal companion books have appeared that feature more unusual pets.

Smart Ass started out as a collection of favorite stories about the “donkey that wouldn’t”, but as I wrote, an inner story emerged. Why was someone who was raised in the suburbs and working in NYC attracted to such an unusual animal? And why and when did curiosity about donkeys interest turn into a quest?

I had to look deep inside to find the answers. Some of the factors: my tenacity, tendency to avoid confrontation, fear of failure once I took on a new challenge, are explored in the book.